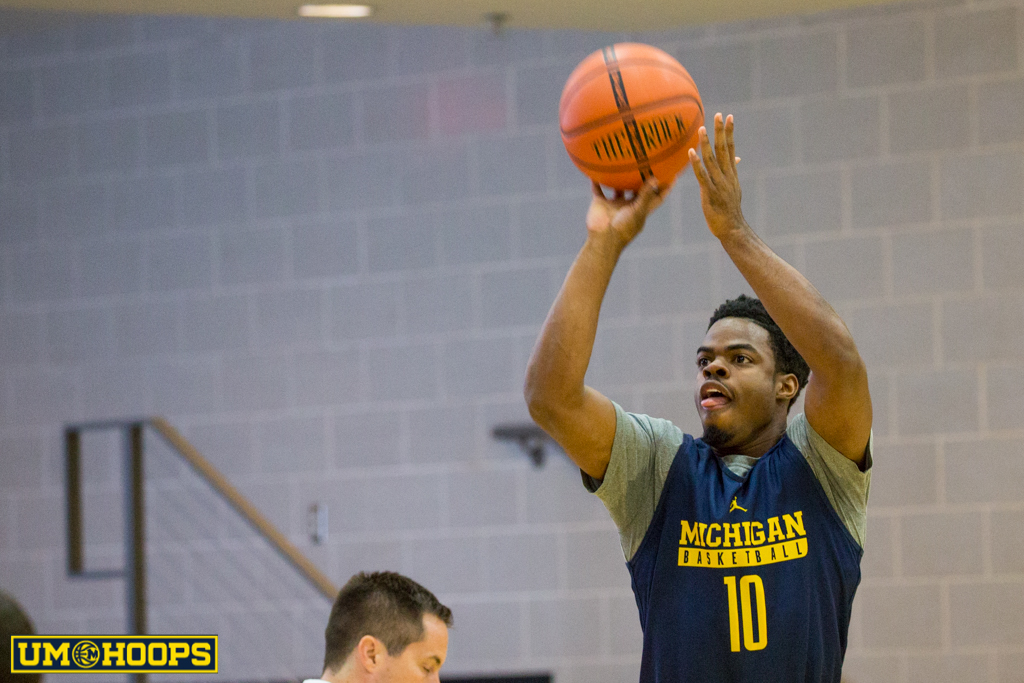 Michigan held its annual Media Day on Monday to discuss the upcoming season and provide a first look at the new roster and assistant coaches. It was only Michigan’s third practice of the season, but here are some early thoughts and takeaways.

Michigan held its annual Media Day on Monday to discuss the upcoming season and provide a first look at the new roster and assistant coaches. It was only Michigan’s third practice of the season, but here are some early thoughts and takeaways.

John Beilein was asked directly about how big of a role new assistant coach Billy Donlon would have in coaching the defense and he didn’t shy away.

“My eye and the detail that we do in offense, I think he’s got a similar eye for defense. We’re trying to combine that without confusing everybody.”

Michigan has never been a great defensive team under Beilein, but the last two seasons had been something of a rock bottom. The Wolverines ranked 95th and 99th in adjusted defensive efficiency and were among the bottom-third of Division I teams in 2-point defense. Beilein finally reached the point where he knew something had to change.

“He’s probably spoken more in practice right now than a lot of our coaches were allowed to in the past,” Beilein admitted. “And I’m not saying they weren’t allowed to… they were always allowed to talk, but maybe I didn’t give them time. I’ve tried to really sit back and say, okay, when people are shooting 47 percent like they did last year, we have to have a different mindset in practice and our players have to have a different mindset.”

Two-guard looks will be common

Xavier Simpson and Derrick Walton will play together this season — potentially quite a bit. That possibility was discussed on radio interviews this summer and brought up specifically by John Beilein again on Monday.

“Derrick knows that he’s the heir apparent here (at point guard) and Derrick is challenging him,” Beilein said. “You should look forward to seeing both of them in the backcourt at the same time, let Derrick come off and just hunt shots and have X run the team. You might see that more than you’d expect.”

Now, Michigan has only had three practices, but there’s no reason not to expect it with the head coach endorsing the approach in early October. Walton has proven that he’s a dangerous shot maker off the ball, and Simpson is coming to Ann Arbor with the intention of playing.

“I like the idea of having that quickness out there,” Beilein continued. “We have two very quick guards. When Connecticut won the National Championship with two quick small guards, it’s very appealing to us defensively to have that type of quickness defensively. Nobody has even talked about Muhammad-Ali he’s had a really good postseason, preseason and he has great quickness as well.”

Beilein praised Simpson’s ability to get to different spots on the floor with the ball.

“Here’s what I see with Xavier, he’s very very quick in small spaces,” Beilein said. “Almost like a running back that can hit the hole and cut and get into spots. He really sees the game very well, he sees what’s going on.”

John Beilein mentioned two position battles to keep an eye on in the early season in the front court. Both spots where Michigan has questions to answer, but also has experienced options compared to the freshman reserves in the backcourt.

The position battles in the front court are between between Moritz Wagner and Mark Donnal for the starting center position and between Duncan Robinson and DJ Wilson for the wing position opposite of Zak Irvin.

Donnal commanded the starting center spot for most of last year, but Wagner came on strong late and showed flashes of tantalizing potential. Now he’ll hope to put everything together as a sophomore.

“We think it’s very important that he got back to the home land, so he went back right at the end of April, but instead of coming back June 27th for the start of summer school II, he came back June 1st so he could get another month of workouts in,” Beilein said. “He had 12 weeks of intensive workouts and I’ve seen a big difference in that, his body, everything.”

As for Donnal, Beilein didn’t commit to a fifth year for the big man (“he’s a senior right now, but he does have an extra year”) and he’ll certainly have plenty to prove. The key for Donnal will be finding consistency over the full season.

“(Mark’s) been practicing okay, he’s gotta get himself in great shape right now,” Beilein said of the senior center. “But we’ve all seen what he can do, we need about 35 games like that at least from him this year.”

And on the wing, Robinson started the final 29 games of last season, but DJ Wilson has a chance to step up into a critical reserve role after roster attrition.

“He’s understanding who he is,” Beilein said of Wilson. “He’s an athlete who can shoot, he’s not a shooter who’s an athlete. We want him to be a guy that is a great defender, always giving the opponent fits. Troy Williams is a great example of what he was able to do cutting and slashing to the basket without the ball.

“He’s had a good offseason, a great fall, he’ll have a great chance. We had a lot of options at that position last year if something didn’t work. We have options still, but not as many and he’s going to get a great chance to prove himself in practice and in games.”

Michigan’s perceived toughness, or lack thereof, was a common question to players and coaches alike.

Players and coaches alike all were aware of the comments and agreed that something has to change this season. Between a chip on the shoulder left behind from a NCAA Tournament second half collapse to Notre Dame and an offseason that devoted “500 percent” more time to defense, the Wolverines seem to be serious about fixing that reputation.

But the proof is in the pudding and all eyes will be on this team — which returns all five starters from last year’s season-ending roster — to see how much they can improve on the defensive side of the ball.

Michigan enters the preseason with an empty injury report.

“No, we’re as healthy as we’ve been in a long, long time,” Beilein said. “Let’s just (knocks on wood) keep it this way.”

Michigan’s last three seasons have been riddled with injury concerns, many of which were already present in early season practices. Now the Wolverines are healthy and apparently headed in the right direction.

Asked specifically about Zak Irvin’s explosion, Beilein said that the 6-foot-6 senior is getting close despite a small bump or bruise picked up in early practices.

“I haven’t seen enough yet because we’ve just been doing drills,” he said. “But there were some indications of it recently. Hopefully he’ll be at full go today.”