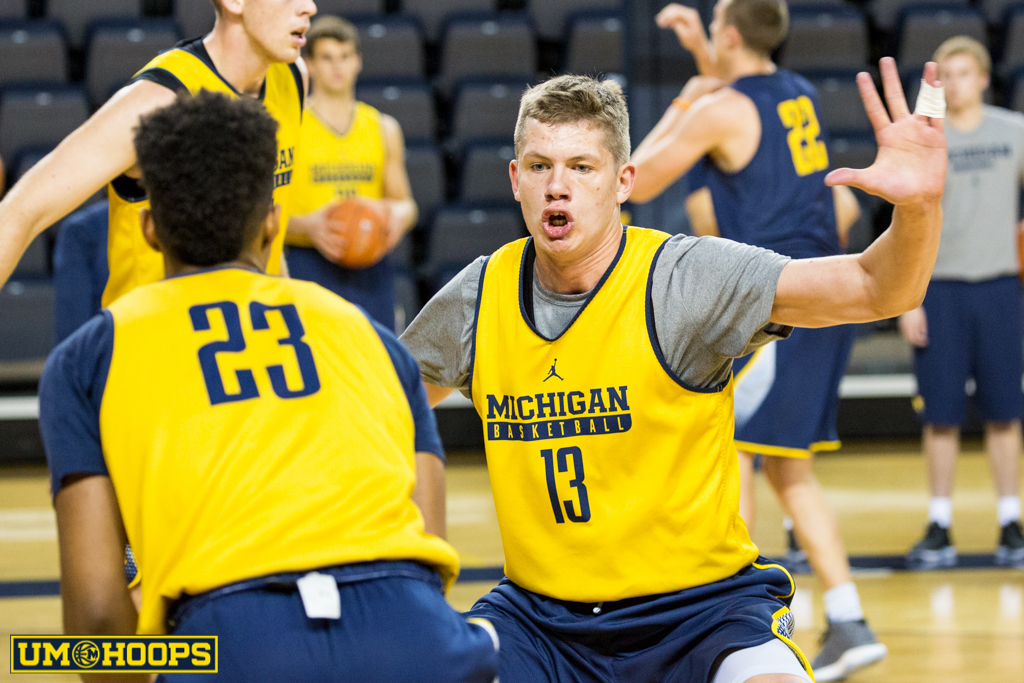 In this week’s mailbag we examine the rotation, Michigan’s non-conference schedule, Xavier Simpson and try to figure out the floor and ceiling for this year’s team.

WindsorBlue: Wagner or Donnal. Who do you think starts?

I’ll go with Moritz Wagner. He has clear and correctable issues to fix from his freshman season — valuing the basketball and staying out of foul trouble — but he also has an incredibly high ceiling. Wagner is more versatile, crafty around the basket and he has some skill to stretch the defense.

With a full season under his belt and an extra month of offseason workouts, Wagner should be ready to take the next step and he can really be the x-factor for this Michigan team to show significant improvement this season.

@Rob_BG: Assuming no catastrophic injuries, whats the ceiling/floor for this team? ..because I honestly have no idea

This is a tough one, but I’d set the floor right around last year’s season. That group never really gelled and didn’t play particularly well for long stretches, but finished in the middle of the Big Ten and snuck into the NCAA Tournament.

But I say that’s the floor because some modest form of improvement can pretty much be expected across the board. Xavier Simpson is a big upgrade at the backup point guard spot, Billy Donlon should make some tangible difference in Michigan’s defense, Zak Irvin is entering the season healthy, the uncertainty surrounding Caris LeVert is gone — there are plenty of reasons why this team should build off of that baseline.

As for the ceiling? I’m not sure. I don’t think this is a team that can win the Big Ten, but the ceiling is probably around a top-four finish in the Big Ten and a 4 or 5 seed in the NCAA Tournament.

This is one of the underrated unknowns regarding this season. Who does Duncan Robinson guard?

He was a below-average defender last season and I think it will be interesting to see how Billy Donlon works to fit him into a new defensive scheme. Michigan has routinely switched every screen one through four under Beilein, which means Robinson will probably end up guarding a bit of everything.

But you make a good point that Zak Irvin was Michigan’s primary option against opposing four-men last season. He’s not the best-equipped for that role, but he’s improved over the course of his career. I’d suspect that we’ll still see plenty of that going forward, but I think there’s an argument that if Robinson is going to develop into a replacement-level defender, it’s probably going to be at the four. He’s more likely to add the strength required to defend fours than the quickness to guard traditional wings.

@Rob_BG: How big a jump can a fully healthy Zak Irvin make? All big ten? All American?

Irvin has shown flashes of being a great player and some of his best performances were in Michigan’s best wins last season. He’s also been woefully inconsistent and has watched his three-point shooting percentages decline over the last three seasons.

I think it’s critical that Irvin enters this season healthy and expect he’ll make a leap as a senior, but I think the ceiling is probably a 15 points-5 rebounds-4 assists per game type of line. If he can improve his consistency and continue to expand his playmaking ability, I think he can crack that top-10 players in the Big Ten threshold (we pegged him at 17 in our Big Ten Top 25 preseason list with Inside the Hall).

I don’t see it. Simpson will play and play often and I expect him to see increasing minutes over the course of the season, but it would be a shock if he won out the starting point guard position. Walton is one of the leaders of this team and he’s been Michigan’s starting point guard for the last three seasons, that isn’t going to change as a senior.

kje22kje:  Seems the board is torn between –
1. we were a tourney team last year and bring everyone important back and add studs or
2. we were average at best last year and downgraded our bench to freshmen

What would a This Yr/Last Yr comparison of everyone returning and the new guys vs whoever occupied that role last year look like and your thoughts on position by position decline or improvement.

Let’s go over the additions and subtractions first.

Simpson’s addition gives Michigan an element that was sorely lacking on last year’s roster. He fills the backup point guard hole and provides more depth and defensive ability in the backcourt. Last year, Michigan was playing Derrick Walton and Muhammad-Ali Abdur-Rahkman for almost every minute at the 1 and 2 positions. Replacing Dakich’s minutes in the rotation last year with Simpson’s is a massive upgrade.

Watson (and DJ Wilson) will be called upon to fill the role vacated by Dawkins and Chatman. Both Dawkins (defense) and Chatman (shooting) had some clear deficiencies, but also had their moments and were integral in winning a few critical games.

Watson seems destined to fill Dawkins’ role — shooting off the bench — but it’s probably not fair to expect him to shoot 43% from three-point range (Dawkins’ career-average) as a freshman. On the other hand, Dawkins set an extraordinarily low bar defensively and even as a freshman, Watson should be able to perform at that level.

Beilein wants Wilson to be an ‘athlete who can shoot’ which is really something that was lacking on last year’s roster. Wilson has a lot of tools, but just hasn’t been able to put everything together. Now entering his redshirt sophomore season, he’ll probably never have a better chance.

In the post, I think it is fair to guess that one of Davis and Teske can play at a replacement level as the third big man. Doyle’s development had seemed to plateau and the hope of improvement at the five position this year probably falls on the shoulders of German sophomore Moritz Wagner.

Overall I’d say that Michigan gets a significant upgrade in terms of backcourt depth with Xavier Simpson, while the wing and frontcourt minutes probably net out to a wash given the unknowns.

ReegsShannon: Who is more likely to redshirt: Teske or Davis?

I think it is very likely that one of the two freshmen big men redshirts. Both players have their respective strengths and weaknesses and John Beilein said that whichever picks up the defense more quickly will serve as the third big man.

Teske has the obvious potential as a shot blocker due to his length and size, whereas Davis is a more physical option, described by Beilein as ‘country strong’.

I’d guess the decision comes down more to the mental side of the game defensively: who can make the right rotations on time?

If I had to venture a guess right now, I might lean toward Austin Davis just because he brings an element of strength to the Wolverine frontcourt that Michigan’s other options lack.

Michigan will play Marquette, Pittsburgh/SMU, South Carolina and Virginia Tech in November, then face Texas and UCLA in December.

The games in November might not have quite as much glamour as the December showdowns, but they’ll be very telling about what we can expect from this team. All three teams that Michigan could play in New York are projected to be top-50 level teams and a couple of wins at Madison Square Garden could jumpstart the season.

The Pittsburgh/SMU matchup in the second game of the 2K Classic could be one to give Michigan some consternation. Both were top-20 offensive rebounding teams last year and the Mustangs beat the Wolverines comfortably in each of the last two seasons (but they lose Nic Moore, Jordan Tolbert and Markus Kennedy).

South Carolina is probably the weakest high major on Michigan’s non-conference schedule, but a Thanksgiving week road trip definitely has the makings of a trap game.

As for the two higher profile games — both Texas and UCLA are projected in most preseason top-25s — I’d say that Michigan probably has a better chance of knocking off the Longhorns. Mostly because the game is in Ann Arbor and Beilein has fared well against Shaka Smart, including last year’s win over Texas in the Bahamas.

As a baseline, if Michigan can win three out of four November games and split the pair of December games then the resume should be sufficient heading into conference play.