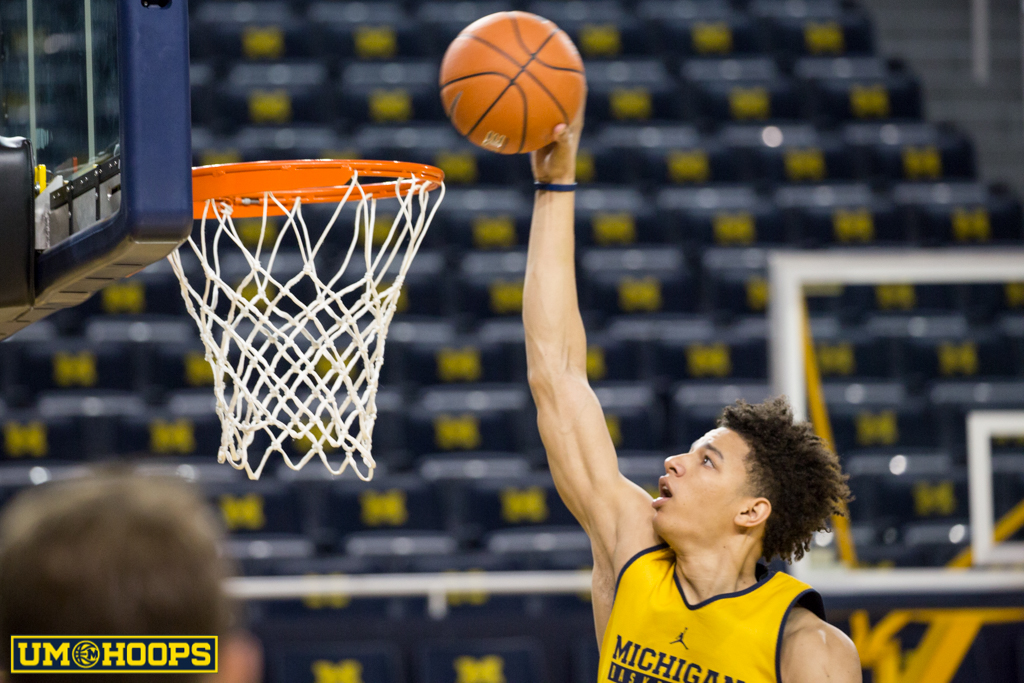 Borrowing an idea from the Illini Inquirer, we solicited over-under propositions on our forum over the last week to look ahead at the 2016-17 season.

Here’s a look at our predictions and feel free to chime in with your thoughts on any of our calls.

Borrowing an idea from the Illini Inquirer, we solicited over-under propositions on our forum over the last week to look ahead at the 2016-17 season.

Here’s a look at our predictions and feel free to chime in with your thoughts on any of our calls.

I’ll go over. Last year, Robinson shot 35.2% from three-point range in Big Ten games after shooting 55% from long distance in non-conference play. With a year of improvement, especially physically, I think it is feasible that Robinson pushes the 40% mark from long range. I don’t think we’ll see a Nik Stauskas-like jump from 37% in Big Ten play to 45%, but right around 40% sounds accurate.

O/U 70.5 KenPom AdjD ranking at the end of the season

KenPom actually modified how the adjusted offensive and defensive efficiencies are computed this year which makes it a bit difficult to estimate the actual figure, so let’s focus on the ranking. Last year Michigan was ranked 95th in adjusted defensive efficiency at an adjusted 99.4 points allowed per 100 possessions. Allowing an adjusted 95 points per 100 possessions would have moved the Wolverines into the top-40 nationally in that metric.

I don’t see Michigan’s defense making that sort of improvement, but the 70.5 ranking seems more closely handicapped in terms of reasonable improvement. I’ll go with the over though, projecting Michigan around 75-80th nationally.

This builds off of the last question and is probably the more important one.

I’m going over because we haven’t seen a John Beilein-led Michigan team hold its conference opponents below a point per possession. Billy Donlon will help, but the last three seasons there have only been two Big Ten teams that accomplished that feat defensively. Michigan can be a dramatically improved defensive team and hold its opponents to around 1.01 or 1.02 points per trip this season.

Number of games played before we will see Wilson and another big (6’10” or taller) on the floor together. O/U 1.5

Under. Beilein has told anyone that will listen that DJ Wilson is going to play as a wing this season. I’d expect him to play that position from day one and barring injuries I don’t see why he wouldn’t stay there given Michigan’s depth at the respective positions.

I’ll go under, but this one will probably be close. Donnal made 10 threes in 33 games last season (.3 per game), but did hit 8 in 18 Big Ten games (.44 per game). To hit a three every other game he’d probably have to improve his percentages (33% career) and push his attempts up to around 50 after attempting 33 last season. I’m just not convinced that we’ll see Donnal’s role grow in the offense with the possibility of Wagner seeing an increased role.

This is the million dollar question and I think you set the number right on the dot. Michigan won 10 games last season and returns the bulk of its roster from league play, so some improvement from that number should be expected. On the other hand, Michigan has one of the toughest conference slates on paper. I’ll go under, but only by a thread. I think 10 games is probably the most likely win total for this group in conference play, given the schedule.

He played 32.2 minutes per game in Big Ten games last season and averaged 2.3 assists per game. Those numbers would bump up even more if you exclude the Illinois game when Caris LeVert was healthy. The complicating factor is that Michigan really only had two players capable of playing either of the two guard spots last year after LeVert went down to injury, meaning Abdur-Rahkman played huge minutes in any game of consequence.

This year, Michigan has three rotational guards in Walton, Abdur-Rahkman and Simpson. It’s probably a safe assumption that the minutes will be distributed in that order. I’ll go with the push here, leaning under, because I think Abdur-Rahkman probably checks in right around 30, but not much higher.

As for the assists, Abdur-Rahkman averaged 2.3 per Big Ten game last year and grew as a distributor over the course of the season. That seems like a safe over bet as he continues to improve his distribution.

O/U 1.5 – Number of players to foul out of a game during league play.

My first reaction was to go with the under here, just because of how rarely Michigan players have fouled out under John Beilein, but I’ll go with the over for two reasons. First, Beilein has already agreed publicly to the fact that the Wolverines need to be more aggressive defensively and that Billy Donlon will likely have an impact in that regard. Second, Moritz Wagner is expected to play major minutes this season and he was whistled for 7.3 fouls per 40 minutes last year. Wagner needs to improve in that regard, but even if he does I think he’s still likely to foul out of a couple games.

The two recent teams that had only 7 rotational players seeing double digit minutes were 2010-11 and 2012-13. Both teams had heavy minute options at the 1 through 4 and a two big man rotation without a really proven bench option on the wings.

Assume a starting lineup of Walton, Abdur-Rahkman, Irvin and Robinson and the combination of Donnal and Wagner. That’s six double digit starters and then I think it’s safe to pencil in Xavier Simpson as a double digit option and we’re up to seven. Then the question then becomes whether DJ Wilson or Ibi Watson see double-digit minutes off the bench at the wing position.

I’ll go with the over because we’re looking at replacing about 20 minutes per game from Chatman and Dawkins and I think that means Wilson or Watson cracks double digits. If they don’t, that means that the next over-under is in play and Michigan gets very creative with the rotation.

o/u 4.5 Number of minutes per game where we play a lineup with Walton, Simpson and MAAR all on the court at once.

Thinking about the last answer, I realized just how much this possibility starts to make sense when breaking down different rotational situations. Abdur-Rahkman can probably do about as much defensively at the three as Irvin or Robinson and he gives the Wolverines a lot more versatility in terms of playmaking ability with the ball in his hands. I’ll go over here, just because I’m intrigued by the possibility. It doesn’t seem hard to argue that Walton plays 30 minutes per game, Abdur-Rahkman plays 30 minutes per game and Simpson plays 25 — especially if Wilson and/or Watson struggle out of the gate.

I’ll take the push here. Robinson is a safe bet to reach that mark and Walton checks in at 39% for his career. I think those two make it and Ibi Watson and Zak Irvin are both too hard to call right now for their own reasons.

We’ll call this the Billy Donlon litmus test. I’ll go with the over, but if it goes under then Michigan will have a significantly improved defense and Donlon will deserve a lot of the credit.

Michigan has allowed opponents to make over half of their two-point attempts for the last three seasons and I have a hard time making an argument that the Wolverines will make a significant jump in that area defensively without any sort of roster overhaul.

O/U 4.5 Michigan wins versus teams that end up making the NCAA Tournament

I’m taking the over. Michigan should play plenty of NCAA Tournament teams and beat four tournament teams last season despite so many underwhelming performances in big spots.

I’ll take the over, but it’s going to take some waiting. Michigan’s schedule is back-loaded with a ton of winnable road games: at Minnesota, at Rutgers, at Northwestern and at Nebraska are four of the last five games on the schedule.

This one is close because it’s hard to project how many minutes Wagner will play and how efficiently he’ll be able to stay on the floor without getting into foul trouble. He should reach double-figures fairly often as he’s proven that he can score when he’s on the floor, but I’ll take the under because I don’t foresee many double-digit rebounding nights.

O/U 0.5 times where JB opts not to autobench

Not really sure about the specifics of this one, but I’ll go with under if you mean the pure act of taking a guy off the court when he’s whistled for his second foul in the first half. I’ll go with the over if you mean leaving him on the bench for the entirety of the half. There’s usually one or two occasions where we’ve seen Beilein bring someone back for at least a few minutes for various reasons.

I’ll go under in the non-conference and over for conference play. The way Michigan’s schedule breaks down, there’s not a stretch of more than three guarantee games in a row and there aren’t even stretches of of six games without playing a road game. In conference play, I think the closing schedule sets up well for a potential late win streak with games against Minnesota, Rutgers, Purdue, Northwestern and Nebraska.

O/U 1.5 wins in the NCAA tournament this year

Can this team make the Sweet 16? Without a doubt. Will it? Ehhh, I’m not so sure. I can buy just about any argument why Michigan can win a pair of tournament games, but there are too many paths or explanations for why it won’t for me to take the over. I’ll go under for now until we get a better idea of just how this team is going to come together.