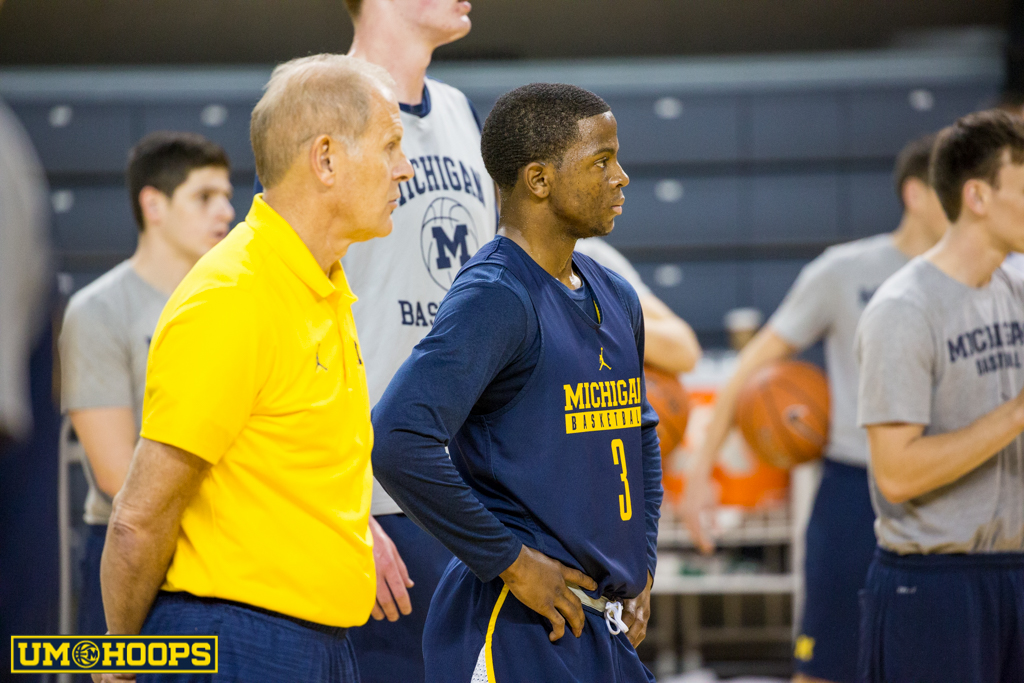 In our first of three position preview articles, we break down Michigan’s guards with stats, video breakdowns and analysis.

In our first of three position preview articles, we break down Michigan’s guards with stats, video breakdowns and analysis.

Michigan has sent six guards or wings to the NBA Draft since 2011. The Wolverines’ flowing offense, effective pick-and-roll game and outside shooting prowess slowly morphed into something of an NBA factory over the last half decade.

Michigan lost yet another guard to the NBA from last year’s roster in Caris LeVert, but the good news is that it was forced to adjust to playing without LeVert on the fly as he was sidelined for the second half of last season.

For the first time since 2010, the 2016-17 roster might not feature any pros in the backcourt, but there is still talent and experience for John Beilein to work with. The Wolverines have two returning starters and the most promising member of their freshman class to lean on in the backcourt.

Walton was snubbed from the Bob Cousy award’s top-20 watch list — a list that he made comfortably two years ago — and has almost been forgotten in the wash after an up-and-down career. An injury-ruined 2014-15 season derailed Walton’s career to a degree, but he has the tools to put everything together as a senior.

It’s pretty easy to define where Walton excels — three-point shooting, ball control, defensive rebounding and defense. Walton is an elite rebounder for his size, a skill that’s relatively unmatched at the Division I level. He’s the best returning defensive rebounder on Michigan’s roster and he was the 14th best rebounder in the Big Ten — at 6-foot-1.

It’s also easy to point to where the senior point guard needs to make dramatic improvement: scoring inside the arc.

For as impressive as Walton’s 47-of-102 shooting off the catch was last season, he made just 34% of the rest of his field goal attempts. Walton’s two-point shooting numbers have plummeted from 45% as a freshman to 32% as a sophomore and 36% as a junior. As a junior, he posted the lowest free throw rate (FTA/FGA) of his career at just 36.2% and his struggles inside the arc have hamstrung the rest of his game.

“I sense he’s going to have much-improved numbers in that area between 15 feet and one foot, where it is tough, tough twos,” Beilein said at Media Day. “Every NBA team, every college team is trying to get guys to take tough twos, right? And that’s what Derrick will have to make, right, for as long as he plays basketball.”

His problems are two-fold. First, he’s not a great jump shooter off the dribble. Walton made just 26.6% (31.6 eFG%) of his jumpers off the dribble last season according to Synergy Sports, a performance that ranks in the bottom third of Division I. While he does a great job of creating space for his off the dribble jumpers, he just hasn’t been able to find consistency with the shot.

But the biggest problem has been that when he gets all the way to the rim, he can’t finish. His two-point struggles seemed to start as a sophomore when he suffered an early season turf toe injury, but at this point it seems to almost be a case of the yips. Walton is athletic enough to grab over five boards per game, but he just can’t figure out how to score around the basket in ways that his predecessor Trey Burke was so effective.

It will be very interesting to see how Walton is used in the offense this season, especially with the addition of Simpson. The Wolverine offense is lacking a bit of three-point shooting punch with the losses of LeVert and Aubrey Dawkins, which leaves a pretty strong case to play Walton off the ball as much as possible.

“You should look forward to seeing both of them (Walton and Simpson) in the backcourt at the same time,” Beilein said at Media Day. “Let Derrick come off and just hunt shots and let X run the team. You could see that more than you’d ever expect.”

Assuming that Beilein is looking at the same Synergy statistics that we are, I’m going to take him at his word that he plans to play Walton at the two quite a bit this season.

For the first time in two seasons, Abdur-Rahkman will begin a season as a starter — the same role where he’s finished the last two.

His ability to put his head down and get a basket at the rim is unmatched on the Michigan roster. He shot 51% on twos last season despite a relatively high degree of difficulty on most of his attempts.

Quietly, Abdur-Rahkman improved in almost every statistical category from his freshman season. He raised his eFG% to 52%, cut his turnover rate in half, improved his three-point shooting and got to the free throw line more often.

The 6-foot-4 seemed to reach a new level of consistency down the stretch last season, reaching double figures in Michigan’s last seven games. Here we have a guy that many would argue was Michigan’s best player over the last month of the season, yet no one seems to be mentioning when looking at this team.

Abdur-Rahkman has already discussed approaching the game with a changed — more aggressive and confident — mindset this season and the opportunity should be there for him to take a step forward offensively.

The two areas where his progress stagnated: distribution and rebounding. It’s the distribution where Michigan will look for him to take the next step as a junior, and what will be required to see his usage in the offense increase. While he graded out in the 82nd percentile nationally scoring off the pick-and-roll, per Synergy, he found himself ranked in the 24th percentile passing off out of ball screen action.

The 6-foot-3 junior assisted just 13 baskets — 7 to the roll man, 4 to spot-up shooters and 2 to cutters — out of ball screen action in 2016. If he can improve on those numbers, the sky is the limit given his natural slashing ability.

Simpson is one of two x-factors that will determine just how much this Michigan team improves. The addition of Simpson to the mix gives Michigan another reliable ball handler and perimeter defender. It also means that Andrew Dakich won’t be in the rotation barring another rash of injuries to the guard position.

The freshman from Lima, OH should provide a spark of attitude to a roster that needs it.

“I’m definitely trying to make an effort to bring that here,” Simpson responded at Michigan Media Day when asked if he hopes to bring more ‘dog’ to the team. “But that’s really just me. I’m more of a dog type of point guard that’s going to come and knock you over.”

Simpson is a down hill point guard. He’s known for his effort on the defensive end and his ability to attack the basket in transition. He was a good finisher both in Nike EYBL play and in high school and posted a positive assist to turnover ratio on the Nike EYBL circuit. His shot has been questioned by many, and is a bit of a push shot, but he did shoot 35% from distance on the Nike circuit.

“Here’s what I’ve seen with Xavier: he’s very, very quick in small spaces, when he’s got to,” Beilein said. “He’s almost like a running back that can hit the hole and just cut and get into spots, he’s really good at that. He really sees the game very well.”

With 80 minutes to split across the two guard positions, I’d expect close to a 30-30-20 split as a baseline. While I think that Walton and Abdur-Rahkman will both probably end up playing a bit more than 30 minutes per game, I also have a hard time seeing Simpson slip below 20.

That leaves the possibility of Abdur-Rahkman sliding to the three position for extra minutes, giving the Wolverines a three-guard look. That’s an option that could give Michigan a defensive boost, but also might lack some shooting and provide interesting depth questions off the bench.

While Michigan has serious concerns defensively at the three and four position, the backcourt group has the ability to be much improved, potentially one of the better defensive groups under Beilein, who has already praised the quickness available to him.

“I also like the idea, having that quickness out there, we have two very, very quick guards,” Beilein said. “When Connecticut won the national championship a few years ago with two quick, small guards, that’s very appealing to us defensively to have that type of quickness on the perimeter.”

On the other hand, shooting with this group is a real concern. Caris LeVert was so effective in the back court because he could score at every level — off the catch, off the bounce and at the rim — and pass it too. This group has guys that can score off the catch (Walton), off the drive (Abdur-Rahkman) and in transition (Simpson), but I’m not sure there’s a five-tool player that can do all of the above.

But at the end of the day, this group will be judged based on how Derrick Walton, now a senior, performs. He’s the best leader on the roster, he’s had the ups of winning big games and the downs of bad losses and injuries. We haven’t seen him put everything together since he showed so much promise as a freshman, but this is his last chance and he has the skillset to do it.