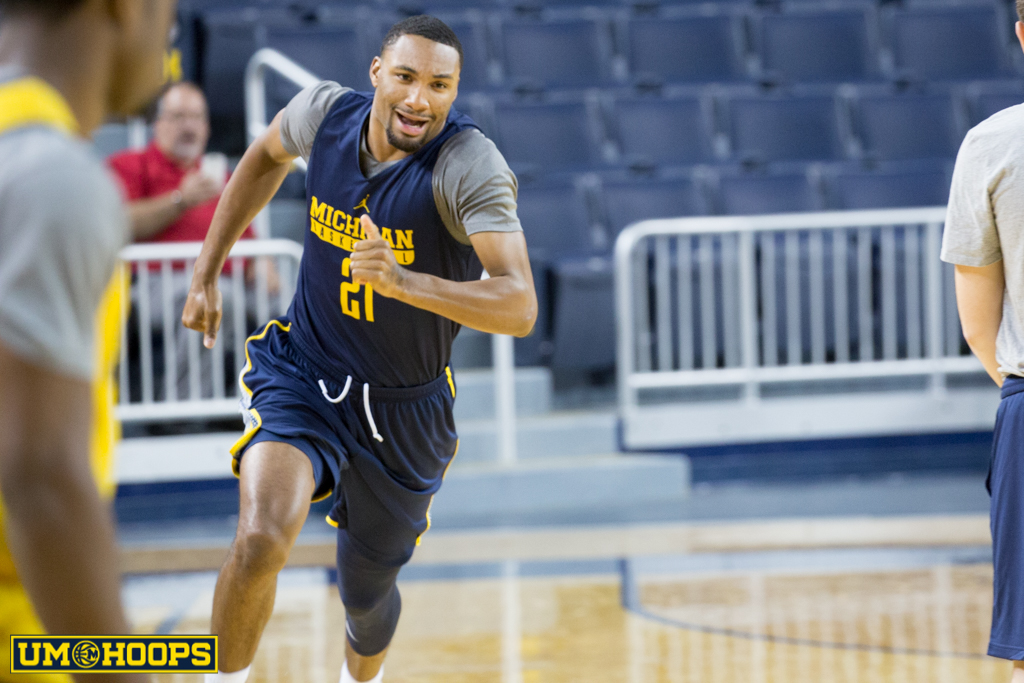 In our second of three position preview articles, we break down Michigan’s wings with stats, video breakdowns and analysis.

In our second of three position preview articles, we break down Michigan’s wings with stats, video breakdowns and analysis. Previously: Guards

Michigan’s wing group features the most tenured player on the roster, the best shooter on the roster and perhaps the two most important players that we know the least about.

The known quantities bring distinct skills to the table, but also have to answer questions about their weaknesses. As for the bench, it’s hard to even know where to start with the unknowns — Ibi Watson and DJ Wilson — because we just haven’t seen them play enough minutes.

Here’s a closer look at Michigan’s wing options this season.

Similar to his fellow senior, Zak Irvin has seen plenty of ups and downs over the course of his career. If you could pick-and-choose the good parts of each of Irvin’s season and glue them together, you’d have a hell of a player.

Irvin shot the lights out as a freshman and then he showed flashes of great distribution off of the pick-and-roll over the last two seasons. He’s rarely done everything well, consistently, at the same time.

When Irvin is on, Michigan is usually in good shape. It should come as no surprise that some of his best performances last season came in the Wolverines’ biggest wins — 22 points vs. Maryland, 22 points vs. Purdue, 17 points vs. Indiana. He’s also been a conspicuous no show in some of the most humbling losses — Irvin had an offensive rating under 100 in 8 of Michigan’s final 10 losses.

That inconsistency has been mind boggling enough that you have to wonder how the coaching staff prepares to go into this season. Can you build an offense around Irvin?

The flip side is that Irvin can do some things that no one else on the roster can do nearly as effectively. He led the team in ball screen assists (50) and Michigan posted a 71% eFG% off of his pick-and-roll passes compared to 51.9 eFG% from Walton and 41 eFG% from Abdur-Rahkman, per Synergy Sports.

He still has his flaws as a ball handler, with the tendency to telegraph his passes, over penetrate and force the issue at times, but his height gives him the most potential to develop into a consistent ball screen passer.

But Irvin, who had a 57.4 eFG% on percent on catch-and-shoot jumpers as a freshman, was one of Michigan’s least effective catch-and-shoot players on the roster last season. It’s going to be hard for Michigan to show great improvement if the 6-foot-6 senior can’t find consistency with his jumper.

What we’re left with is this weird mix of Zak Irvin’s past skills. The kid who had 12 assists to 196 shot attempts, 146 of which were three-pointers, as a freshman is now one of Michigan’s best pick-and-roll passers, but he attempted more twos than threes and posted the worst effective field goal percentage (46.9%) of his career.

Irvin has never really been a steady player, always more of a boom or bust option. He’s played significantly more A+ and C- games than B or B+ games over the course of his career. Now a senior, Michigan needs Irvin to find the balance in his game.

Duncan Robinson’s immediate rise through the non-conference season as an elite shooter was eerily similar to Nik Stauskas’s freshman year. Robinson showed up on campus and started burying three-pointers. He made nearly 55% of his threes in non-league games and shot the ball so well that his final 45% three-point shooting number felt like a disappointment.

Robinson’s Big Ten numbers certainly disappointed given the expectation he set in November and December. He made just 35% of his Big Ten threes and seemed the run out of gas throughout February.

At the end of the day, Robinson was still an elite catch-and-shoot player and I don’t see any reason he shouldn’t continue to improve in that regard.

But as pretty as it is to watch Robinson catch and shoot, it’s a bit disconcerting to see him shoot off the dribble. With Robinson, we aren’t talking about the same kind of pick-and-roll off the dribble jump shot that we see from Michigan’s guards, but his ability to master the one-dribble pull-up to attack hard closeouts will be key to his development moving forward.

And then there’s the defense. Robinson was among Michigan’s worst defenders last season and I’m curious to see how Michigan tries to hide him in any sort of adjusted defensive schemes this season.

Robinson was one of the most picked on defenders on the Wolverine roster and really struggled to close out against shooters. Per Synergy Sports, only three players in the Big Ten gave up more catch and shoot baskets off of close outs: Kendrick Nunn, Jalen Coleman and Corey Sanders. Here’s the video evidence:

So that brings us to the question of how do you carve out a role where Robinson can succeed defensively? Does he try to become quicker to guard threes? Bigger to guard fours? Split the difference and try to be good enough at both to guard the weaker of the two spots?

He’s listed at the same 215 pounds as Zak Irvin, but the 6-foot-6 Irvin has proven that he can at least hang in there and battle a bit while Robinson hasn’t for the most part. I’m not sure what the answer to this conundrum is but, similar to the Michigan defense as a whole, if Robinson can nudge closer to average than bad on the defensive end that’ll be a big boost overall.

DJ Wilson has played 182 minutes at Michigan in two years and it’s still hard to define what exactly he’s going to be. Whatever that is, he’s never going to have a better chance to prove it. With the transfers out by Aubrey Dawkins and Kameron Chatman, Wilson is Michigan’s backup four man almost by default.

The problem might be that even John Beilein and Wilson himself aren’t sure what he’s going to be. Beilein has a good idea of what he wants.

“He’s had a really good offseason in the weight room. He’s understanding who he is,” the head coach said at Media Day. “He’s an athlete who can shoot, he’s not a shooter who’s an athlete. I want him to be a guy that’s a great defender, a guy that is always giving the opponent fits.

“I told him Troy Williams is a great example, what Troy was able to do just cutting and slashing to the basket without the ball, and use your length.”

If you add a Troy Williams to the Michigan roster, you have a way better team. That’s basically the role that Glenn Robinson III filled in his own way. But we’ve also been writing for two years about how badly the Wolverines need someone to fill that role and no one has stepped up to the plate.

Wilson is a 6-foot-10, 240 pound forward who can touch 12-foot-3. He has the raw tools to fill that role, but it’s hard to say that he’s done anything to prove that he has the mindset. Running back the footage of the last 10 baskets that Wilson made (which takes us back to before Christmas), kinds of reinforces the general stereotype: a lot of jumpshots and too many layups that probably should be dunks.

Watson is the lowest ranked incoming freshman on the Wolverine roster, but opportunity is staring him in the face. If I’m Ibi Watson, I’m looking at the void left by Aubrey Dawkins and thinking about one thing: getting shots up.

It’s probably not the first thing that people think when they look at Michigan’s roster, but looking a bit closer there’s a void left behind for another shooter. Dawkins was a career 43% three-point shooter and the only two proven, reliable three-point shooters in the rotation are Duncan Robinson and Derrick Walton.

Watson is by definition a shooter, but it’s fair to question just how well he can shoot it as a freshman at the Division I level. As I pointed out in a summer Freshman Focus, Watson has basically shot right around 33-35% from three-point range at the high school and Nike EYBL levels over the last two years. He’s also put up some impressive volume at both competition levels, a pretty strong endorsement that his coaches wanted him to shoot.

Similar to the backcourt, we have 80 minutes to distribute between the two wing positions here. For all intents and purposes, they are the same position on different sides of the floor. There are some caveats, notably that at some point you’d hope to have someone on the court who can defend opposing fours, but that’s been an afterthought at times.

Irvin played 35 minutes per game in Big Ten play last year and Robinson checked in at 30. Reading through what I just wrote, and given the transfers, I don’t see how both players don’t average right around the same mark this year.

That leaves 15 minutes to be split between Wilson and Watson and I think they’ll both be used more situationally. If the matchup dictates a bigger defender then throw Wilson into the mix, if a shooting punch off the bench — and Watson is really the only shooter on the bench — is required then go to Watson.

For as much as we know about Irvin and Robinson, there are still so many huge questions that this group has to answer on an individual and group level.

It’s easy to pluck three things — Irvin finds consistency game-to-game, Robinson shoots > 40% from three, Watson and Wilson provide depth — and say that if they happen, Michigan will have great wing play. But I’m not sure how many I would bet on to actually occur.