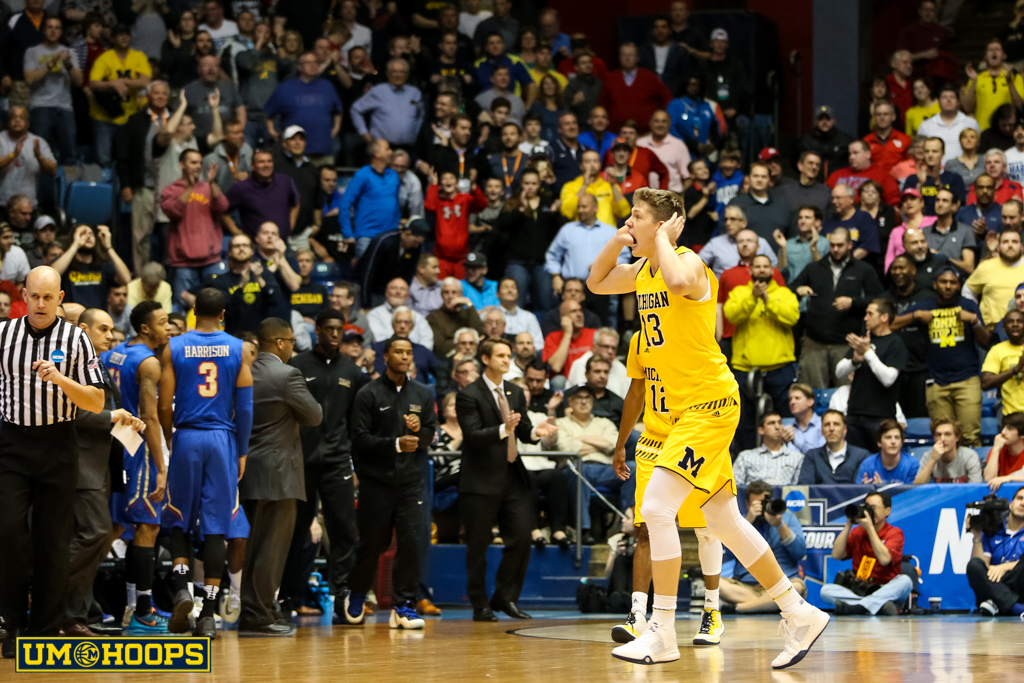 In our final position preview article, we break down Michigan’s big men with stats, video breakdowns and analysis.

At first glance, the five position in Michigan’s offense feels like an afterthought. The Wolverines run a perimeter-oriented offense that is heavy on three-point attempts and underweight on post-ups or offensive rebounds.

But more often than not, it has been the five man that really unlocked Michigan’s potential. Mitch McGary elevated Michigan in the 2013 NCAA Tournament, Jordan Morgan helped turn Darius Morris into an NBA Draft pick with their chemistry in the pick-and-roll, and Morgan anchored an otherwise terrible defense in 2014 to lead the Wolverines to the Elite Eight.

In the two seasons since Jordan Morgan and Mitch McGary moved on, Michigan has put forth two of its three worst defensive units under Beilein, including Michigan’s worst two-point defense groups in the KenPom.

If you could change any one stat from last year’s profile to try to make Michigan a better team in 2016-17, you would start with that two-point defense. Fixing the interior defense starts with hiring new assistant coach Billy Donlon, but it also starts on the interior where Mark Donnal, Moritz Wagner and two freshmen will need to build off of last year.

It’s hard to know what to make of Mark Donnal. John Beilein didn’t rush to his defense when asked if he should be classified as a redshirt junior or a senior — instead noting that all players on the roster are listed without their redshirt designations. He also didn’t really seize the opportunity to praise the 6-foot-9 senior at his season-opening media day press conference. Opting instead to focus on his conditioning.

“He’s a senior right now, and he’s playing in his fourth year, but he does have that extra year,” Beilein said. “We’re going to stop putting the redshirts next to the name, you know, you guys can figure that out. He’s in his senior year, and he’s been practicing okay.

“He’s got to get himself in great shape right now, but we’ve all seen what he can do. We need about 35 games like that at least from him this year.”

Last year, he averaged 7.8 points and 3.7 rebounds in 19.4 minutes per game. On their own, those numbers aren’t bad — especially from a position where Michigan doesn’t demand much offensively. Donnal shot 62.5% on twos in Big Ten play — fourth best in the league — and shoots 33% from three-point range for his career.

He’s shown the ceiling: 25 points, 5 rebound and 5 blocks at Maryland; 26 points, 9 rebounds and 3 blocks at Illinois; 16 points, 8 rebounds vs. Penn State. Those kind of performances prove that the potential is there. On the contrary, there were far too many nights where Donnal was pushed around physically or never settled into a game.

Donnal was the 4th-most productive roll man in the Big Ten, per Synergy, scoring 58 points last year. It seems like a simple skill, but those sorts of baskets are invaluable to the Michigan offense.

The raw potential is there. The instincts and basketball IQ are there. But Wagner was nowhere to be seen from December through February despite a Michigan rotation that lacked much of any punch in the middle.

Whether it was his attitude, a freshman wall, inconsistent play, foul trouble or anything else in between, it’s hard to figure out what to make of Wagner after he showed some of the most promising big man play of the season, but couldn’t get off the bench in conference play.

His strong finish to the season and positive feedback from the coaching staff throughout the offseason and preseason is an encouraging sign that he’s ready to take the next step.

“Moe Wagner is another one that we just need him to play above his years,” Beilein said last week. “He did at the beginning of the year then in the middle of the year ran into a bit of a freshman wall and then down the stretch, tough breaks against him in the Notre Dame game with foul trouble.”

As a freshman, Wagner showed a great feel for the game around the basket, using his body and coordination to casually finish around the hoop and even putting the ball on the deck from time to time. He also struggled with foul trouble (7.3 fouls called per 40 minutes) and giving the ball away (20.5% turnover rate) throughout the year.

Those are both correctable problems. An extra month of strength training this summer has him up to 240 pounds (15 pounds up from his listed 225 as a freshman) and he added 6.5 inches to his vertical leap.

If there’s one player that could really elevate the ceiling of this team, I think it’s Wagner. He has playmaking ability at the five spot that is unmatched and could make an impressive sophomore leap. On the other hand, we’re talking about a big man that only reached double-figures in one game last season and still has a long way to grow.

One of Michigan’s two freshman bigs will play, the other is likely to redshirt. The argument for Teske to play is that his height and length could give Michigan a legitimate shot blocking threat around the basket.

Teske is listed at 7-feet, 245 pounds with a similar wingspan. Conventional wisdom would have been that the 7-footer needed a redshirt year due to his slender figure, but he’s actually listed at 245 pounds — making him the heaviest player on the roster.

From watching Teske on film, he’s a better athlete horizontally than vertically, but he can make up for some of that lack of explosion with his sheer length. Taking much from his high school film, like many 7-footers, can be tough because there’s a limited sample size of big men to defend him. Perhaps the weakest element of his game has been his aggression on the glass, where he needs to do a better job of high pointing the ball.

Dubbed ‘Big Country’ by teammates, coaches and fans, Davis is an old school big man who plays around the basket. He put up gaudy numbers at Onsted throughout his career, but rarely faced defenders of a similar size or a stature.

The biggest adjustment for Davis will be his ability to adjust to the speed of the game at the college level. He has the body to be physical down low, but can he stay in front of college players as a freshman? Can he keep up with the speed of the game in general?Those are questions for both freshmen big men, but they seem to pertain even more-so to Davis.

There are 40 minutes and one redshirt to split between this group of four big men, with DJ Wilson having the capability to slide over to the five spot as well.

I’d expect Mark Donnal to check in around 17-20 minutes per game, close to the same range that he played last year. I’d project Moritz Wagner, who averaged 8.6 minutes per game in 2015-16, to check in right around 20 as well. Wagner and Donnal should shoulder the majority of the load at the five position while Teske or Davis probably plays single-digit minutes as the emergency big man.

While their career numbers through two seasons probably aren’t much different — over the last two years, Donnal’s per-40 averages were 15 points and 8 rebounds. Morgan’s checked in at 13 points and 10 rebounds per 40 over his four year career — there was a level of consistency that Jordan Morgan displayed on a game-by-game basis on both ends of the floor that Mark Donnal just hasn’t been able to grasp.

That consistency is the key to his development, especially on the defensive end, and if he can’t grasp it then Moritz Wagner is waiting in the wings. Wagner would never be described as consistent, but his freshman year made it very clear that his ceiling far exceeds Donnal’s.

Both big men will play, but they also have a lot to prove if Michigan is going to improve from being one of the worst interior defensive teams in the country.