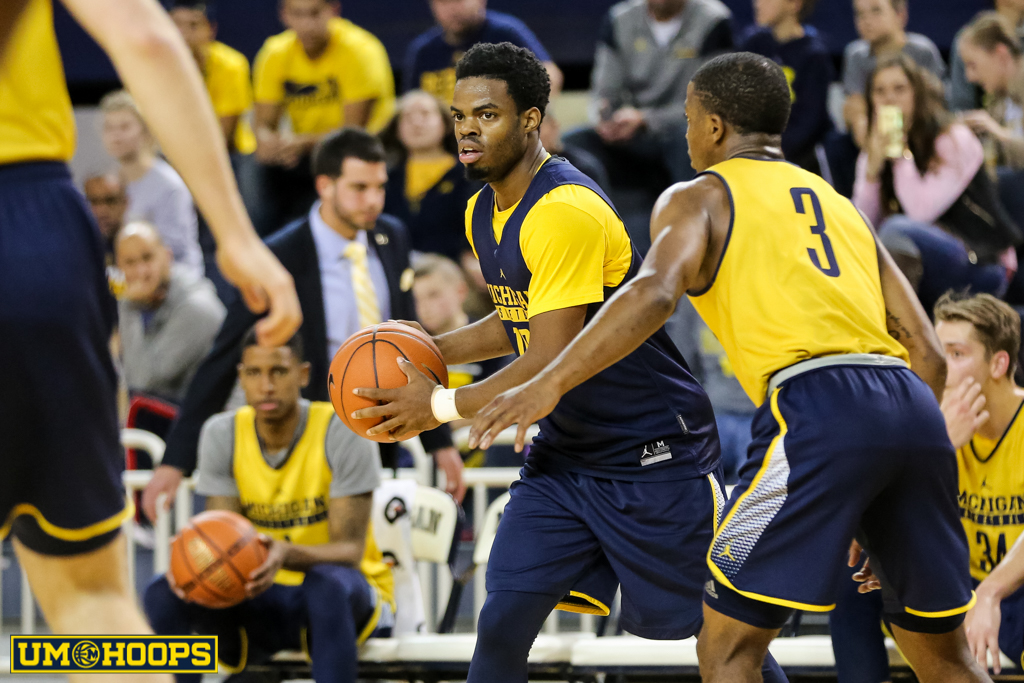 Michigan opened up the Crisler Center for fans Tuesday night with a one-hour open practice free to the public.

Here are some video highlights and three observations from the session — with the caveats that the season hasn’t started yet, the team isn’t going to show too much in this setting, and readers shouldn’t take away too much from one practice.

Michigan opened up the Crisler Center for fans Tuesday night with a one-hour open practice free to the public.

Here are some video highlights and three observations from the session — with the caveats that the season hasn’t started yet, the team isn’t going to show too much in this setting, and readers shouldn’t take away too much from one practice.

Moe Wagner finished last season on a high note, earning more playing time as Michigan entered postseason play. The sophomore forward entered the offseason with considerable hype following him after his play in March, and Wagner spent a lot of his summer in Ann Arbor working with trainer Jon Sanderson to put on weight.

But after Tuesday’s open practice, it appears Wagner’s improvements haven’t only come in the weight room. He displayed a nice shot in drills, knocking down two 3-pointer’s in a 3-on-2 drill the Wolverines ran early on in the session. Later, he knocked down two more threes in the scrimmage portion of practice.

Wagner took 12 shots from behind the arc all of last season — with most coming during the early part of Michigan’s schedule — and made just two of them. Adding a consistent jumper to his arsenal should only diversify his offensive game and help him earn a more consistent role on the court.

Xavier Simpson is another Michigan player that has gotten a lot of hype over the offseason. The freshman point guard was named Ohio’s Mr. Basketball following his final year at Lima Senior high school, was the highest-ranked recruit in Michigan’s 2016 class and has garnered praise from his coaches. Head coach John Beilein has said recently that Simpson will be featured in two-guard sets with senior point guard Derrick Walton, in addition to serving as the backup point guard, and likened the freshman to a running back with the way he maneuvers around the court.

That was apparent when the team scrimmaged. Simpson is small, perhaps even shorter than his listed height of 6’0, but he’s well built and very quick on the court. On several occasions, he was able to get to the spot where he wanted, blowing past defenders. He had several strong takes to the basket, including one where he may have gotten away with an offensive foul, using his left arm to block off the defender when they met at the rim. On the other hand, he missed several jump shots, so that could be something to watch for — Simpson wasn’t known as a lights-out shooter coming out of high school.

Someone who is known for their shooting prowess, though, is Duncan Robinson. The senior wing competed against Michigan women’s basketball player Katelynn Flaherty in a 3-point shootout, and both put on a show for the spectators at the Crisler Center. Flaherty went first, knocking down an impressive 21 of 25 shots, before Robinson took his turn.

He missed three shots from the first corner, leaving him in a bad spot, before missing a fourth later. Needing to make his final ten shots just to tie Flaherty, Robinson made the first nine to the delight of his teammates and the crowd.

But on the tenth and final shot, with his entire team already on the court ready to mob him if he made it, the ball rimmed out of the hoop, and Flaherty took home bragging rights. When Robinson struggled last year, the problem wasn’t his shot — Beilein has talked about the wing’s struggles with finding his shot and moving off the ball once teams started keying on him — and that doesn’t appear to have changed at all.