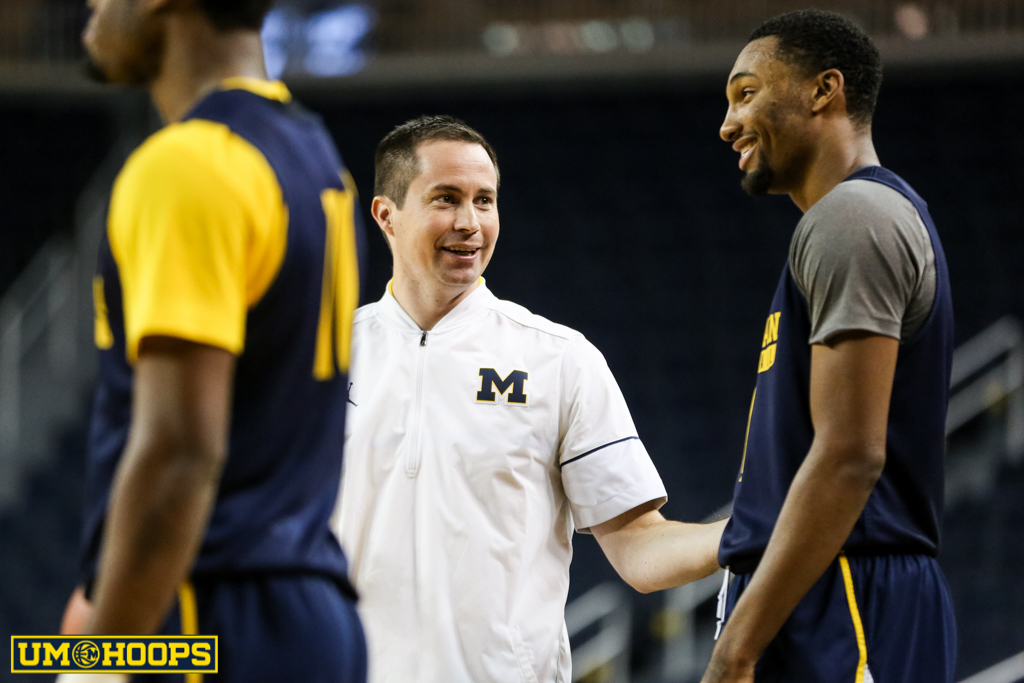 Michigan will play its first public exhibition on Friday evening and the regular season is around the corner. Here’s a look at some of the biggest questions that could have significant impact on the 2016-17 season.

Michigan will play its first public exhibition on Friday evening and the regular season is around the corner. Here’s a look at some of the biggest questions that could have significant impact on the 2016-17 season.

How well does Zak Irvin shoot from long distance?

Two of our favorite college hoops writers, Luke Winn and Dan Hanner, published a Big Ten preview with Michigan finishing fourth in the league. The crux of their argument?

Our projections expect Zak Irvin to positively regress to the mean; he was sidelined for multiple months with a back injury in the summer and fall of 2015, and it dragged down his junior-year efficiency.

Irvin is a career 35.5% three-point shooter, but it has always felt like he’s far worse or far better than that number. As a freshman, he made 42.5% of his threes off the bench, then saw those numbers creep down as a sophomore on an injury-ridden roster. For every 3-of-7 or 4-of-6, it seemed like there was a 1-of-6 or 2-of-9 performance waiting in the wings.

As a junior, he entered the season hurt and struggled out of the gate. Irvin made just 16-of-76 threes in non-conference play, but did hit 37.6% of his triples in Big Ten games. He checked in at just 30% for the season, but it seems reasonable that he could hit 37, 38 percent in his senior year.

If he can do that, Michigan’s offense will be in a great spot in 2016-17 and the proof is in the pudding. When Irvin plays well, Michigan usually wins. When he struggles, the Wolverines lose.

Can Michigan get quality wing minutes off the bench?

Most are confident that Xavier Simpson should provide an immediate upgrade of quality depth for Michigan at the one and two positions, but the three and four aren’t so certain.

Zak Irvin is a known commodity, although he probably has the ability to slide to the two, as is Duncan Robinson. What Michigan is going to get out of DJ Wilson and Ibi Watson is anyone’s guess.

It’s as easy to list the reasons why Wilson should be able to help this Michigan team at the four — length, athleticism, a seemingly capable jump shot — as it is to point out just how little he’s contributed since he arrived in Ann Arbor. He’s drawn positive offseason reviews from John Beilein once again this fall, but we heard similar things last year

Watson showed a bit of what fans can expect from him in Michigan’s open practice last week. He’s a shooter first and foremost, but should have the athleticism to compete on both ends. There’s always a role for a shooter off the bench in John Beilein’s offense, so I’d expect Watson to get a chance.

But at the end of the day, can either of them give Michigan quality minutes? The baseline is replacing Aubrey Dawkins and Kam Chatman, but that’s a fairly low standard. Both players had their moments, and Dawkins was an elite shooter to his credit, but neither was a complete player that Michigan could count on.

How much will Michigan’s defense improve under Billy Donlon?

Michigan’s defense checked in at 95th nationally last season per KenPom, and surrendered 1.08 points per possession in Big Ten play. The 99.4 (schedule adjusted) points that Michigan allowed per 100 possessions were the worst of the Beilein era.

You can’t win many more games than Michigan did last year playing that sort of defense. Enter: Billy Donlon.

There’s no sugarcoating why John Beilein hired a Donlon fresh off of a six-year stint as head coach at Wright State. He was serious about improving the defense and knew that he had to do something. Since the preseason started we’ve heard terms like ‘defensive coordinator’ and ‘500 percent more time on defense’ thrown around. We’ve heard that Beilein has let Donlon speak in practice more than any of his former assistants, even running a practice.

But now the question is what is all of the emphasis going to bring? Personnel wise, the Wolverines still don’t have a roster that has the makings of a shut down defense. There are defensive liabilities on the wings and in the interior, along with a few potential plus-defenders in the backcourt.

KenPom’s projections have Michigan’s defense making a leap to 51st nationally in adjusted defensive efficiency, a leap that would make this team one of the best defensive teams under Beilein. I don’t think that sort of leap is likely, but even modest improvement could help the 2016-17 Wolverines take a forward step.

Will Derrick Walton improve his finishing around the basket?

Walton’s inability to finish around the basket has been a common discussion point over the last two years. The 6-foot-1 senior shot 45% on twos as a freshman, 32% on twos as a sophomore and 36% on twos as a junior. He also saw his free throw rate (FTA/FGA) decrease from 45 to 36% last season.

It’s hard to define exactly why Walton struggles to score inside the arc. He’s a good jumpshooter from long distance, but struggles in the mid-rang. He’s a great athlete that can sky for rebounds, but can’t hit shots in the paint around the same big men that he can out rebound. Is it a mental issue or some remnant from Walton’s foot injuries?

It’s tough to say, but Walton could be one of the conference’s best guards if he can figure out a fix.

Can Moritz Wagner stay out of foul trouble — and on the floor?

If you are looking for something to hang your hat on as to why this Michigan team will be better than last year’s Michigan team, look no further than Moritz Wagner.

Wagner showed flashes of potential as a freshman, but always seemed to get in the way of himself. He struggled to stay out of foul trouble — whistled for 7.3 fouls per 40 minutes — and eventually fell out of the rotation due to his inconsistent decision making on both ends of the floor.

But anyone that watched Michigan when Wagner was playing, and playing well, can understand the lift that he could provide this roster. Whether it’s his energy, feel around the basket and even occasional outside jumper, Wagner has a skillset that is perfect for the Michigan offense. The key for Wagner is to figure out a way to pull all of those skills together on a nightly basis and become an impact player.