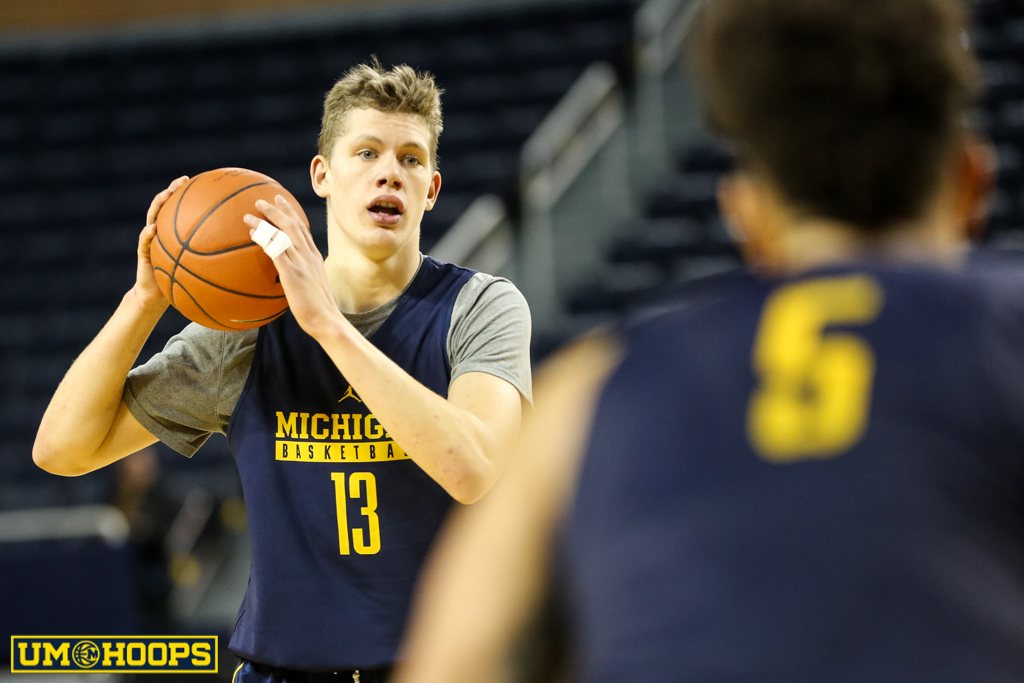 Michigan will take the court tomorrow against another team, in front of fans, for the first time in 33 weeks. The Wolverines will face the Armstrong State Pirates, who are making the trip from Savannah, Georgia, in an exhibition game at Crisler Center (7:00 p.m. ET; BTN Plus).

Michigan will take the court tomorrow against another team, in front of fans, for the first time in 33 weeks. The Wolverines will face the Armstrong State Pirates, who are making the trip from Savannah, Georgia, in an exhibition game at Crisler Center (7:00 p.m. ET; BTN Plus).

John Beilein, more so than in past years, thinks Michigan needs to be playing at a high level in November. Two tough opponents in New York, plus South Carolina and Virginia Tech, appear on the schedule this month. It doesn’t get any easier after that. Beilein feels the schedule is the “most challenging” the program has had since he arrived in Ann Arbor.

It’s been a topic throughout the offseason, and we’ll get our first glimpse at the allocation of minutes in the frontcourt. Beilein said both Moritz Wagner and Mark Donnal have had some really good days in practice. Wagner has more skill and is a better shooter and that’s why he has a slight edge right now over Donnal, the superior defender and rebounder. “As far as who is going to play most, it will depend on what we need most in that (particular) game.”

As for the freshmen, Beilein praised Jon Teske’s basketball acumen. He’s been picking up things quickly in practice and has a high skill level for a 7-footer. Austin Davis is the best rebounder on the team, according to the coach. “If he can get near a ball, it’s his.” The game is still moving too quickly for both youngsters, which is to be expected for 80 percent of freshmen.

Ideally, Beilein would prefer a player with Wagner’s offensive skill and Davis’ rebounding prowess. Time will tell if he can mold someone on this roster into that perfect combination.

It should also be noted that freshmen, unlike other players, can appear in an exhibition game without it affecting their redshirt status.

Beilein wants to see his team run tomorrow to get easy baskets and not just jog down the court looking for an early three.

“If you’ve watched our team over the years, it was a bust-out program where if Nik (Stauskas) or Caris (LeVert) got a rebound, the point guards needed to fill a lane. But guys play all summer and it doesn’t happen—Derrick (Walton) and X (Xavier Simpson) look for the ball and you’ve lost a lane. We don’t want to outlet if a skill player gets the rebound. Getting those guys to run a lane has been difficult. But you can’t win playing just half-court offense.”

Last season, of the 351 Division I programs, only 49 played at a slower pace than Michigan (as measured by KenPom’s adjusted metrics). Their average offensive possession length was longer than all but 43 teams. So this would definitely be a shift in gears. But if athletic players like Muhammad-Ali Abdur-Rahkman and D.J. Wilson can run the floor at top speed, Michigan can be dangerous and fun to watch.

Defensively, look for Michigan to create more turnovers this season.

“We don’t want guys being sloppy and going for steals they can’t get. At the same time, we have to dictate a little more what the other offense does by slowly sliding into their comfort areas.”

Michigan will be more aggressive defensively, mostly thanks to the addition of assistant coach Billy Donlon, and won’t mind fouling more if it means giving up fewer easy baskets. This would be the biggest philosophical change of all. Only eight teams in the country had a lower foul rate than Michigan last year, which is typical for Beilein’s teams.

Beilein was asked a lot about redshirt sophomore DJ Wilson and he had no problem talking about his versatile forward. After missing most of his freshman year because of injury and not quite meeting expectations last season, Wilson is primed for a breakout year.

The 6-foot-10 Wilson, who “didn’t get a rebound ever in practice when he came here,” according to Beilein, is now snagging boards in traffic.

“Don’t confuse him with Dennis Rodman, but he’ll stick his nose in there like you haven’t seen before. If we can rebound and defend out of that four position, it will be huge for us. At this point, we think he’ll play significant minutes in every game.”

The difference for Wilson heading into this season is that he’s gotten stronger and figured out how to use his body better.

“Then I had to change my mindset and become a little more aggressive,” Wilson said this afternoon. Donlon is aggressive and loud in practice, and the players feed off his energy. “I realized the team needs [aggressive rebounding],” Wilson said. “We’re lacking in that area so I need to step up and I believe I have.”