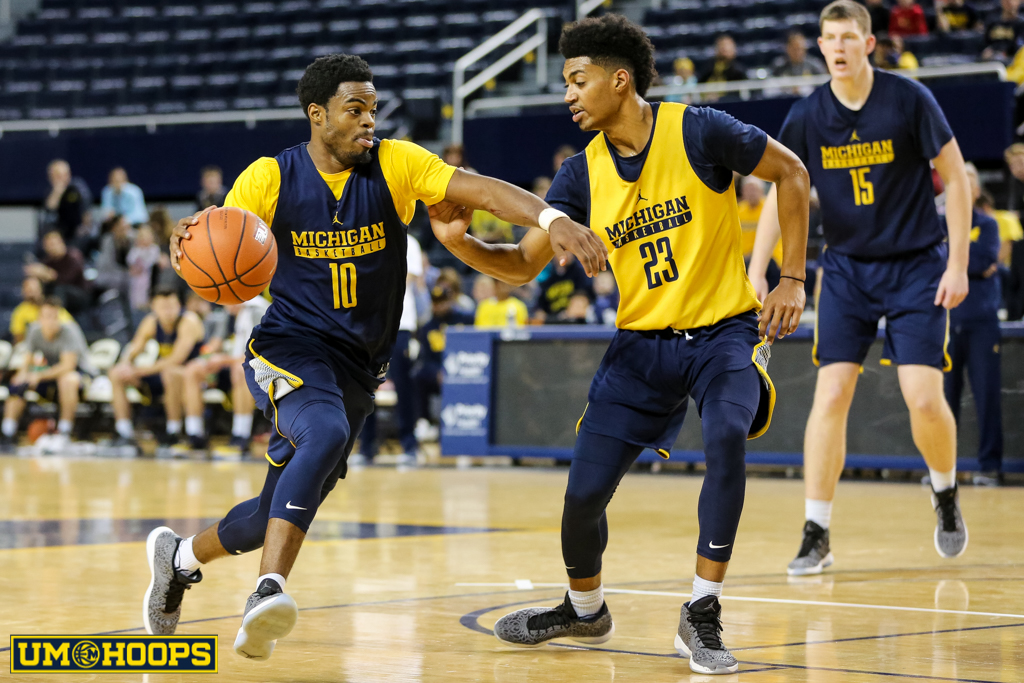 Basketball is finally here, even if only in exhibition form. Michigan will take the floor against the Armstrong State Pirates, who are making the trip up to Ann Arbor from Savannah, GA.

Basketball is finally here, even if only in exhibition form. Michigan will take the floor against the Armstrong State Pirates (7 p.m. ET, BTN Plus), who are making the trip up to Ann Arbor from Savannah, GA.

The Pirates went 12-15 last season and were picked to finish 12th in the 14-team Peach Belt Conference this season. For those wondering why Armstrong State would travel north for an exhibition, look no further than Pirate assistant coach Cazzie Russell returning to “The House that Cazzie Built”. 50 years removed from his playing days in Ann Arbor, Russell is in his third season at Armstrong State.

Here are five things to watch for tonight in Michigan’s first and only exhibition contest.

You’ve seen all of the talk throughout the summer and over the last few weeks. The addition of Billy Donlon as a ‘pseudo defensive coordinator’, ‘500% more time spent on defense’, “imposing their will on defense”, faster tempo, more aggressive, less foul-averse. At times it has sounded like Beilein or his coaches and players are describing a different team.

Every Division I coach in America says that they are going to play faster in the upcoming season, and they all want to get better defensively as well, but this will be our first chance to see if anything actually looks different. Any differences will be met with the (reasonable) criticism that it is only a preseason exhibition game, but we’ll have something to go off of beyond secret scrimmage whispers and a couple of hours of open practice.

I’ll be looking for some of the little things: Does Michigan change how it defends pick and rolls? Do the Wolverines do a better job of containing dribble penetration? How do the bigs hold up on the inside? We won’t get all of the answers against an Armstrong State team that only has a handful of players 6-foot-7 or taller, but we’ll at least get our first data point.

One of the many x-factors on this team is DJ Wilson. Last year Wilson was one of a number of guys that could be an x-factor on the wing, but now Kam Chatman and Aubrey Dawkins are gone and Wilson is really the only backup four on Michigan’s roster.

Everyone is saying the right things about Wilson’s progression, but it will be eye-opening to see it for the first time. Is he rebounding and finishing in the paint or is he a high volume mid-range jump shooter who prefers to float on the perimeter?

Wilson never really looked comfortable on the floor last season, so just pay close attention to how he fits and how his role develops. John Beilein described a ‘Troy Williams’ type of role for Wilson, but I think most would settle for even a Glenn Robinson III type of niche.

I’ll be counting the number of cuts and finishes at the rim that we see from Wilson — an element of Michigan’s offense that has been absent since Robinson declared for the NBA Draft.

The guards both should have integral roles in the rotation with Simpson serving as the backup point guard and Watson as the primary shooting option off the bench, while the big men battle it out for the No. 3 center spot.

There’s more excitement surrounding what type of impact Simpson and Watson can make, but the more pressing matter is to figure out the big man puzzle.

It sounds like Teske has the edge right now with his sheer size and shot blocking ability, while Beilein also lauded Davis as the best rebounder on the team. Speculation is that one of the freshmen big men will redshirt and if that’s the case then this will be our one chance to see both on the court.

Will Moritz Wagner or Mark Donnal be Michigan’s starting center? It sounds like Wagner might have the upper hand in the race for the spot right now, but both Wagner and Donnal have plenty to prove.

Beilein assessed that Wagner is the better offensive player and Donnal is the better defender and rebounder, but added the Wagner appears to have the advantage  right now.

That news is at least somewhat encouraging because the fleeting moments where Wagner shined last season were some of Michigan’s best. If he’s consistent enough to start, after sitting on the bench for much of conference play last year behind Donnal and Ricky Doyle, it means he might have taken a big step in his development.

It seems like a safe bet that Michigan will start the game with Derrick Walton, Muhammad-Ali Abdur-Rahkman, Zak Irvin, Duncan Robinson and Moritz Wagner, but how will John Beilein use his bench?

This will be our first chance to see what combinations Beilein thinks could work. He’s discussed a two point guard look with Simpson and Walton on the floor at the same time, but what combinations of wings does he prefer? Who seems to be playing ‘the four’ compared to the ‘the three’ despite their offensive similarities. Does Irvin factor in at the off guard or does Abdur-Rahkman ever slide to the wing?

How do I watch?

Tonight’s game is on BTN Plus — a streaming service from the Big Ten Network — and you’ll need to subscribe in order to watch. BTN-Plus subscriptions cost $9.95 per month for a Michigan-only package and $14.95 per month for a conference wide option.

In addition to tonight’s exhibition, Michigan’s game against Howard (Nov. 11th) and potentially its game against Kennesaw State (Dec. 3rd) will be on BTN Plus. That means that a one month subscription should just be enough to cover you.

Of course, you can also head to the Crisler Center and check out the action in person or follow along here in our open thread. The game will also be re-aired on Big Ten Network at 6 p.m. on Sunday.