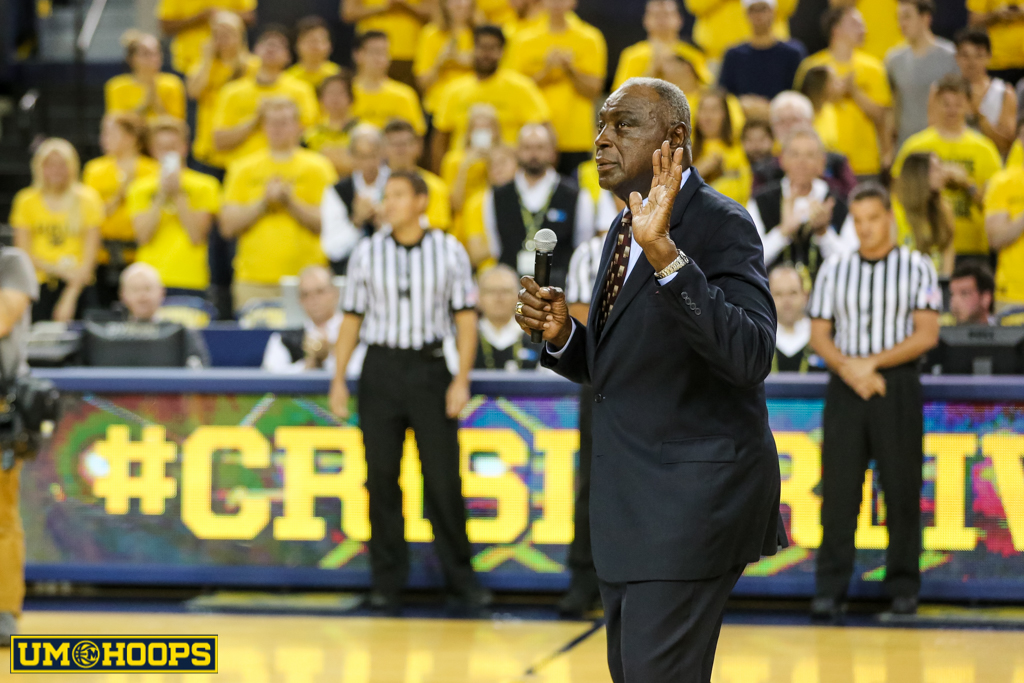 Cazzie Russell, the greatest player in Michigan history, returned to Crisler as an assistant coach with Armstrong State.

Cazzie Russell returned to the house he built yesterday, as an assistant coach for Armstrong State. It’s a wonder he recognized it. Crisler Center is celebrating its 50th anniversary, but the arena underwent major renovations in 2013. There’s now a separate practice facility, a state-of-the-art locker room, and wide, bright concourses. In short, the only similarity with Yost Fieldhouse, where Russell and his teammates played from 1963 to 1966, is that the rims are 10-feet high.

“You’ve got to be kidding me,” Russell said yesterday when asked to compare his home court—Yost Fieldhouse, now Yost Ice Arena—with the current facilities. “When I came here, I could walk out of Yost Fieldhouse right to the railroad tracks. There wasn’t anything in there. It’s like a city in there now.”

He’s referring to the baseball and softball complexes, football practice fields, and other buildings. “I’m blessed to have come here in 1962 and to be alive in 2016 to see this. I truly enjoyed playing. I didn’t realize at time that it would string forward like this.”

Russell is the greatest player in Michigan basketball history. Like all freshmen at the time, he sat out his first year in Ann Arbor. The program had won just one Big Ten title in the previous 34 years, but accomplished the feat in all three of Russell’s seasons. Oh, and the Wolverines went to the Final Four twice (1964 and 1965) and came within a game the next year. Until Trey Burke in 2013, Russell was the only Wolverine to be named the National Player of the Year. He was the No. 1 pick in the 1966 NBA draft.

The team’s success drew crowds that outgrew Yost, and ground was broken on Crisler, forever known as “The House That Cazzie Built.” He never got to play there wearing a Michigan jersey, but did as a rookie with the Knicks in a game against the Detroit Pistons.

As a favor to the 72-year-old Russell, who is in his third year as an Armstrong assistant after a 13-year tenure as the head coach at Savannah College of Art and Design, Michigan invited the Pirates to play an exhibition game last night. (Armstrong State made an impressive run to start the second half but lost 77-49.) After the public address announcer introduced him over a highlight video, Russell was given a microphone at midcourt.

“I thank Michigan for taking a chance on me and giving me a chance to play,” he told the fans, almost all of whom were on their feet. “I have a great bond with this university and my teammates…Thank you, Coach Beilein and his staff, for extending an invitation to play this game. It’s meant a lot to these young men and a lot to me as a Michigan man to share this history with them.”

Michigan is fortunate, to say the least, that Russell ended up here. Oscar Robertson visited Russell’s high school and tried to lure him to Cincinnati. He received letters from John Wooden at UCLA. Michigan had gone silent, the result of a misunderstanding that led head coach Dave Strack to believe Russell wasn’t interested. A phone call and a campus tour—in which Strack wisely omitted Yost—mended the relationship. Russell, who is also an associate pastor in Savannah, prayed on his decision. He said last night, “The Lord directed me to Michigan. It’s changed my whole life to have come here.”

To come back, as part of the opposition, put Russell in “uncharted waters.” The experience—particularly the looks on his players’ faces as they saw his retired number in the rafters and his larger-than-life iconic mural in the concourse—was unforgettable.

“We always hear about the great Cazzie Russell but it was an honor to be here and see the house that he built,” said junior K.J. James, who led all scorers with 16 points. “He’s a very humble guy and doesn’t mention it much, but (head) coach (Evans Davis) talks about him. It was great to be here with him as he came back and to play against his alma mater.”

Said Russell: “Players hear about you and that holds them—but (eventually) you need to show them something that makes them aware you know what you’re talking about.” Friday’s tour of the facilities was that moment, as the Pirates fully grasped Russell’s legacy here. Russell quipped that he hopes the players will listen to him even more now.

When told about that comment, James smiled and said, “Definitely. You’ve got to. Anything he’s got to say, I’m all ears.”