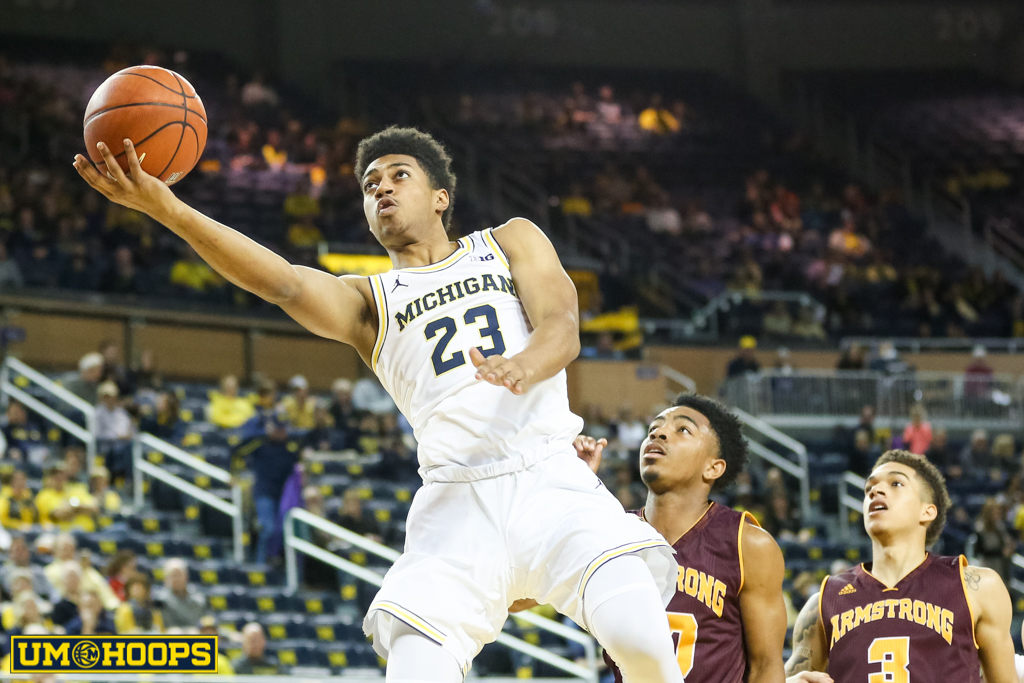 Moritz Wagner attacks off the bounce

I wrote several times this offseason that Moritz Wagner’s improvement could make a significant difference for Michigan because of his high ceiling than big man Mark Donnal. Wagner appears to have taken the offseason seriously and emerged with the starting center spot out of the gate.

“Obviously it’s an accomplishment and I’m happy about it,” Wagner said of earning the starting spot. “But it’s in particular that I worked for. If you work in the summer you don’t say ‘I wanna start, I wanna start’, you say ‘I want to get better to help this team.'”

Wagner played like he intended on keeping his role, scoring a game-high 15 points on 7-of-9 shooting from the floor. What was most impressive is how many ways that Wagner put the ball in the basket.

“You see the way he runs the floor. You saw his skill level a couple of times, too,” John Beilein said. “His development is huge.”

Wagner scored against 2-3 zones, with his back to the basket, off the bounce from the top of the key, via high-low passing with DJ Wilson. He even drove and kicked to the wing.

“The big thing is we think he can take a lot of guys his size off the bounce,” Beilein explained. “That kick to the corner, we didn’t get it, and that was what he’s been working on. He can play through it. You can throw him the ball in the mid-area of the post, too, off a ball screen.”

Perhaps the most concerning aspect of Friday’s exhibition was that Duncan Robinson failed to make a three-point shot. The 6-foot-8 shooter only failed to make a 3-point attempt in three games last season (Northern Michigan, MSU, Purdue) and it sounds like his shooting slump could be indicative of a prolonged drought rather than one off night.

“Right now, he’s not shooting with confidence — beyond tonight,” Beilein said after the game. “He’s just got to go and shoot it. He’s just got to get through this little thing because it’s happened a couple times in the last week. When guys come out of the summer, and I saw this with Patrick all the time, when guys practice like Duncan practices, which is excessively long, you can build bad habits. Too big of a knee bend. Too slow of a release. Bad arch. And then to break that habit is harder than you can imagine.”

Michigan needs Robinson’s shooting stroke, especially with Irvin’s inconsistency from three-point range and the transfer of Aubrey Dawkins, and he compounded his issues on Friday night by picking up several ticky-tack fouls for pushing off on rebounding opportunities.

As Robinson struggled with foul trouble, DJ Wilson had an opportunity. He played 24 minutes, more than any other reserve and more than Robinson’s 17, and flirted with a double-double on 10 points, nine rebounds and two blocks.

Wilson still had a few rough patches, but overall I thought he showed a more well-rounded and improved game. The 6-foot-10 forward only grabbed 18 rebounds all of last season, so a nine rebound night is a step in the right direction regardless of competition level. He also scored in different facets off the game including with his back to the basket, on the offensive glass, from three-point range and with a turnaround jumper in the paint.

“He just has never played minutes like that. Usually he would get in there for four to five minutes, make a good play and have some things that he needs more development in,” Beilein said. “So today it was just, ‘Go out there.’ … He’s got a long ways to go, but I just love how he’s working.”

Freshman wing guard Ibi Watson was the first freshman off the bench on Friday night, and he chipped in 7 points, four assists and three steals in 18 minutes.

Watson scored with an early basket in transition, seconds after he got on the floor, and consistently found ways to be involved when he was on the floor.

“(Beilein) just wants me to come in and play hard, be aggressive,” Watson said of his role. “Just do little things like play defense, rebound and do whatever I can to help the team win.”

Watson seemed to pick up deflections effectively, evident by his three steals, and he showed the ability to stretch the floor as he knocked down a triple. As much promise as there was to Watson’s game, there was also room for improvement. He was just 1-of-4 from long distance and had three turnovers including a couple of ‘high school passes’ that just don’t work at the Division I level.

But the promise was there and it’ll be on Watson to learn to be more efficient and confident over the next several weeks.

Derrick Walton didn’t score a point until there were under 6 minutes to play in the first half of Michigan’s exhibition win. He didn’t make a field goal until the second half began. He also led the team with 7 assists and grabbed six rebounds for good measure.

The question is what kind of point guard is Walton going to be? I still think that he needs to be more aggressive offensively and it’s no coincidence that after Armstrong State made a run early in the second half, Walton looked to step up offensively and knocked down this big pull-up three-pointer.