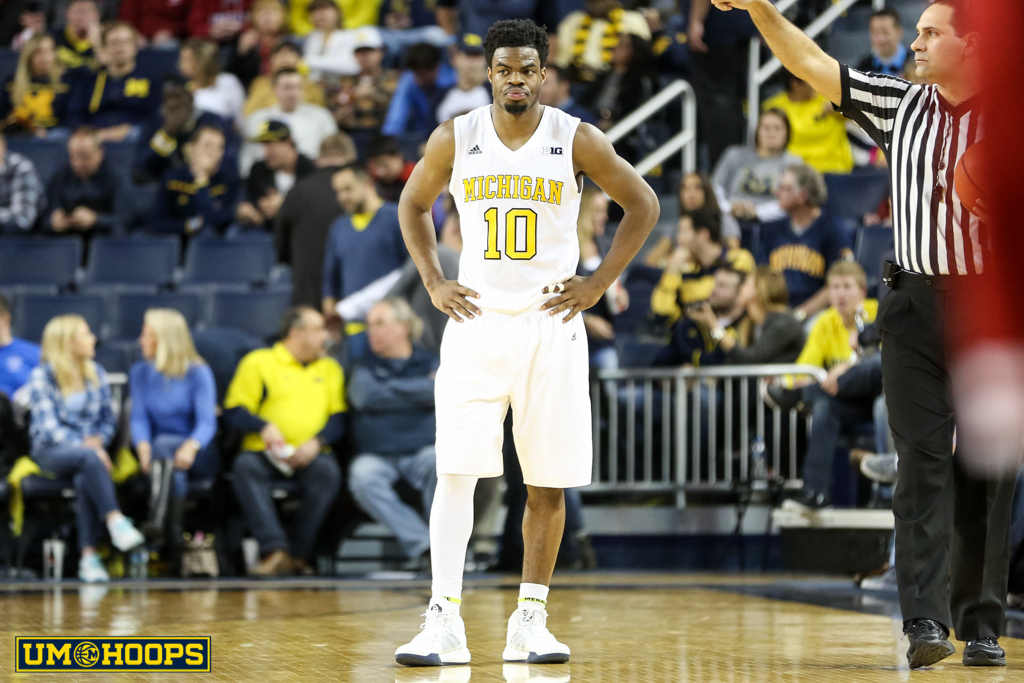 For a preseason look across the Big Ten, we’re publishing a two-part edition of our Big Ten Power Rankings. We already went through what we like about each team in the conference, here’s a look at where we’re concerned.

For a preseason look across the Big Ten, we’re publishing a two-part edition of our Big Ten Power Rankings. We already went through what we like about each team in the conference, here’s a look at where we’re concerned.

Nigel Hayes is earning mentions as the preseason player of the year in the Big Ten, but his efficiency numbers plummeted last season. Last year he shot 40% on twos and 29% on threes, down from 54% on twos and 40% on threes the season before when he was playing next to Frank Kaminsky. Wisconsin’s defense is legit, but I’m just not sure Hayes is efficient enough for his current role. He posted an offensive rating under 100 in all four of Wisconsin’s NCAA Tournament games last season.

Part of the reason why Hayes’ struggles in the efficiency column is that the Badgers run so much isolation offense through him. Hayes executed 212 isolation possessions (including pass outs) at .849 PPP and Koenig executed 189 possessions at .921 PPP, per Synergy. In terms of volume, both players played more out of ISO sets than anyone in the conference, with over 50% more possessions than No. 3 Corey Sanders.

What does Indiana look like without point guard Yogi Ferrell. Ferrell was one of those players who was so good for four years, that it’s hard not to take his role for granted. He scored, pushed the tempo and distributed the ball for an Indiana offense that was lethally efficient. Personally, I’m not surprised that Ferrell was picked up by the Brooklyn Nets this week.

The Hoosiers don’t lack raw talent, but do they have a point guard like Ferrell that can make it all work? James Blackmon Jr. is back and can help in the backcourt, but he’s not a point guard and has to prove that he’s not a defensive liability. Pitt transfer Josh Newkirk seems like he’ll be the starting option. He had 11 assists in two exhibition games and is capable, but he’s certainly not Ferrell.

Michigan State is a team that has about as much uncertainty as ceiling. Miles Bridges and Josh Langford are going to be two of the best freshmen in the Big Ten if not the country, but I have two questions about how this is going to work out.

First, the Spartans have major depth concerns in the frontcourt. Both UNLV transfer Ben Carter and senior big man Gavin Schilling are out for an undetermined time with knee injuries. That leaves freshman Nick Ward, 6-foot-6 Kenny Goins and 6-foot-5 Kyle Ahrens to provide frontcourt depth.

I’m also curious to see who Tom Izzo runs his offense through. Izzo generally likes to run his offense through an upperclassman shooter that he can run off screens and the Spartans lost two elite scorers and shooters in Denzel Valentine and Bryan Forbes. Conventional wisdom is that Eron Harris will fill the void, but the guard who CBS Sports calls a ‘scoring savant’ only reached double figures in just 4 of Michigan State’s final 15 games last season. Harris can shoot the three (41% career) and put up big numbers during his time at West Virginia, but is he someone that a Big Ten Championship contender or top-ten team runs their offense through?

Langford and Bridges are also viable candidates, but the last time a freshman led Michigan State in scoring was redshirt freshman Sean Respert in 1992 (H/T @BFQuinn).

Whenever you hear Caleb Swanigan’s name in a basketball discussion, there are usually two things that follow. The first topic of conversation is always his elite rebounding ability and rightfully so, but the second is generally  ‘why does he shoot so many threes?’ Honestly, I’m not really sure. Swanigan was 21-of-72 from three-point range last season and there is no reason that he should attempt a quarter of his shots from 3-point range as a 6-foot-9, 250 pound sub-30% three-point shooter.

Purdue has plenty of shooters — Vince Edwards, PJ Thompson, Spike Albrecht, Dakota Mathias and Ryan Cline are all capable of flirting with 40% from long distance — and Swanigan needs to focus on his interior offense to complement those abilities.

Can Michigan play any defense? Unless the Wolverines can become a truly elite, top-10 level, offense in 2016-17, then they’ll have to improve defensively to break into the top tier of the conference. New assistant coach, former Wright State head coach, Billy Donlon is expected to help, but he’ll have his work cut out for him. Michigan rated in the bottom third among Division I teams defending spot-ups, isolations, cuts to the basket, and in transition, per Synergy.

The Buckeyes return essentially their entire roster from last season and are a KenPom favorite to make a big leap, ranked 13th nationally in his preseason ratings. If they are going to leap into the top-15 nationally, they’ll need to figure out last year’s offensive problems.

The weak link last year was arguably the most talented player in the rotation, JaQuan Lyle. Lyle used over a quarter of Ohio State’s offensive possessions, but was the only starter with an offensive rating under 100. If he can improve his efficiency (cut down on his 23% turnover rate and make more than 25% of his threes) and improve his maturity (the last thing I remember from his season is him spiking his water bottle on the bench during the Big Ten Tournament) then the Buckeye offense should be in good shape because there are plenty of versatile wing options to surround him.

We already mentioned how much we love Melo Trimble and Maryland’s schedule, but what else does Mark Turgeon have to work with? Robert Carter Jr., Diamond Stone, Rasheed Sulaimon and Jake Layman. I’m not sold on Jared Nickens, Jaylen Brantley and Damonte Dodd filling those any of those roles one-for-one. Promising freshmen like Justin Jackson and Kevin Huerter should help, but in terms of raw talent there’s just so much to replace.

Iowa loses about as much as Maryland in terms of key rotation players, but Fran McCaffery’s program just needs to figure out how to end the season on a high note. The Hawkeyes were 19-6 in 2013-14 before they lost 7 of their final 8 games. They finished stronger in 2015 other than a one-game stint at the Big Ten Tournament, but last season they shot off to a 19-4 (10-1 Big Ten) start only to go 4-7 down the stretch and out of the Big Ten Championship race.

The primary concern for John Groce will be how can the Illini get better on the defensive side of the floor. Opponents posted a 53.6 eFG% against the Illini last season, making 51% of their twos and 38.6% of their threes. Illinois had the worst defense in the Big Ten against isolation drives (including passes) and was ranked just 12th in pick-and-roll defense (including passes).

You know that Penn State is going to play hard under Pat Chambers and the Nittany Lions have some great talent on the wings, but can they shoot the ball well enough to win consistently? Penn State had just a 47.7 eFG% on catch and shoot jumpers last season, per Synergy. They also shot 45% on twos, 32% on threes for a 46.3 eFG% in league games — third worst in the conference.

Minnesota finished last season on a 3-21 stretch with wins over Chicago State, Rutgers and Maryland. The Golden Gophers also managed to lose to finish the regular season with a loss at Rutgers.

It’s probably something that Nebraska fans, players and coaches want to put behind them, but the loss of Andrew White III really stings. White was a high-volume, high-efficiency wing that would have been the focal point of the Husker offense after Shavon Shields’ graduation.