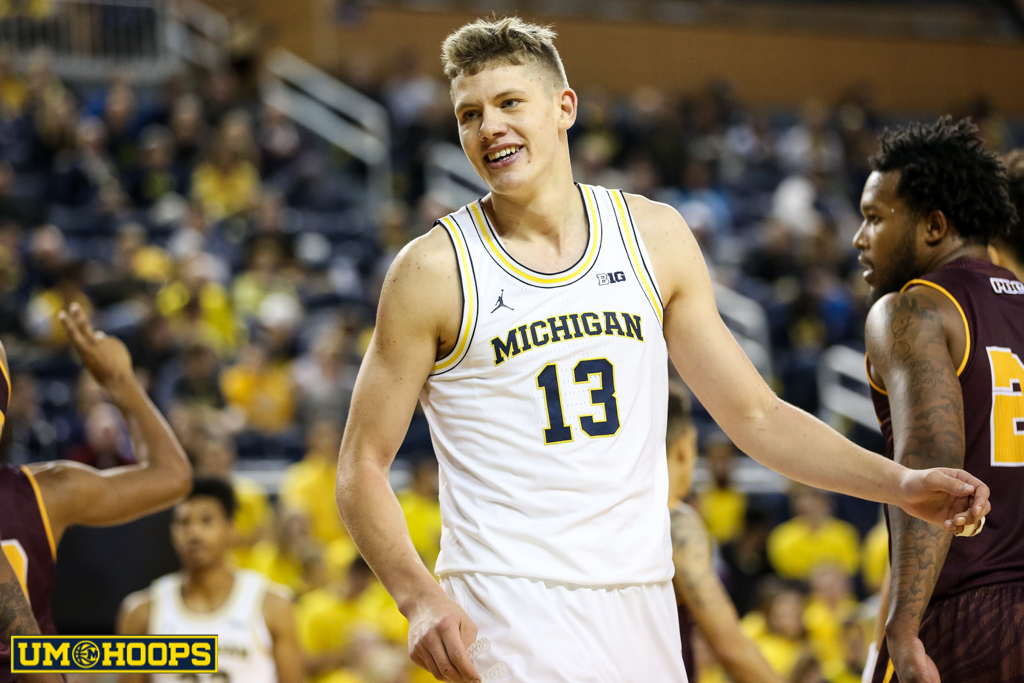 His offensive skills scare opponents, but John Beilein hopes to see improved rebounding from Moe Wagner in this weekend’s two games. Michigan will face a Howard team on Friday that will likely be without its leading scorer, and IUPUI on Sunday.

Michigan hosts two games this weekend as part of the 2K Classic to open the regular season. Regardless of the results, the Wolverines will head to Madison Square Garden next week for the semifinals, but two games in three days certainly has a tournament feel.

Michigan starts the 2016-17 campaign against Howard tomorrow night. Tip-off is scheduled for 9:00 p.m. ET (BTN Plus), but that will depend on the duration of the women’s game, which starts at 6:30.

I spoke with Howard head coach Kevin Nickelberry on Monday. He recognizes Moe Wagner is a match-up problem. “I’ve gotten a lot less sleep since seeing how he played in the exhibition.”

Wagner scored 15 points against Armstrong State, but only grabbed two rebounds in 25 minutes. He’ll have to keep improving his rebounding and defense to stay on the floor.

“From the defensive end, there’s gotta be enough defensive presence to make it worth it to keep him in there on offense,” Beilein said. “That includes staying on the floor and out of foul trouble.”

Beilein said that having quality reserves this season will motivate guys to play on both ends of the court—and ensure they’ll have the stamina to do so. Regarding rebounding specifically, Wagner said he’s working hard on technique.

Howard ranked 74th in the country in offensive rebounding rate last year but the eighth-worst on the defensive glass.

Despite going 12-20 and finishing 10th in the 13-team MEAC last year, Howard was picked to win the league this season. The injury bug has bitten the Bison early this year.

The reigning conference Player of the Year and the country’s leading scorer last season, James Daniel, is expected to miss 4-6 weeks with a high ankle sprain. At least that’s what Nickelberry told me. Daniel is hoping to play in a game he’d circled because of the match-up with Derrick Walton. Daniel’s presumptive back-up, freshman Kai Tease, is out 8-12 weeks with a broken foot, and freshman center Henry Odunze tore his ACL and will miss the entire season.

“You can’t replace Daniel with one person,” Nickelberry said. “We will have to do it by committee.”

The point guard position is a question mark, and Howard will likely play a little slower than it would have had Daniel been available. However, with eight seniors on the roster, Nickelberry said, “We won’t walk on the floor intimidated.”

Muhammad-Ali Abdur-Rahkman should be pumped for the Friday night opener. Not only did he have to sit out the exhibition because of a minor ankle sprain, but he has connections to the opponent.

As a youngster in Washington, DC, he played for an AAU team coached by Howard’s sports information director, and his father, Dawud, is a Howard alum and a one-time assistant there.

Beilein confirmed that Abdur-Rahkman returned to practice with no restrictions and should be full-go for the weekend.

Beilein will monitor practice time in the early season to avoid tired legs. Friday’s game won’t end until after 11 p.m. and Sunday’s, against IUPUI, tips at noon (ESPNU).

IUPUI also plays on Friday (at Eastern Kentucky) and associate head coach Matt Crenshaw said playing Michigan’s complex offense on such a short turnaround will be tough. Defensively, his team’s goal is to limit Michigan to six or fewer made three-pointers. They’re going to run shooters off the line and try to force contested twos. Unprompted, Crenshaw called Wagner a “match-up nightmare.”

Offensively, the Jaguars are led by a trio of transfer guards: Kellon Thomas is a grad transfer from Kent State and the first true point guard IUPUI has had in a few seasons; Darell Combs, who came from Eastern Michigan, led the Jaguars in scoring last year; Ron Patterson — originally a member of Indiana’s 2012 recruiting class — sat out last season after playing 14 minutes per game at Syracuse as a sophomore.