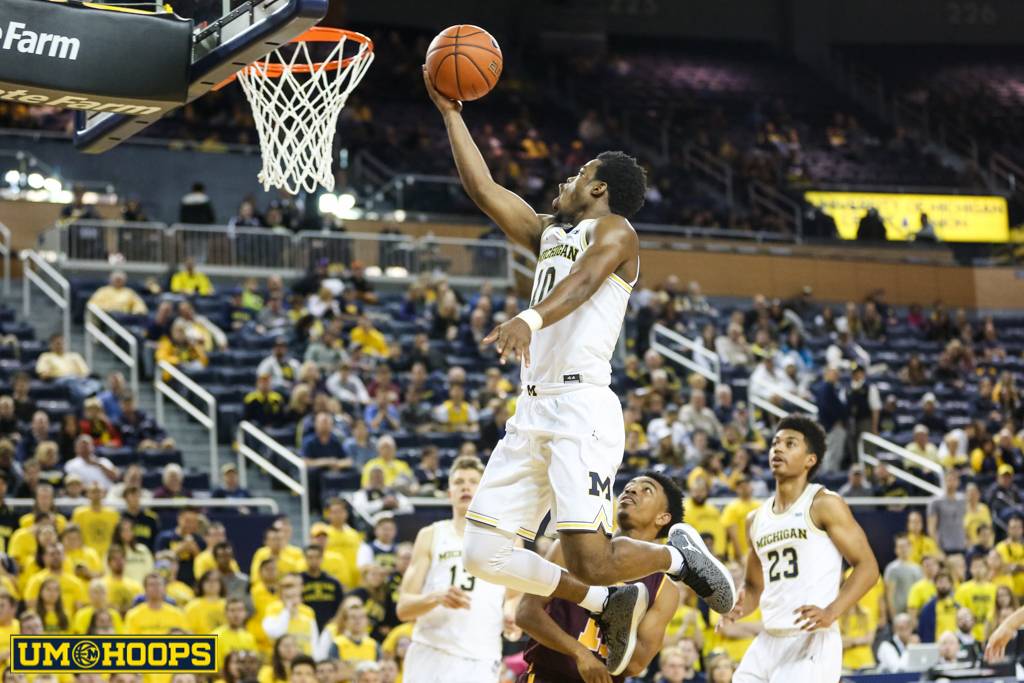 Michigan opens the 2016-17 season tonight, hosting the Howard Bison. The Bison went 12-20 (6-10 MEAC) last season and were knocked out of the first round of the MEAC Tournament. They were also ravaged by injuries last year and return just about everyone from their previous roster.

Michigan opens the 2016-17 season tonight, hosting the Howard Bison. The Bison went 12-20 (6-10 MEAC) last season and were knocked out of the first round of the MEAC Tournament. They were also ravaged by injuries last year and return just about everyone from their previous roster.

With nine seniors on the roster, many preseason prognosticators are projecting the Bison as the best team in the MEAC and a team that could make its first trip to the NCAA Tournament since 1992. This is a team that should be much better than it was a season ago and has plenty of experience and talent to build off of.

Offensively , Howard plays fast and aggressive, averaging 71.5 possessions per game. The No. 1 priority for the Bison on the offensive side of the ball is to try to get to the free throw line — and they do as good of a job of it as anyone in the country. Howard attempted 48.5 free throws per 100 field goal attempts last season, that’s the second best free throw rate in the country.

While they were great at getting to the free throw line, the Bison were one of the worst shooting teams in the country last season. Howard shot just 43.4% on twos (339th) and 29.5% on threes (339th) for a 43.6 eFG% (345th). Only one player on the roster made more than 17 threes last season and only three players on the roster made more than 10. Turnovers were also an issue for the Bison last season, giving the ball away on 20% of their possessions, but they did rebound a very impressive third of their missed shots.

Expect heavy ball screen action from Howard as 27.5% of their offensive possessions end in shots or passes out of ball screen action and another 10.3% result from isolation action. This is a team that’s deadset on attacking off the dribble.

As mentioned, Howard suffered several key injuries last season so it’s fair to assume some of these offensive numbers will bounce back — but this wasn’t a good offensive team last season, scoring an adjusted 92.4 points per 100 possession (331st nationally).

Defensively, Howard was a bit more formidable. The Bison were slightly above average in eFG% defense and did a good job of forcing turnovers. The primary area where the Bison struggled was on the defensive glass, allowing opponents to rebound 35.8% of their missed shots a season ago (343rd).

James Daniel led the nation in scoring last season, an accomplishment buoyed by by one of the most extraordinary usage rates in the country. Daniel used 35.4% of Howard’s offensive possessions and the 5-foot-10 senior shot 42% on twos and 33% on threes. He does draw 8 fouls per 40 minutes (4th best in Division I) and attempts 55 free throws per 100 field goal attempts.

Make no mistake about it, Daniel can play. He’s not efficient, but he will make some incredible shots driving to the basket or from deep range. He’ll play out of the ball screen game quite a bit and can make plays like this.

But Daniel suffered a high ankle sprain two weeks ago with a projected recovery time of 4-6 weeks. That could keep him out of Friday’s game, but he sounds confident that he’ll play, much more confident than his coach.

“I’ll be back for the opener,” Daniel told the Undefeated. “I’ll be ready for Michigan on Friday.”

Freshman Kai Tease, known for his perimeter shooting,  was expected to backup the point guard spot and take on a bigger role if Daniel couldn’t go, but he’s out with a broken foot.

Michigan should also have its hands full down low with 6-foot-11 senior big man Marcel Boyd. Boyd wasn’t a great offensive player last season — he shot 52% on twos and turned the ball over on a quarter of his possessions — but he was a great rebounder on both ends of the floor and a plus-shot blocker. The Bison don’t post up that often, with only 5.9% of their offensive possessions ending from post-ups.

James Miller played in only four games last year, but the 6-foot-4 senior is expected to play a critical role. He provides a bit of the three-point shooting punch that Howard lacked last year, shooting 33% from distance for his career. That being said, he’s still more of an off-the-dribble player with just a third of his shots coming from distance and a free throw rate of 41% in his last full season.

6-foot-5 senior Damon Collins saw increased minutes due to injuries last season and averaged 10 points and five rebounds per game. He’s more of a glue guy and defender with sub-optimal shooting numbers: 39% on twos, 22% on threes for a 38.3 eFG%.

A couple of freshmen could factor into Howard’s rotation as well, although the Bison haven’t played any public exhibitions, including 6-foot-4 guard Nate Garvey and Charles Williams.

Howard has talented players and features a style that should give Michigan a bit of an early test, but health is a major concern. Michigan should win this one fairly comfortably in the end, especially if Daniel misses the game. KenPom projects an 81-60 Wolverine win in a 69 possession game.