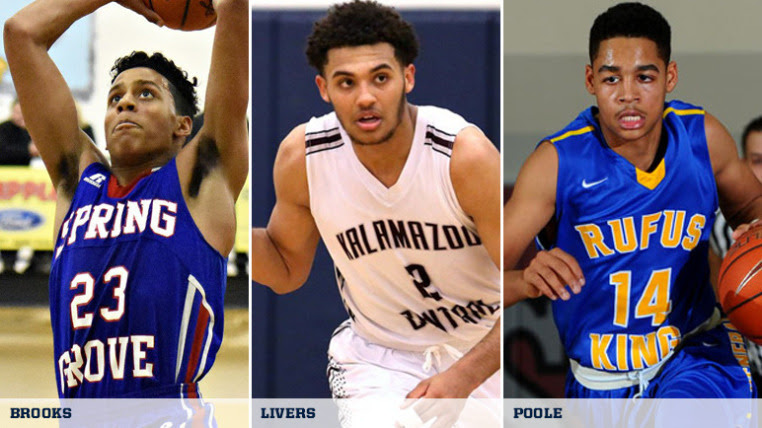 Poole and Brooks signed their letters of intent on Wednesday while Livers signed today. Poole is ranked 90th nationally, Livers 127th and Brooks 189th according to 247Sports’ Composite rankings. Together they make up the No. 3 class in the Big Ten, per 247, trailing Illinois and Wisconsin.

Here’s the Michigan press release on the signings including Beilein’s first comments on his new signees.

“We are pleased to announce three recruits have joined the Michigan basketball program,” said Beilein. “They are a wonderful group of young men who bring versatility, work ethic and that drive to be successful both academically and athletically. We feel they will fit into our Michigan culture and can only go upwards with their potential. They have the capabilities to help us continue our drive to compete and win future Big Ten championships.”

Brooks plays at Spring Grove under coach, and father, James Brooks. Last season, he averaged 24.7 points, 7.6 rebounds and 2.3 assists while knocking down 79 three-pointers. Brooks guided Spring Grove to 25-4 record, the school’s first York-Adams Interscholastic Athletic Association (YAIAA) championship title since 1971, a third-place finish in District 3 playoff and advanced to the school’s first-ever appearance in the PIAA Class AAAA playoff. For his efforts, he was a 2016 All-PIAA Class AAAA second team selection.

“Eli has a great feel for the game,” said Beilein. “He is a coach’s son, so he loves playing and learning about the game. He is a tireless worker in and out of the gym. He plays with a quiet toughness and will be able to play multiple guard positions for us. He can shoot the ball, but his great floor vision allows him to make plays off the ball screen, by scoring or by getting assists.”

“Isaiah has a versatility to his game, which we feel will only help us,” said Beilein. “He can shoot from the perimeter, is very skilled and is improving his rebounding and passing skills. He is agile enough to be a combo forward who can guard or score in the post and on the perimeter. He comes from a great family, and we love his outstanding attitude, passion for the game and love for the University of Michigan.”

After spending three seasons at Milwaukee King High School under legendary coach Jim Gosz, Poole will finish his prep career at La Lumiere School under coach Shane Heirman. While with King, he helped the Kings to a 61-11 three-year record and back-to-back Milwaukee City Basketball championships and WIAA Regional championships in 2014 and 2015. In 2014, King won the WIAA sectional title and advanced to the WIAA Division 1 semifinal. Last season, he averaged 18.2 points per game and was named a to the Wisconsin Basketball Coaches Association (WBCA) Division 1 All-State team as well as an Associated Press All-State honorable mention.

“Jordan is one of those versatile players who could have an immediate impact with our program,” said Beilein. “He is an elite-level passer who finds ways to score while continuing to work on other aspects of his game. He is a confident person on and away from the court. His outgoing personality helps people naturally gravitate to him. Playing at La Lumiere for this final season gives Jordan a chance to play with and against some of the top players in the country. Jordan is a true combo guard who we sense will be a fixture in our backcourt for years to come.”