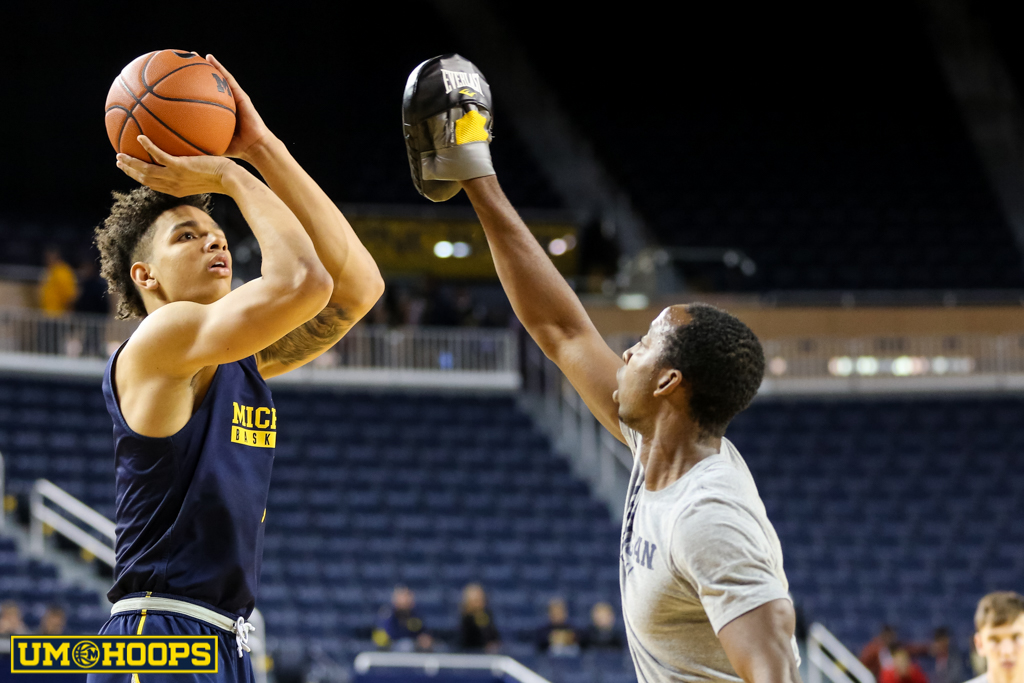 “That’s what we needed last year,” John Beilein said, referring to the first two guys off the bench providing a boost. “They really did a good job.”

It’s the first thing you notice about D.J. Wilson when you see him on a basketball court, so let’s address it immediately: He wears very short shorts.

“I did it a little bit in high school,” Wilson said. “The guys call it ‘Cali swag.’ It’s something I like. It’s comfortable for me.”

With all the hype over the team’s switch to Jordan brand, perhaps this is the apparel adjustment that will have the biggest impact this season. Wilson admitted to feeling more comfortable on the floor in a basketball sense, too, after scoring nine points and grabbing a game-high eight rebounds in 20 minutes off the bench in Michigan’s season-opening 76-58 win over Howard last night.

“The guys call it ‘Cali swag.’ It’s something I like. It’s comfortable for me.”

“That’s what we needed last year,” John Beilein said, referring to the first two guys off the bench providing a boost. “They really did a good job.”

Wilson’s biggest contribution may have been as a passer. He finished with three assists and his ability to float to the middle of the defense, right around the foul line, was key to Michigan probing—if not solving—Howard’s unique match-up zone.

“We worked on that a lot in practice,” Wilson said. “I’m a big target in the middle of that zone and I can pass well out of it.”

His highlight plays came a few minutes into the second half, where he rebounded and dunked a Derrick Walton missed three in one motion and, at the other end of the court, blocked a lay-up attempt above the rim. All of his points and rebounds came in the second half. He finished 3-of-4 from two-point range and made all three of his free throws.

His only misses were his lone three-point attempt and a short jumper. He had two offensive rebound put-backs and caught an alley-oop from Zak Irvin.

In the offseason, Wilson watched film on former Michigan forward Glenn Robinson to see how he operated in the offense. Wilson believes he can use his athleticism in a similar way. Through an exhibition and one real game this year, Wilson said, “I’m letting the easy points come to me and not forcing anything.”

That will be important for Michigan. Wilson shot 33 percent from deep last year and his shooting ability can provide match-up problems and keep defenses honest. But that’s not his strength, and a handful of his teammates are going to be roaming the perimeter hunting threes.

Wilson is growing into his naturally lanky frame. The Sacramento native had bad jumping mechanics when he arrived at Michigan, according to Beilein, but now embraces contact in the paint.

Next week’s games, and of course Big Ten play, may provide a better barometer for Wilson’s improvement. When he doesn’t have a clear height and length advantage over the opponent, can he still be effective?

“You have to know you’re here for a reason and you can produce at this level, Wilson said. “I’m confident. I believe in myself.”