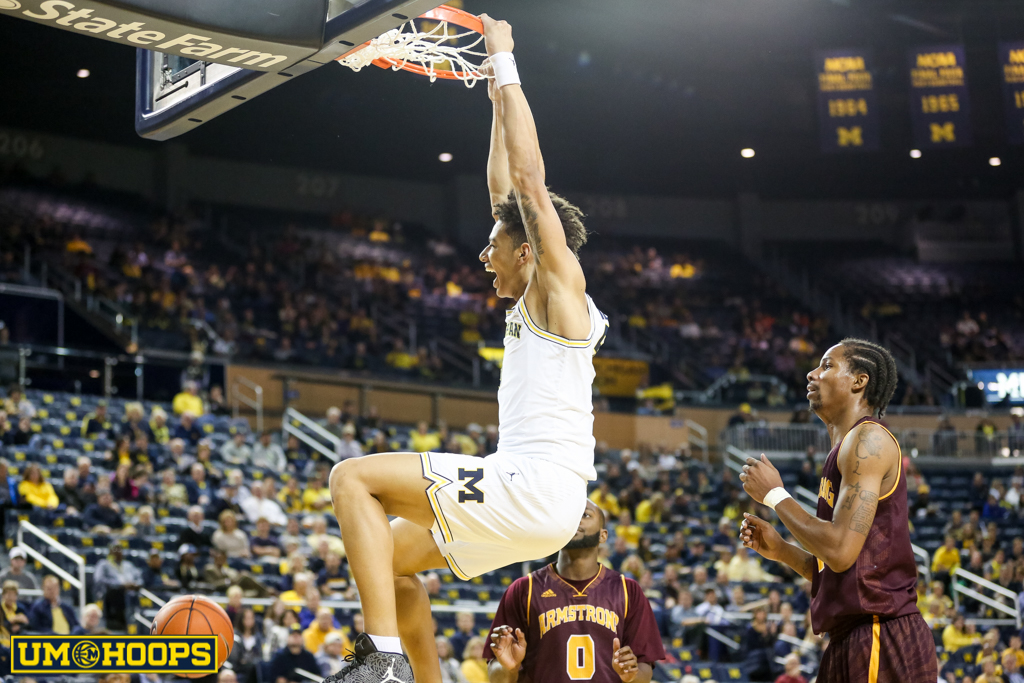 Nothing screams college basketball season opener quite like a game with more personal fouls than made baskets. Michigan came out of the gates slowly, failing to score before the first media timeout, but worked its way past Howard on Friday night for a 76-58 victory.

Nothing screams college basketball season opener quite like a game with more personal fouls than made baskets. Michigan came out of the gates slowly, failing to score before the first media timeout, but worked its way past Howard on Friday night for a 76-58 victory.

The Wolverine offense looked stagnant at times as it attempted to figure out Howard’s match-up zone, and a second half scoring drought allowed the Bison to trim the lead to just five points in the second half, but Michigan was always in control and pulled away with a routine opening night victory on the backs of Derrick Walton and DJ Wilson.

Howard’s inability to hit free throws — 14-of-29 at the stripe — and the absence of leading scorer James Daniel certainly helped the Wolverines, but Michigan hit its freebies (23-of-26) and took care of business in the win.

The Wolverine offense was up-and-down as it tried to figure out Howard’s match-up zone. That’s a tough defense to face in the first game of the season after spending the majority of the preseason preparing to face man-to-man looks, but eventually the Wolverines started to crack it open. Michigan shot just 46% on twos, but did knock in 38% of its three-point attempts and 16 of 22 made field goals were assisted against the Howard zone.

Michigan held Howard to .89 points per possession overall in what I’d call a pretty standard defensive performance. The Bison turned the ball over on a quarter of their offensive possessions including 9 live ball steals (and 4 blocks) by the Wolverines. Those steals and blocks are one of the most noticeable changes in defensive philosophy from a season ago.

Howard attempted 29 free throws to 43 free throw attempts (67% FTA/FGA) and Michigan didn’t allow a free throw rate over 46% last season. I’d hesitate to point to this game as an example of a more aggressive defensive philosophy as much as it was the first game of the season against a team that scored a Division 1-leading 28.7% of its points at the free throw line last season. These foul-heavy game are just a product of the style that Howard plays.

That being said, Michigan needs to do a much better job of avoiding ticky-tack fouls chasing loose balls or pushing off on rebounding attempts. It’s great to hustle for those plays, but too many experienced Wolverines found themselves on the bench with fouls they shouldn’t commit. There’s no reason that four juniors or seniors should pick up two first half fouls.

The rotation is also starting to tighten now that the games count. Michigan started Walton, Abdur-Rahkman, Irvin, Robinson and Wagner and played Wilson, Simpson and Donnal as the core rotation off the bench in the first half. In the second half, that rotation was even tighter and Simpson didn’t play until there was 2:56 left in the game.

Michigan looked far from perfect, but a win is a win early in the season. Now they’ll have to regroup and prepare to face IUPUI on Sunday (the Jaguars lost 97-87 at Eastern Kentucky tonight).