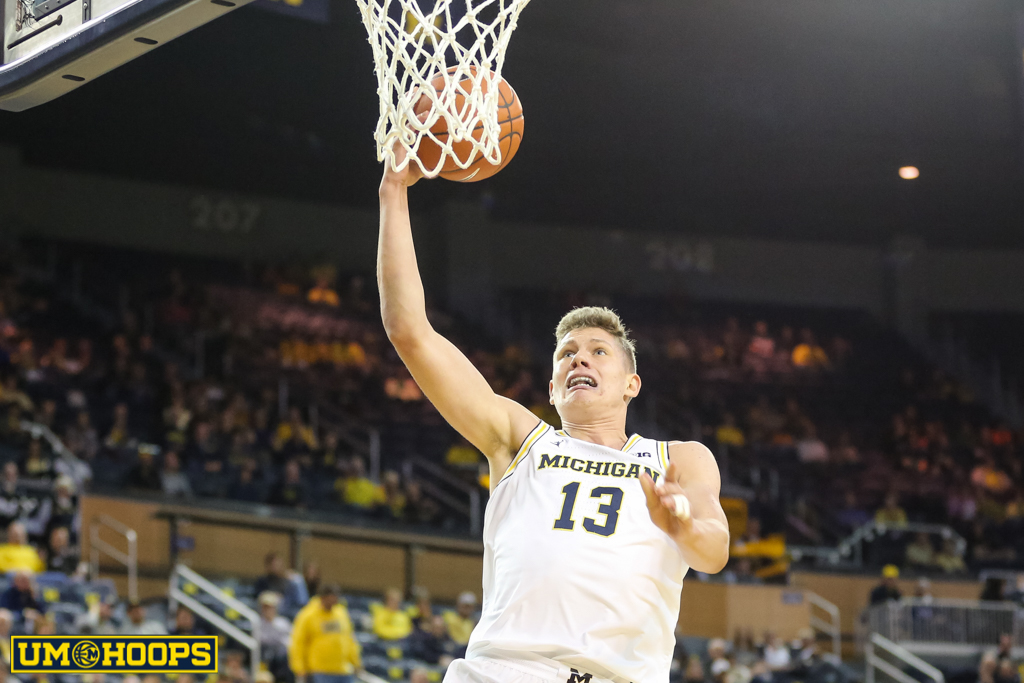 Facing an short turnaround, Michigan will be back in action on Sunday afternoon as it hosts IUPUI at noon (and on TV for the first time this season). The Jaguars also played on Friday night, losing at Eastern Kentucky 97-87 in an 81 possession track meet.

Facing an short turnaround, Michigan will be back in action on Sunday afternoon as it hosts IUPUI at noon (and on TV for the first time this season). The Jaguars also played on Friday night, losing at Eastern Kentucky 97-87 in an 81 possession track meet.

IUPUI was picked in the preseason to finish somewhere in the middle of the Summit League, but does have some intriguing additions to a roster that finished fourth in the conference last season. The Jaguars are currently ranked 207th on KenPom, a good 70 spots ahead of the Howard team that Michigan just beat.

Take Friday’s shoot out at Eastern Kentucky with a bit of a grain of salt because EKU was one of the fastest teams in the country last year, but the Jaguars’ average offensive possession was just 12.8 seconds long in the opener — don’t expect IUPUI to sit on the ball.

The Jaguars were better on the defensive end of the floor last season, ranked 155th nationally in adjusted defensive efficiency and 3rd in the Summit League. Last year’s group was solid on the defensive glass and defended the three well, but lacked much interior punch around the basket. After facing Howard’s match-up zone defense, Michigan will be relieved to face an IUPUI team that played 94% of its defensive possessions in man-to-man last year, per Synergy.

In Friday’s game, the Jaguars ran into all sorts of foul issues, committing 37 personal fouls and giving up 56 FTA to 52 field goal attempts in the loss. 9 of the 10 Jaguars that played against Eastern Kentucky committed at least 3 fouls and two fouled out.

Darell Combs is a senior guard who can create in the pick-and-roll game and is projected as an All-Summit League player. He averaged 16 points per game last season while shooting 42% from three-point range. Combs, 6-foot-3, started his career at at Eastern Michigan and is looking to cut down on his turnovers in 2017 as he develops into a more complete playmaker.

He’ll be joined in the backcourt by a couple of fresh faces in Kellon Thomas and Ron Patterson, who transferred in from Kent State and Syracuse respectively. Both of the Indianapolis natives were both fairly well regarded prospects in the state of Indiana’s 2012 class and Patterson actually enrolled for a summer at Indiana before making the move to Syracuse.

Expect Patterson to provide slashing and defense, the 6-foot-2 guard reportedly has the longest wingspan on the roster. He also hit 3-of-6 threes in the season opener while fouling out in 23 minutes. Thomas is a 5-foot-11 guard who shot 41% on twos and 32% on threes with a 44% free throw rate last year at Kent State. He should complement Combs well in the backcourt and provide an extra playmaking option.

Matt O’Leary, 6-foot-8, 225 pounds, and Evan Hall, 6-foot-7, 200 pounds, anchor the middle for the Jaguars. O’Leary is an underrated passer, a good finisher, and he’ll step outside and attempt the three (28-of-100 last season). The senior forward finishes inside, picks up steals and is good on the glass. Hall played limited minutes as a freshman, but grabbed 10 rebounds and blocked two shots in 18 minutes on Friday night.

KenPom projects a an 80-63 Michigan victory in a 69 possession game, giving the Jaguars a 6% chance of pulling off the road upset. This should be a step up in competition from facing a Howard team missing its leading scorer, but still a game that the Wolverines should be able to handle.