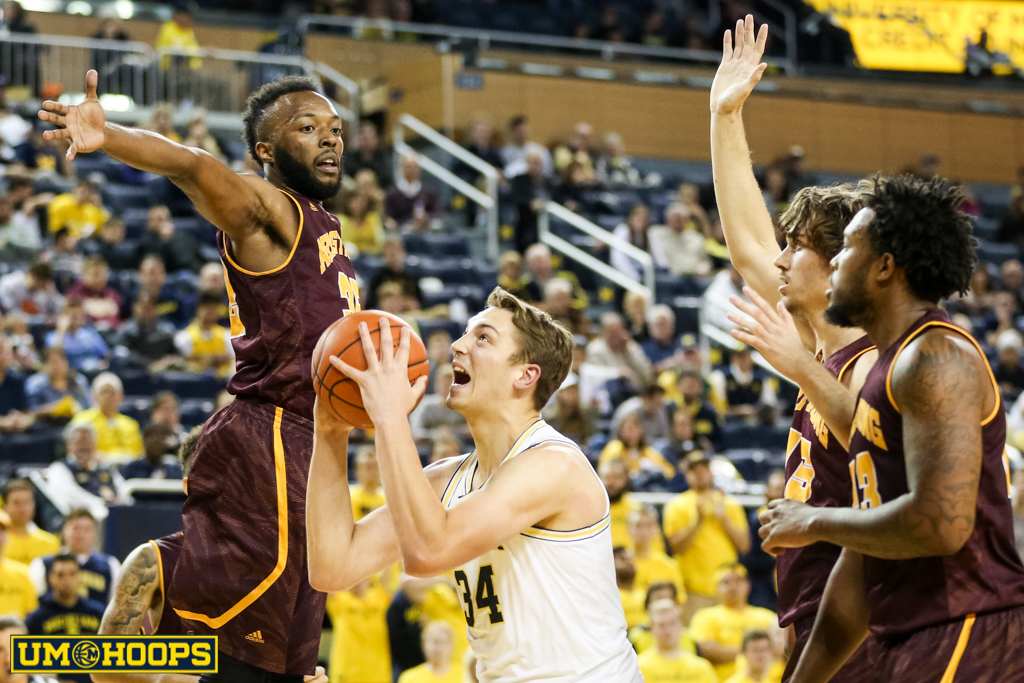 After a strong opening weekend for D.J. Wilson and Mark Donnal, perhaps Michigan’s starting lineup will change as the team heads to New York.

Through two games, Michigan fans have likely had the same reaction to D.J. Wilson that Derrick Walton has: “I smile every time he walks into the game,” the senior point guard said after yesterday’s win. Wilson and fellow big man Mark Donnal were key contributors off the bench in Michigan’s 2-0 start.

It was a larger-than-life Moritz Wagner who was featured on the big screen outside of Crisler this past weekend, and he shot the ball well, scoring 21 points over the two games while continuing to work on his defense and rebounding. Duncan Robinson, another starter, struggled with his shot but will start connecting eventually.

It was the bench duo of Wilson and Donnal, however, who had the bigger impact. In the two games, Wilson tallied 16 points and 22 rebounds, already surpassing his rebounding total from last season. Donnal posted 20 and nine, and made 10 of his 12 free throw attempts.

They entered yesterday’s game against IUPUI together (for Wagner and Robinson) at the 14:33 mark of the first half and immediately went to work. It often takes multiple players to rebound effectively, and that was evident on at least one offensive rebound, when Donnal crashed first and tapped the ball off the glass, only for Wilson to corral it.

They were re-inserted later in the half and were only the floor for the bulk of Michigan’s 13-0 run to close the half.

“When Mark went into game it changed things defensively,” John Beilein said. “He can plug gaps. Moe [Wagner] is still trying to learn where he should be sometimes. He’s guessing sometimes and the game needs to slow down for him in ball screen coverage…[IUPUI] was a quick team. All three of those guards were going downhill. When they see a center trying to figure things out, they just attack the big guy. Mark plugged that up and that was a big difference.”

Beilein attributed the improved defense to Wilson as well: “D.J. is really changing the way we guard. We can switch more because he can guard five positions.”

Wilson will guard anyone in practice, including Walton, to prepare him for game situations. He hasn’t always kept the little guys in front of him, but he’s still a threat to block shots. He had five blocks yesterday.

The quality minutes earned him the start over Robinson in the second half. Robinson only played 12 minutes total and Beilein said after the game he loves the idea of a long-range gunner coming off the bench. That would imply Wilson could be starting sooner rather than later.

Getting loose balls—without fouling—is something the Wolverines will work to clean up before heading to Madison Square Garden. Donnal has helped so far in that area. Whether he or Wagner is on the floor will partly depend on the opponent.

“There’s some hard-charging teams in the Big Ten,” Beilein said. “If you have a bunch of skill guys [in the game], they’ll pound you into the ground. For other teams, skill will be more important. We have to grow D.J.’s skill and get Moe more aggressive and [better at] anticipating plays; he’s a little slower reacting. Mark can do some great things. He’s not going to jump out of the gym, but he’s strong going after the ball. I’m proud of the way he’s played so far—two good games back to back.”

Unlike last year, healthier, more developed personnel give Beilein greater options regarding playing time. As the opponent level improves this week and the games figure to become more competitive, it will be interesting to see how he manages the minutes.