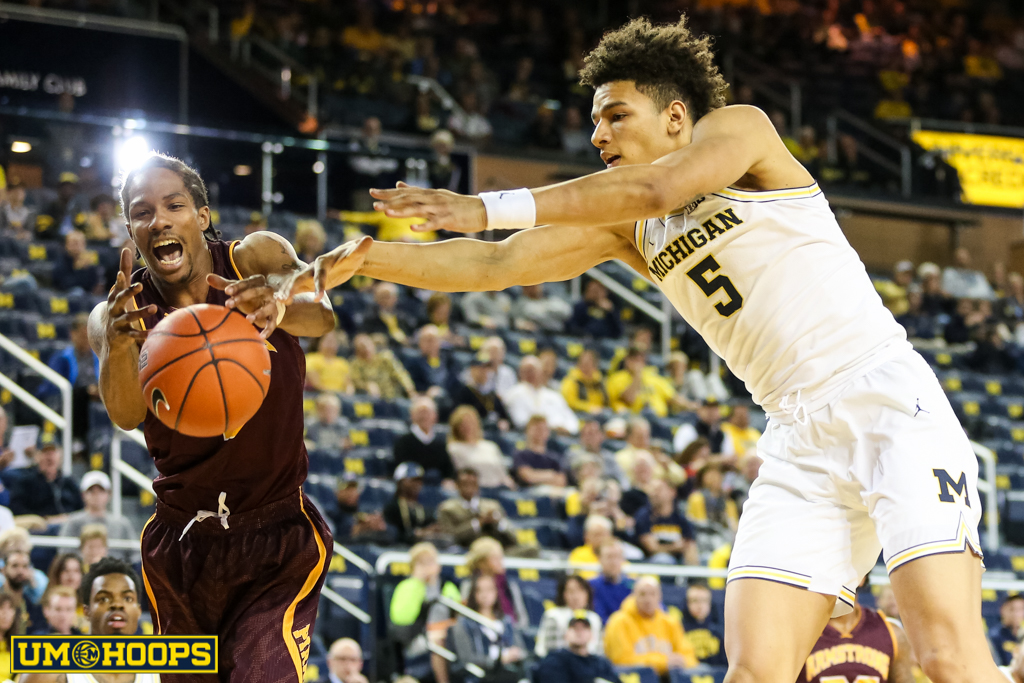 “I think DJ gives us some great athleticism and Moe gives us great skill. If Moe can make same jumps DJ’s made — and Moe had some rebounds today, right? — if he can have same difference in mentality. It’s a matter of time. When you ask a guy who’s never been to asked to rebound in his whole life…he’s learning. But there are techniques and a mentality. Those two at 6’10 — it’s tough to shoot over them.”

When it comes to season-opening doubleheaders, this one was fairly nondescript. While there were several games across the country that feature top teams duking it out against each other, Michigan spent the weekend in the confines of the Crisler Center, beating Howard, 76-58, Friday night before earning a 77-65 victory over IUPUI Sunday afternoon.

While the Wolverines didn’t have to sweat out either of their wins, there were still stretches of play in each game that left something to be desired by both coaches and players. Michigan allowed Howard to hang around Friday before pulling away late, and the first half was similar Sunday. IUPUI, led by Darrell Combs, took an early 18-11 lead before the two teams traded baskets and the lead for nearly the rest of the half. The Wolverines initially struggled to stop Combs — who scored 15 points in the first half — and the rest of the IUPUI squad, giving up open jumpers and lanes to drive through.

But after Michigan coach John Beilein called a timeout with nearly four minutes left, his team went on a 13-0 run to enter halftime with an 11-point lead and never led by less than nine for the rest of the game.

So Michigan’s slow starts in each game this weekend haven’t hurt yet, though that may change next week, when the Wolverines head to New York City to play Marquette and then either Pittsburgh or SMU in the 2K Classic.

Michigan, however, hasn’t appeared to have given Marquette any thought before today.

“We don’t try to focus on the games ahead,” said junior guard Muhammad-Ali Abdur-Rahkman after Sunday’s game. “But now that (today’s game is) over, we’ve got to change our mindset and buckle down on defense. That has to be a big staple for us — get stops and turn that into offense.”

Added redshirt sophomore forward DJ Wilson: “We haven’t really got to (Marquette) yet. We’ve been taking it one game at a time. But I know we have an off day tomorrow and then on Tuesday, we’ll start preparing for them.”

Stopping Marquette might be a challenge, the Golden Eagles scored 1.22 points per possession in a 95-71 win over Vanderbilt on Friday.

The redshirt sophomore continued to make an impact on the boards against IUPUI. After grabbing eight rebounds against Howard in 20 minutes of playing time, the lanky forward nearly doubled that against the Jaguars, grabbing 14 boards — four of which came off the offensive glass.

Wilson, who has received praise from Beilein for his development heading into this season, has come off the bench both games and provided an immediate spark for his team, especially when paired with sophomore big man Moe Wagner.

Added Beilein: “I think DJ gives us some great athleticism and Moe gives us great skill. If Moe can make same jumps DJ’s made — and Moe had some rebounds today, right? — if he can have same difference in mentality. It’s a matter of time. When you ask a guy who’s never been to asked to rebound in his whole life…he’s learning. But there are techniques and a mentality. Those two at 6’10 — it’s tough to shoot over them.”

Wilson was so productive on the both ends of the court for Michigan on Sunday that he even ate into the playing time of starting forward Duncan Robinson, who was on the court for just 12 minutes. And while he may not be a prototypical ‘4’ in Beilein’s system, Wilson’s improved rebounding may prove to be just too difficult to keep off the court.

“I was coming down on the break and I tried to stop and go into a step-back,” Walton said on Sunday when discussing the Friday night injury. “I kinda jammed it and slightly rolled it. It’s real stiff. I did a couple things after the last game and up until this game. It’s still a little stiff, but my guys carried me (today).”

Walton was still able to finish the game against Howard after the injury, though, eventually tallying 35 minutes, before playing another 36 minutes against IUPUI just a day and a half later.

Beilein said in the press conference after Sunday’s game that he had tried to give Walton more rest against Howard, but was unable to after several players found themselves in foul trouble early on. Another contributing factor has been the development of Xavier Simpson and Ibi Watson.

Simpson, in particular, would be able to spell Walton for longer periods of time. The freshman guard played just six minutes against IUPUI.

“Xavier and Ibi will give us [bench production] eventually,” Beilein said. “Right now, the game is too fast for them. When we get those guys up to speed (they’ll play more). Every day is another step closer for those guys.”

And though Walton admits he isn’t 100 percent right now, he also said he doesn’t think it’ll take more than a couple of days to get back to full strength, which means he should be good to go against Marquette next Thursday.