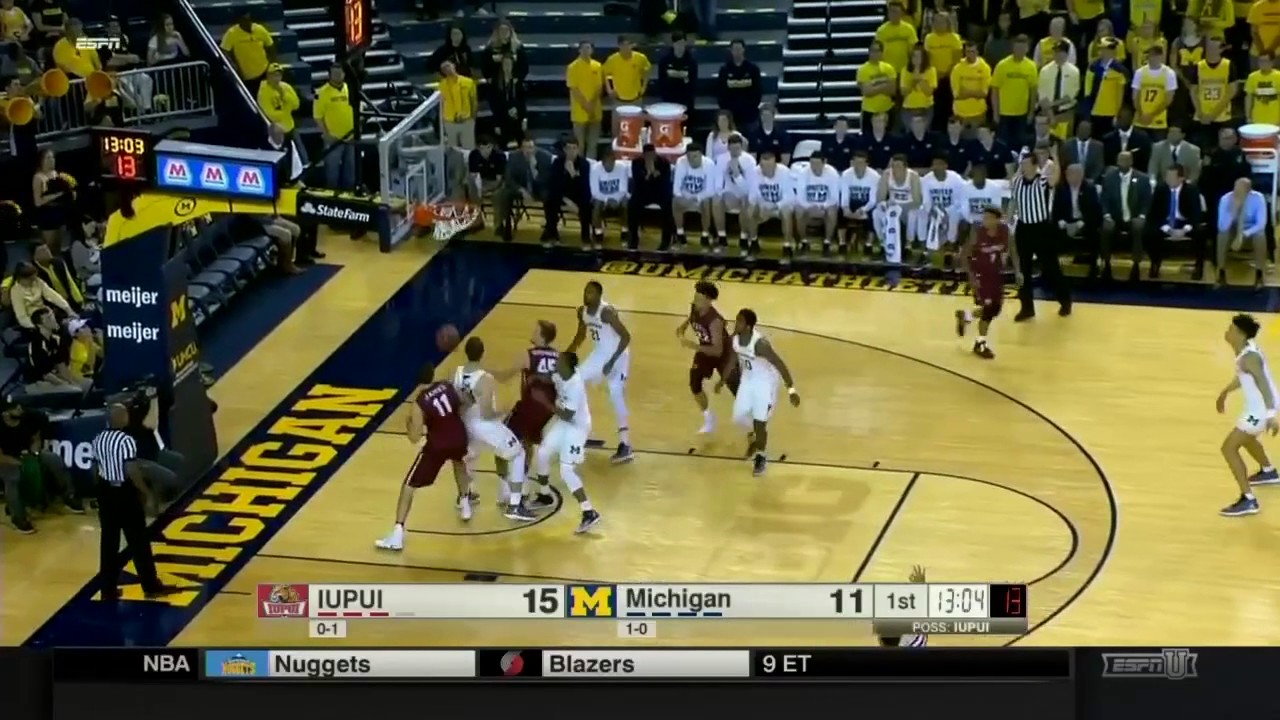 Michigan moved to 2-0 with an easy win over IUPUI to setup a big challenge in New York City this week, here are Five Key Plays from the win.

Michigan moved to 2-0 with an easy win over IUPUI on Sunday to setup a big challenge in New York City this week, here are Five Key Plays from the win.

When John Beilein was asked during the offseason about Michigan’s biggest problems defensively last season, he quickly (and accurately) focused on the Wolverines’ inability to stop dribble penetration. Beilein was quick to point out that the shorter shot clock and rule changes had led to more players just trying to beat their man off the bounce.

That was an issue for Michigan last year, and it was an issue on Sunday. IUPUI senior guard Darell Combs was the root of the problem as he scored 15 points on 7-of-12 shooting in the first half.

“I think we took him very seriously (in the second half). Not that we didn’t (in the first half), but his quickness, I think we understand who he was and tried to load up a little bit more and challenge him to pass, and he did make some good plays,” Beilein said after the win. “He’s just really quick to stay in front of. With the tempo the game and the way he was going downhill, until we went with ‘the late game, just get our starters out of there’ (mindset), they were under 50 points.”

Michigan improved defensively against Combs, holding him to 7 points in the second half, but its perimeter defense is going to continue to be tested moving forward and starting in New York City this week.

Michigan found itself down 32-30 late in the first half and needed to find an answer. The Wolverines weren’t getting stops and couldn’t build any momentum as the score seesawed back and forth between the two teams.

As a good team is expected to do, Michigan answered the bell in the final four minutes of the first half — outscoring IUPUI 13-0 to close the half.

“When Mark went into game it changed things defensively. He can plug gaps,” Beilein said. “Moe is still trying to learn where he should be sometimes. He’s guessing sometimes and the game needs to slow down for him in ball screen coverage.

“Mark doesn’t always get it right. This was a quick team. Five fifth-year guys. All three of those guards were going downhill. When they see a center trying to figure things out, they just attack the big guy. Mark plugged that up and that was a big difference.”

Michigan got the defensive stops while Muhammad-Ali Abdur-Rahkman was critical on the offensive end with a no-look ball screen pass and a big three-pointer off the kick.

3. Zak Irvin heats up from mid-range

Zak Irvin’s shooting continues to confound at times, but he’s been very effective knocking down mid-range jumpers around the elbows. Many would point out that this is one of the lowest value shots on the floor, but it has consistently been one of Irvin’s most effective.

“It was the first time we saw a hedge team like that,” Beilein explained. “We predicted they would play man-to-man…, we went to some of our package that we thought was most effective for him and our team.”

The ball screen game is all about taking what the defense gives you and Irvin stepped in and knocked down the mid-range jumper with consistency.

Mark Donnal has been the more consistent Michigan big man off the bench, but if Moritz Wagner keeps making plays like this it becomes hard to take him off the floor — even with his defensive woes.

Here we see Wagner pump fake from the three-point line and drive for an and-one layup, score with his back to the basket, take his man baseline off of a face-up and score with a reverse layup, score on a put-back through contact, and knock down a contested three.

Wagner is going to make mistakes and suffer a few growing pains, but Michigan needs to keep him involved in the offense because his skill and versatility adds a new element that prevents the Wolverines from becoming one-dimensional.

5. DJ Wilson does it all

DJ Wilson’s all-around performance could have led to an even longer cut up, but the 6-foot-10 sophomore appears to be reaching his potential early on this season. He was active all over the glass (14 rebounds), showed the ability to cut baseline for easy baskets, blocked five shots and even knocked in a three.

“When we recruited him, this is what we hoped. We recruited him and looked at potential,” Beilein said after the game. “You see it will take a little bit. He didn’t have body or mindset. He developed his body, and now his mindset is to get in there and get rebounds, loose basketballs, everything.”

This was a mindset that I didn’t really think DJ Wilson had in him — and there’s still another level to go — but his progress thus far has been really encouraging. He’s bringing things to the game at the four position that the Wolverines had missed badly since the departure of Glenn Robinson III.

“Defensively, last year, we couldn’t get him on the floor. Now he’s spent a year getting better. If he says to himself, ‘I am a rebounder and defender,’ he’ll get baskets. These guys will find him when he’s open.”