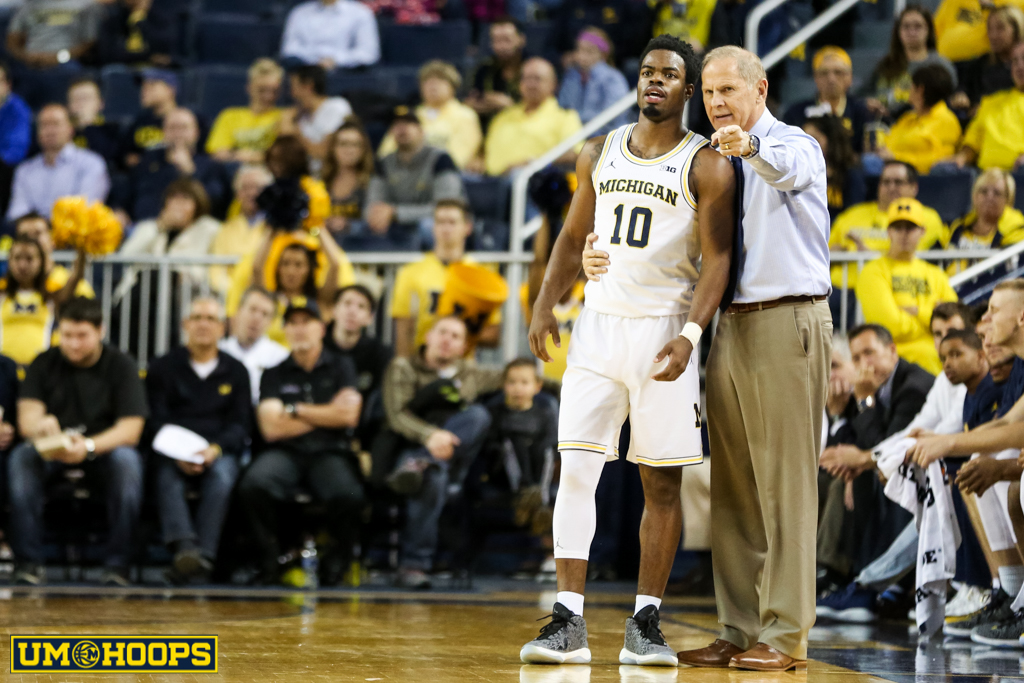 Michigan heads to New York tonight and will play Marquette at Madison Square Garden tomorrow night in the semifinals of the 2K Classic. Regardless of the outcome, they’ll play again Friday against SMU or Pittsburgh.

Michigan heads to New York tonight and will play Marquette at Madison Square Garden tomorrow night in the semifinals of the 2K Classic. Regardless of the outcome, they’ll play again Friday against SMU or Pittsburgh.

Point guard Derrick Walton has made 7-of-14 threes this season, though John Beilein wouldn’t mind seeing him become even more aggressive offensively. That means more outside shots and drives to the basket, especially since Walton is a career 82 percent free throw shooter and refs have been whistle-happy in the early part of the season.

But Beilein would also like to get Walton more rest. Leading up to the season, Beilein talked about the team’s health and depth allowing him to limit his starters’ minutes more so than last year. Through two games, that hasn’t been the case for Walton, who has played 35 and 36 minutes.

“The goal is to get [the minutes] down,” Beilein said, adding that 30 minutes is his preference. But as freshman Xavier Simpson continues to learn the offense, Beilein will lean on Walton if it means winning the game at hand.

In practice at least, Simpson will cut into Walton’s court time. Yesterday, the freshman took 2 out of 3 reps (instead of the typical 1/3 or 1/4). Using a chip sensor on the players’ backs, the staff can monitor workload in practice. Walton, Zak Irvin, DJ Wilson, and Xavier Simpson have the highest each week. To try and decrease that workload, Beilein often makes Walton and Irvin move to the sideline to coach their position group.

Blue in the Big Apple

This is the fifth straight season Michigan will be in New York. They won the Preseason NIT at Madison Square Garden in 2012-13 and beat West Virginia later that season at Brooklyn’s Barclays Center. They returned to Barclays the next two seasons (winning two of three games) and played in both arenas last year (a win against Penn State at MSG and an NCAA Tournament loss to Notre Dame at Barclays).

In that Penn State win at MSG last year, Irvin scored 20 points, making 5-of-8 from two-point range and 2-of-4 from deep.

“I can’t wait,” Irvin said when asked about returning to the World’s Most Famous Arena. “It’s always nice to go to New York because it feels like a home game.”

Pittsburgh, a potential Friday opponent, will likely have a good amount of fans as well, though Marquette and SMU will certainly have fewer than Michigan.

Beilein has fielded plenty of questions from the media (and even Maize Ragers) lately about Wilson’s short shorts. It’s been addressed here already, but just a reminder: Wilson calls it “Cali swag,” and it’s simply what’s comfortable for him.

As for Wilson’s improved play, particularly on the defensive end, his communication has been vital. He lets his teammates know where he is and points out where they should be, a function of being more comfortable with Michigan’s principles. He has asked coaches for film on some of the NBA’s best defenders such as Kawhi Leonard, Paul George, and Andre Iguodala.

Beilein has been encouraged with Moritz Wagner’s rebounding the past few days. Beilein said Wagner’s tendency during a rebound is to use one hand to battle with the opponent, leaving him just one to grab the ball. “We’ve finally got Moe boxing out with his body and going up with both hands,” Beilein said.

He also added that he’d have no problem, if foul trouble or injuries necessitated it, putting Jon Teske in the game.