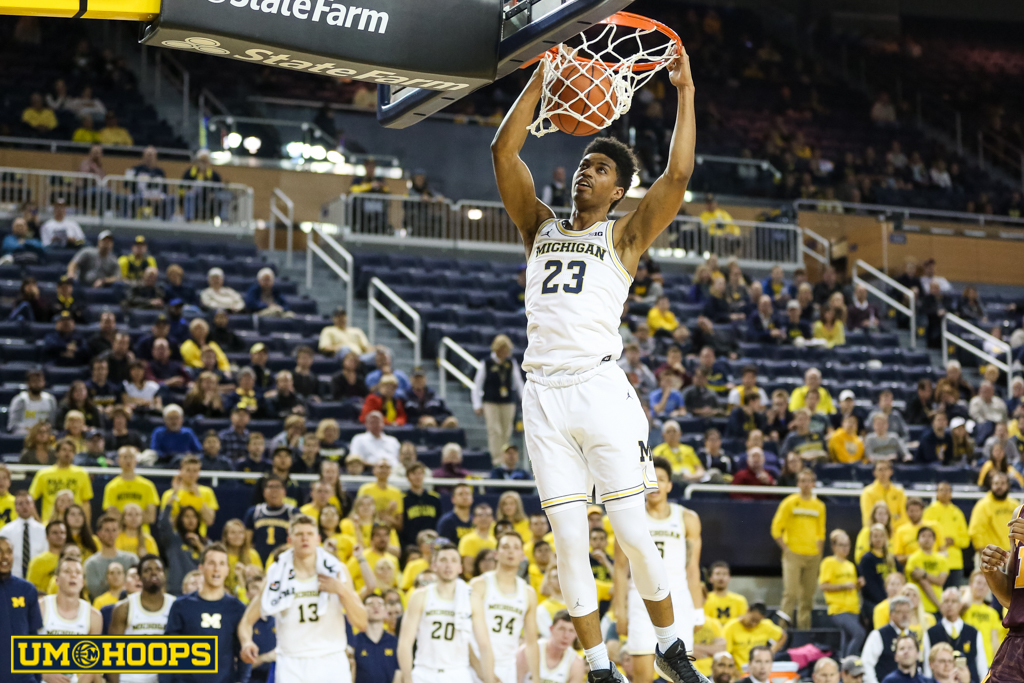 The first legitimate test of the college basketball season sets the tone for the next four months.

The first legitimate test of the college basketball season sets the tone for the next four months.

Last year’s loss to Xavier, Michigan’s win over Memphis in Maui, the 2012 Preseason NIT — they all were pivotal moments in those seasons. Whether it was the Xavier loss foreshadowing future struggles or the Preseason NIT proving that something special might be brewing.

The first big game is an indicator of what’s to come — whether that is a blueprint of where to improve (Iowa State and Charlotte in 2013-14) or an exposed flaw that is going to hamstring a team all year. Tonight is the first measuring stick for the 2016-17 Wolverines and, win or loss, we’ll know a lot more about this team when the final buzzer sounds in New York around midnight.

Marquette heads to Madison Square Garden with a 2-0 record (95-71 over Vanderbilt, 81-49 over Howard). The Golden Eagles underachieved last season, missing the tournament with Henry Ellenson (18th pick in the NBA Draft) in the lineup, but they’ve started the season putting up massive scoring numbers with an intriguing combinations of three senior starters and talented underclassmen.

Marquette ran Vanderbilt (95 points in 78 possessions) and Howard (81 points in 71 possessions) right out of the gym. Averaging 75 possessions per game, and 14.1 seconds per average offensive possession, the Golden Eagles are playing fast and shooting the ball well. Marquette is shooting 58.2% on twos and 42.3% on threes for a 60.3 eFG% (21st) through two games. Inside or outside and really across the board, Marquette has shot the ball well in its first two contests.

Despite its fast tempo, Marquette has done a good job of valuing the basketball. The Golden Eagles only turn the ball over on 16% of their offensive possessions, but haven’t made much of an impact on the offensive glass (209th in offensive rebounding rate) or at the free throw line (318th in free throw rate)

Defensively, the Golden Eagles have done a great job of forcing turnovers and creating easy points on the other end of the floor — a critical element of their offensive efficiency. Marquette has forced turnovers on 25% of its opponents’ possessions (34th nationally) and its steal rate of 14.1% is almost double the national average. A fifth of Marquette’s offensive possessions have been fast break possessions and they average 27.5 points per game off of turnovers — both clear indicators of just how many turnovers they’ve been able to force.

Through two games, Marquette has also done a great job of defending inside the arc. Vanderbilt and Howard combined to shoot just 37.3% inside the arc, but did do a good job of getting to the free throw line. Howard also managed to rebound over a third of its misses against the Golden Eagles.

JaJuan Johnson leads Marquette in scoring at 17.5 points per game. He’s a versatile scorer who can get involved in the game in different areas. He’s effective in transition and off the bounce and can knock down the three for good measure. He’s been the most active Marquette defender in the passing lanes with 7 steals in two games.

6-foot-5 sophomore Haanif Cheatham struggled with turnovers as a freshman, but has been lethally efficient early on this year. Cheatham is a versatile wing who is Marquette’s best defensive rebounder, an active defender and creator for others (9 assists in two games). The majority of his offense seems to come in transition, but he’s been very efficient — 58% on twos and 43% on threes.

6-foot-8 senior Katin Reinhardt is another talented wing in Steve Wojciechowski’s lineup. Reinhardt is a graduate transfer from USC who started his career at UNLV. He’s a career 37% three-point shooter who has no problem getting his fair share of shots up. He’s attempted 512 threes in his career, but didn’t shoot over 40% on two-point attempts until last season at USC.

6-foot-11 big man Luke Fischer left Indiana after a semester as a freshman and is now ready to finish his senior season at Marquette. Fischer is a presence on the offensive glass and a shot blocking threat who finishes over 60% of his twos. He’s active in the pick-and-roll game and is more than capable of playing with his back to the basket. He’s only used 15% of Marquette’s offensive possessions this season, but is a threat that the Wolverines have to be prepared for .

6-foot sophomore Traci Carter started the last game at the point guard position, but promising freshman guard Markus Howard started the opener. Carter has been Marquette’s best setup man while still valuing the basketball while Howard has turned the ball over on 40% of his offensive possessions.

6-foot-7 freshman forward Sam Hauser provides a defensive rebounding and three-point threat (7-of-11) off the bench, but he’s also struggled with turnovers early on (4 giveaways vs. Howard). He’s attempted 11 threes to just one shot inside the arc.

Michigan started the season as a slight favorite in this game according to KenPom’s preseason predictions, but the latest numbers give Marquette a 52% chance of victory and project a 74-73 Marquette victory.