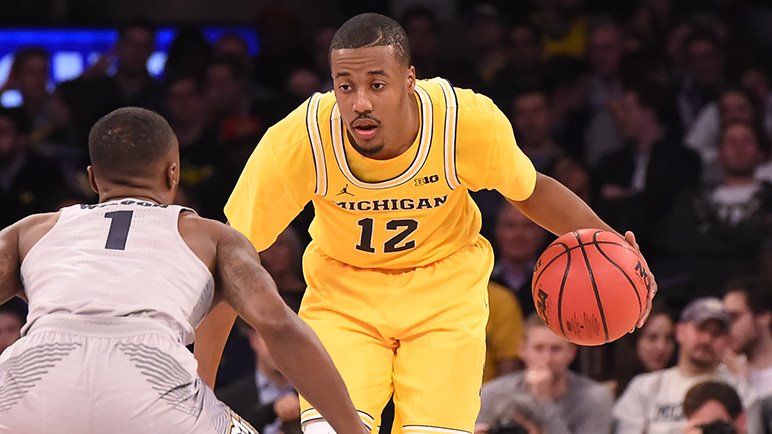 Michigan passed its first test of the season with flying colors, blowing Marquette out of the gym on Thursday night at Madison Square Garden. The Wolverines had the Golden Eagles doubled-up late in the second half and advanced to the championship round of the 2K Classic with a 79-61 victory.

Michigan passed its first test of the season with flying colors, blowing Marquette out of the gym on Thursday night at Madison Square Garden. The Wolverines had the Golden Eagles doubled-up late in the second half and advanced to the championship round of the 2K Classic with a 79-61 victory.

At times in the first half it felt like everything came up Michigan’s way — it also felt like every bounce or break was deserved. The Wolverines had the better game plan, execution and, surprisingly, showed more hustle. The first half was about as close to flawless basketball as Michigan has played in quite some time despite Derrick Walton only playing four minutes after picking up two fouls before the first media timeout.

Beilein’s decision to insert DJ Wilson into the starting lineup felt like a no-brainer before the game and he answered the call, finishing with a 10 point, 12 rebound double-double in 34 minutes. Duncan Robinson coming off the bench worked might have worked even better, he hit three triples and scored 10 points in just 7 minutes.

Freshman point guard Xavier Simpson is still figuring out the Michigan offense, but he gave Michigan 16 critical first half minutes of terrific defense and steady ball handling while Zak Irvin was the first half star as he sliced apart the Marquette defense with his passing out of the pick-and-roll game.

The Wolverines made things interesting in the second half, allowing Marquette to cut the lead to 12 points late, but pulled away with a few critical late baskets from Zak Irvin (a contested three) and DJ Wilson (an alley-oop through contact).

A year ago the Wolverines were demolished in their own gym by a Big East team in the second week of the season. Despite returning so many players it’s tough to deny that this was the kind of game that could forge an entirely different identity for a group of players that’s nearly identical, but feels so different.

Michigan’s offense was superb in the first half, scoring 50 points in 40 possessions, but turnovers became a significant problem in the final 20 minutes. The Wolverines tried to sit on the ball with the big lead, but gave the ball away 9 times in 33 second half possessions. Despite the turnovers, Michigan only allowed Marquette to score 6 fast break points and 13 points off of turnovers — both well below their early game performances.

The Wolverine offense continued to be more diverse than we’ve seen over the last couple of seasons. The Wolverines shot 39% from three, but also made 60% of their twos and got to the free throw line 20 times. Five Wolverines reached double figures and John Beilein got as much production out of his frontcourt as he has in a long while.

Marquette’s execution left plenty to be desired — both teams were whistled for an extraordinary number of travels — but Michigan cleaned up the glass, held Marquette to sub-50% two-point shooting and took the three-point shot away in the first half (1-of-3).

Michigan won just three games by double-digits against high-major opponents last year — 11 points over Rutgers, 23 points over Penn State, 10 points over Illinois — and this the kind of the performance that can accelerate this team’s growth and confidence. Next up is a 24 hour turnaround to face an SMU program that has dominated Michigan to a man over the last two years.

If Marquette was a pop quiz, SMU feels more like an important midterm that you forgot to study for. A win isn’t out of the question — KenPom projects a 68-67 U-M win — and the Wolverines could squash plenty of doubts, both internal and external, with another strong showing on Friday night.