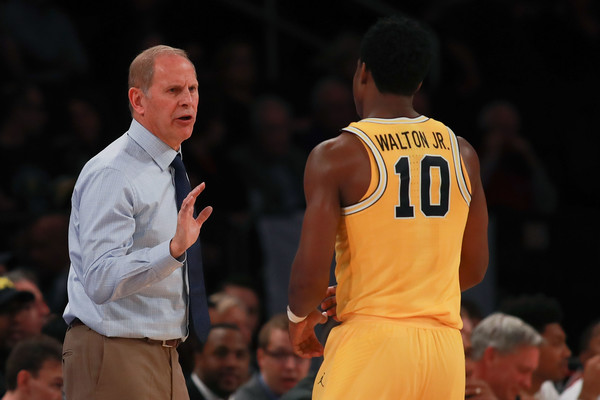 Michigan didn’t just win two games in New York City this weekend, it put together back-to-back dominant performances. Both games were, for all intents and purposes, decided by half time. This wasn’t just the best stretch of basketball that Michigan has played in two years, the second win was against the same team that provided two of the lowest moments of the last two seasons.

A month and a half ago Michigan players and coaches sat through an hour of questions about their toughness and whether they would be any better than last year’s team given that they return so many of the same players. Zak Irvin and Derrick Walton sat there and answered questions about embarrassing losses, bad defense, inconsistency and everything else.

They talked a good game and promised this year would be different, but it never felt like there was any real reason to believe them. Sort of like John Beilein saying that he wants DJ Wilson to play like Troy Williams in a summer radio interview — an idea that seemed so far disconnected from anything that DJ Wilson had shown in two years in a Michigan uniform that it sounded insane.

Turns out that Michigan’s offseason talk wasn’t as cheap as it sounded.

On Friday night in Madison Square Garden, Michigan’s seniors sat at the podium smiling and were asked how it felt to beat SMU to win the 2K Classic given some past results.

“It feels great,” Zak Irvin said with a knowing laugh of satisfaction.

Michigan didn’t just win two games in New York City this weekend, it put together back-to-back dominant performances. Both games were, for all intents and purposes, decided by half time. This wasn’t just the best stretch of basketball that Michigan has played in two years, the second win was against the same team that provided two of the lowest moments of the last two seasons.

Derrick Walton shot the Wolverines into an early lead, finishing with a career-high 7 triples on the night, and the new-and-improved Wolverine defense handled the rest. Senior big man Mark Donnal had 9 first half points and two drawn charges while DJ Wilson was all over the floor and held SMU star Semi Ojeleye to 13 points on 16 shots.

Michigan extended its lead to 19 points by half time and the only questions left to answer were when John Beilein would empty his bench and whether the Wolverines would win by 20 or 30.

Michigan’s offense was lethally efficient, scoring 1.31 points per possession (a mark Michigan hasn’t reached against a high-major opponent since 2014) and the offensive approach was more along the lines of traditional Beilein ball. The Wolverines shot 13-of-31 from three-point range and then made easy looks around the basket (14-of-20). Michigan assisted on 16 of 27 baskets and turned the ball over only four times.

The offense was led by its seniors as Walton and Irvin were 13-of-26 from the floor for 39 points and tallied 11 assists to just 1 turnover — they were responsible for 24 of 27 made baskets on the night.

The Wolverines held SMU to .93 points per possession for the game and .8 points per possession in the first half when the game was decided. Michigan’s first half defensive rebounding was as good (2 SMU offensive rebounds) as it was bad in the second half (16 SMU offensive rebounds). Perhaps the most telling statistic about Michigan’s defense was that SMU shot just 37% inside the arc. The Wolverines have legitimate options to defend the rim — namely DJ Wilson — and they are getting the job done.

Last year the Mustangs dunked all over Michigan — this year the Wolverines had three dunks and SMU didn’t make a single dunk. Buckets are buckets, but that had to be a point of pride for a Wolverine team that was flat out embarrassed in Dallas last season.

What now? Michigan played so well in New York City that it’s almost impossible not to readjust expectations. They say that a team is never as good or bad as it looks on any given day, but this was the best two-game performance from Michigan since 2014 — the sort that I wasn’t sure this team even had in it. The Wolverines are almost certain to jump into the top 25 — they are now ranked 15th by KenPom — and next up is a trip to face South Carolina (4-0).