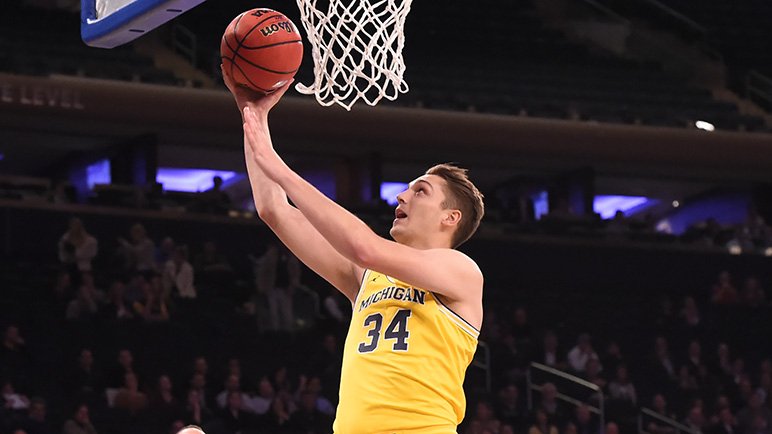 While there have been more than a couple of demoralizing recent losses, there’s no denying that SMU handed Michigan two of its most humbling defeats in the last two seasons.

While there have been more than a couple of demoralizing recent losses, there’s no denying that SMU handed Michigan two of its most humbling defeats in the last two seasons.

In 2014-15, the Mustangs walked into the Crisler Center and put a 17-0 run on the Wolverines late, holding them scoreless for close to the final 10 minutes of play. In 2015-16, Michigan traveled to Dallas and lost by 24 points on a barrage of dunks that played out like this clip on repeat.

There’s no sugar coating the narrative here. Beilein didn’t hesitate to admit that SMU “really put it on us” and “just killed us” when discussing the Mustangs on Thursday night. SMU has physically punked Michigan twice in two years and this is a third chance for the Wolverines to put up a fight, but they’ll have to do it on short rest.

This isn’t the same SMU team that Michigan faced last year — lethally quick point guard Nic Moore and Jordan Tolbert (and his 23 points on dunks) both graduated — but they looked plenty impressive on Thursday night as they rolled by Pittsburgh. There’s still NBA-talent, legitimate size and an array of versatile wing players.

Tim Jankovich’s group is ranked 8th nationally in average height and they can dominate a game from the inside out. The Mustangs have rebounded 46% of their misses through three games, 12th best in the nation through early season play. Last year at Moody Coliseum, the Mustangs rebounded 53.8% of their missed shots, shot 59% on twos and 53% on threes

This group appears to be just as strong on the offensive glass, but isn’t quite as good of a shooting team, especially from the perimeter. The Mustangs are shooting 55% on twos (69th) and 37% on threes (104th) for a 55 eFG% (69th).

Defensively, SMU forces turnovers on 25% of its opponents’ possessions (30th). The Mustangs have also shut the three-point line down, allowing just 27% (75th) three-point shooting this season. SMU has been strong in the middle defensively, allowing 45% two-point shooting and 27.5% offensive rebounding, and really the only weakness on the defensive side has been the tendency to be a bit foul heavy.

Shake Milton is the top pro prospect on the Mustang roster. He’s a versatile do-it-all guard at 6-foot-6, 205 lbs who creates for others and gets in the paint with a perimeter shot to boot. He shot 43% from long distance as a freshman, but he’s just 5-of-16 to start the season from long distance this year. Milton plays a point guard role for the Mustangs and he was the one making big plays happen late in their win over Pittsburgh.

6-foot-7 Duke transfer Semi Ojeleye is eligible this season and he’s an overpowering player down low at 235 pounds. He’s been a dominant force early on this season, averaging 23 points and nine rebounds per game through three contests. Ojeleye can bully people down low, but he also finished several lobs around the basket. He’s a monster rebounder on both ends of the floor and is shooting 59% on twos and 46% (6-of-13) on threes for good measure.

Ben Moore is a long and athletic big man who blocks shots, posts up smaller defenders and gets to the free throw line. He can play above the rim and is active on the offensive glass. He’s only 6-8, 220 pounds which makes him a bit light for a center, but his athleticism has to be accounted for around the basket and he’s a great cutter.

His backup, Australian freshman Harry Froling, isn’t small for the center position by any measure. Standing 6-foot-11, 260 pounds, Froling has great hands and feel around the basket. He’s taken a bit of time to get used to the college game, but he made some great plays and not some not so great plays out of the post on Thursday night. He hasn’t put everything together quite yet, but he has great potential down low.

6-foot-6 senior Sterling Brown is a career 58% two-point, 46% three-point shooter who gets involved on the offensive glass, at the free throw line and distributes. He had 9 points, 10 boards and 3 assists vs. Michigan last year and it’s at this point in the scouting report where you start to realize how many versatile 6-5, 6-6, 6-7-type wings SMU has that can impact the game on both ends of the floor, inside and outside and on the glass.

Sophomore forward Jarrey Foster is an impressive finisher, making 13-of-16 shots inside the arc and 2-of-4 from three. He’s also an athletic shot blocker and offensive rebounder at 6-foot-6.

6-foot-5 junior Ben Emelogu has struggled with his shot this year (3-of-10 on twos, 1-of-10 on threes) and has been turnover prone, but he’s a plus defensive rebounder off the bench.

This is a gut check for Michigan. Playing on short rest is difficult for anyone, but playing a team that has dominated you over the last two seasons adds to the challenge. KenPom projects a 68-67 Michigan win with a 52% chance of victory. Win this one and it feels like this thing could really get rolling, but either way the Wolverines won’t have long to wait before another challenge with a trip to South Carolina on the schedule next week.