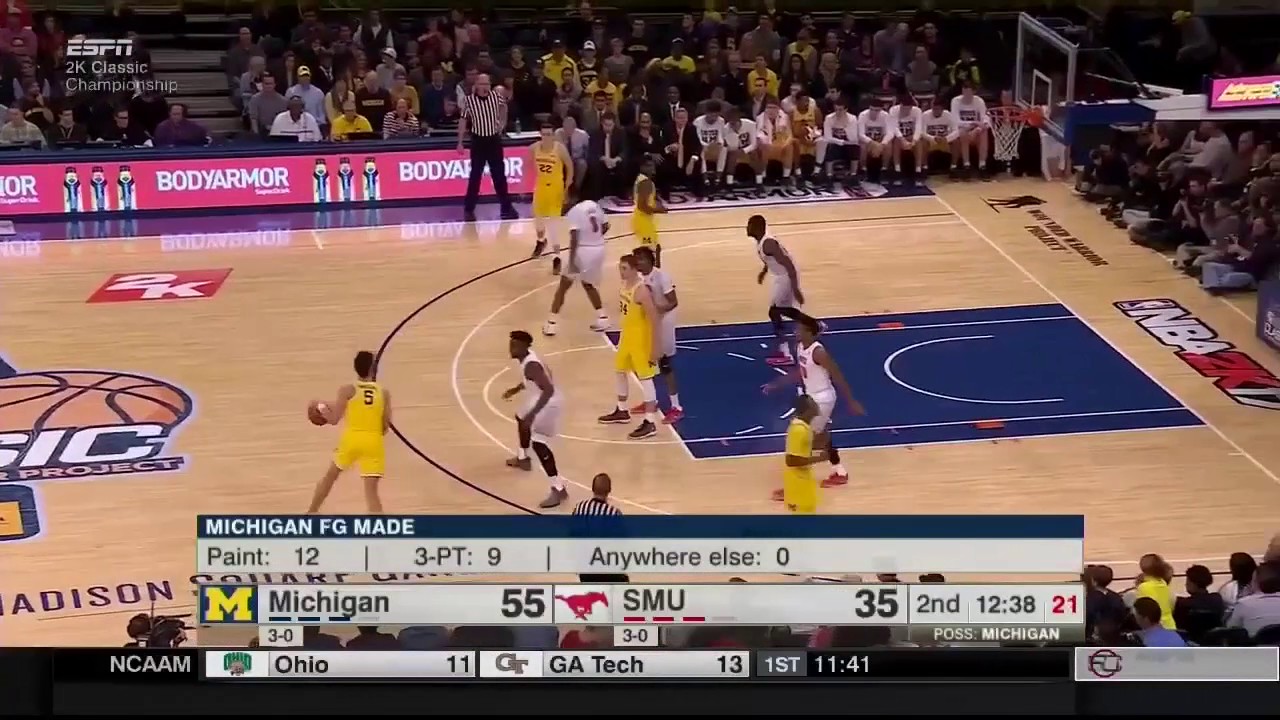 There weren’t many high-leverage moments during Michigan’s run through the 2K Classic in New York City as the Wolverines won by 18 and 22 points over Marquette and SMU. That being said, we still wanted to break down some film so here’s a look at what caught our eye in New York City.

There weren’t many high-leverage moments during Michigan’s run through the 2K Classic in New York City as the Wolverines won by 18 and 22 points over Marquette and SMU. That being said, we still wanted to break down some film so here’s a look at what caught our eye in New York City.

Derrick Walton set a career-high with 7 made three-pointers on Friday night, following up a rare 0 point scoring effort on Thurdsay against Marquette. Walton hit early — three triples before the first TV timeout — and then he just kept on hitting as Michigan blew out the Mustangs.

“He hit three deep threes (early), it didn’t look like to me that he was toeing up the line with nobody guarding him,” SMU head coach Tim Jankovich said after Friday night’s game. “It looked to me like he was shooting over a hand from distance. One of them I know he was shooting over 6-8.

“I just thought he played with an amazing amount of confidence. We could tell in two strokes that he’s got his game on tonight. I don’t get to see him play all that much, I don’t know if that’s common every night, but I know one thing he was darn good tonight.”

Walton has elite shooting ability, but his confidence and aggressiveness with his stroke seems to come and go. This could be the sort of performance that takes Walton’s offensive game to the next level moving forward.

We’ve written about three-point shooting in Five Key Plays quite a bit over the years, but we’ve rarely discussed rim protection.

Michigan has blocked 20 shots in four games this year. Last season it blocked just 81 shots in 36 games. Opponents shot 65% inside of five feet against the Wolverines last season, they are shooting just 51% inside of five feet this season. There’s a lot more basketball to play, and significant questions about sample size, but Michigan has shown that it is serious about improving its rim protection this season.

The Wolverines blocked nine shots in New York City and successfully contested countless others. The first clip of this video really set the tone against SMU — a team that dominated the paint last season against Michigan — as Semi Ojeleye attempted to isolate DJ Wilson from the perimeter and had his shot swatted right back. On the ensuing offensive possession, Wilson went back down the floor and scored right over Ojeleye.

Wilson’s length has made a serious impact all over the paint, and he wasn’t going to be bullied by Ojeleye. Later in the game, Wilson even stepped out and blocked a jumper for good measure.

3. Bigs get involved in the ball screen game

Zak Irvin and Mark Donnal set the tone early and often with their connections out of side ball screens and side dribble hand offs. When Irvin has been at his best over the last two years, he’s been finding this pass consistently. When he’s struggled, he usually forces the pass or can’t find it and settles for a tough jumper.

I thought Irvin’s chemistry with Donnal really stood out all week as Irvin knew where Donnal was going to be and put the pass in the right place and then Donnal was ready to catch and finish efficiently.

With last week on film, I’d expect teams to try to sell out to take the roll option away when Irvin runs this action. On Sunday, IUPUI sagged in the lane against the ball screen and forced Irvin to bury mid-range jumpers. He did that so effectively that Marquette and SMU clearly took a different approach. The pick-and-roll game is a constant adjustment and it will be interesting to see how South Carolina approaches the same look on Wednesday.

This Michigan team showed a bit of attitude last week in New York City. Last year’s iteration had a reputation for getting dunked on, this year’s group did the dunking in Madison Square Garden.

Michigan pushed the tempo at the right times and DJ Wilson continued to emerge as a legitimate finishing threat. Mark Donnal and Moritz Wagner also got into the action with a couple of dunks themselves, Wagner’s a Porzingis-style slam off the bounce and Donnal’s a transition look from Zak Irvin.

This isn’t the most athletic roster from top to bottom, but the Wolverines did a good job of finding the right spots to finish at the rack and they did so with a bit of swag — something that was sorely lacking from last year’s team.

A lot was made this offseason, and rightfully so, about Michigan’s lack of a go-to guy — or at least debate surrounding who that go-to guy should be. Currently, Derrick Walton runs the team, but when the offense breaks down it is usually Zak Irvin or Muhammad-Ali Abdur-Rahkman that tries to make a play.

Both players were effective attacking the basket in New York City. Irvin was excellent at recognizing pick-and-roll switches and attacking rather than settling for a jumper. He finished time after time with a nice one handed scoop shot at the rim.

Abdur-Rahkman was his typical self, converting isolation situations from any angle and any circumstance. His ability to just get a bucket is invaluable on a team that lacks playmaking off the bounce.