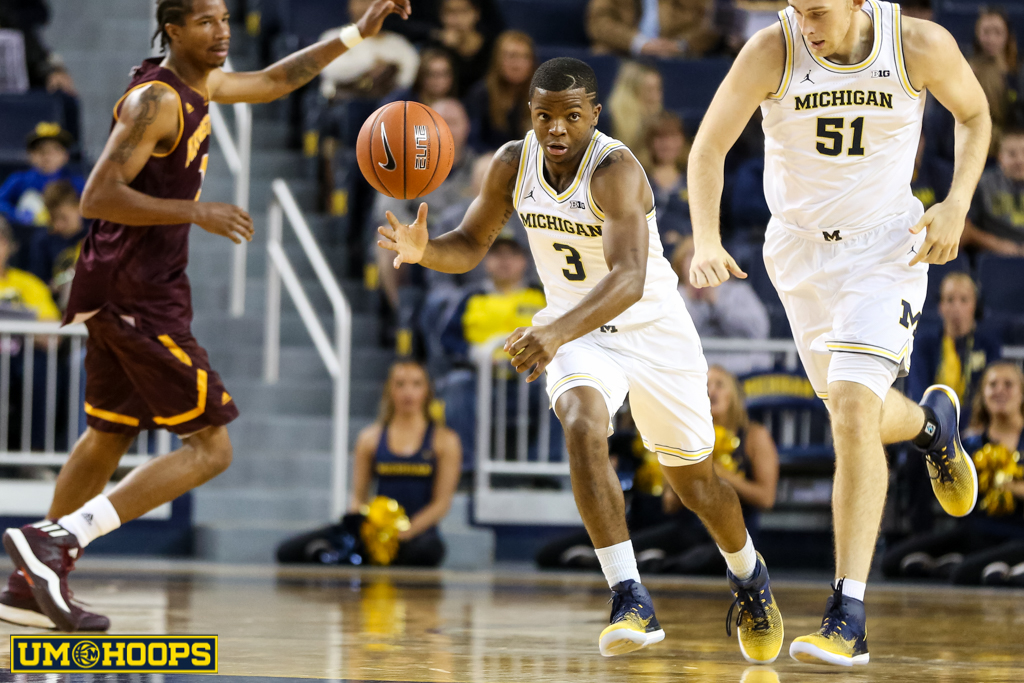 “These are always really big challenges,” said Michigan coach John Beilein. “South Carolina’s got a terrific team. They had two really good big men last year, they got all their perimeter (players) back and their young kids that play inside are as physical as anyone we’ve seen — really posting up strong.”

The No. 25 Michigan basketball team is coming off a big week in New York City — one that saw the Wolverines re-insert themselves in the national spotlight with wins over Marquette and Southern Methodist at the 2K Classic Tournament in New York City, entering both the AP and USA Today Coaches Poll shortly afterward.

Neither victory was particularly close as Michigan (4-0) staked itself out to an early double-digit lead in each game behind strong play from its newfangled frontcourt, and with their win Friday night, the Wolverines snapped a two-game losing streak to the Mustangs that included a 24-point blowout almost exactly one year ago.

Now, the Wolverines will look to bring that momentum on their first true road trip of the season.

Michigan will travel to Columbia to face an undefeated South Carolina team with a dangerous trio of guards and a long and athletic frontcourt.

“These are always really big challenges,” said Michigan coach John Beilein. “South Carolina’s got a terrific team. They had two really good big men last year, they got all their perimeter (players) back and their young kids that play inside are as physical as anyone we’ve seen — really posting up strong. Frank’s teams always play hard. They’re really going to be very aggressive defensively, turn us over, get steals, et cetera. We’re going to have to be really good with our offense.”

“And then staying in front of them on defense is a challenge. They’ve really got some great quickness … The three perimeter guys are shooting the ball the lights-out right now, too. It’s a tough challenge, to stay in front of them and to contest their outside shooting.”

Senior Sindarius Thornwell leads the way for the Gamecocks with 20.8 points per game, with an impressive shooting split (fg/3pt/ft) of 45/48/91.

“I look at last year’s stats a lot as well, and (Thornwell’s) assist-turnover (ratio) last year was great,” Beilein said. “He’s a consistent 35-40 percent shooter over his career … He’s just a good player. When you have a senior that’s been starting for a few years, that’s what they should be.”

South Carolina also features a familiar face in their backcourt in sophomore guard PJ Dozier. Dozier, a member of the class of 2015, was heavily recruited by Michigan, taking an official visit to Ann Arbor in the fall of 2014.

But the lanky 6-foot-6 wing had numerous family ties to South Carolina — his dad and uncle both played for the men’s team while his sister played for the women’s team — and also grew up in Columbia, both of which were factors that most likely influenced his decision to sign with the Gamecocks.

Dozier played extensively his freshman year with mixed results, shooting 38 percent from the field and averaging just above 21 percent from behind the arc. But he’s off to a quick start in his sophomore season and is his team’s second-leading scorer at 11.5 ppg, having raised his shooting percentages to 42 percent and 47 percent on field goals and 3-pointers, respectively.

“I saw (Dozier) as a multi-position player, a guy that probably is more Caris-like that can see the floor,” Beilein said. “(He) did not go in there with a jump shot — I think last year in the league, he was 1-for-21 from three, and now he’s 7-for-15, so he’s developed that … But he can really see the floor. He’s just a player. He’s a 6’6 player. So much like Caris Levert. That’s why we thought that would’ve been a great replacement there.”

While it’s still early in the season — Michigan has yet to reach the halfway point of its non-conference schedule — the Wolverines and their coach recognize the opportunity that waits for them in Columbia: a chance for an impressive win in a hostile environment, and another chance to prove that Michigan belongs in the national conversation this year.

Michigan’s freshman point guard, Xavier Simpson, has yet to receive the playing time that many expected him to have early on.

Simpson has averaged just 10.3 minutes through the first four games of the season, leaving the bulk of backcourt minutes to Michigan’s upperclassmen.

The lack of substantial playing time could be an initial effect of redshirt sophomore forward DJ Wilson’s emergence. Wilson now starts at the ‘4’, which has shifted players like Zak Irvin and Duncan Robinson down the lineup and into the available backcourt minutes.

But the biggest reason Simpson has yet to see more time is most likely due to his continuing development — a process that Beilein has emphasized will take its time early on.

“The stuff that we’re drilling (Simpson and Ibi Watson) in right now, to be honest with you, is the stuff you learn in basketball camp,” Beilein said. “ … Believe it or not, there’s like seven or eight ways to pivot, how to dribble the ball with speed, how to dribble the ball with strong, hard dribbles. The stuff that we’re working on in there is all obtainable for them, and that’s why we’re excited about them. And they’re very willing to work at it as well.”

Against Marquette, Simpson played 18 minutes, the most he has all season, after senior point guard Derrick Walton was plagued with foul trouble in the first half. And while Simpson’s contributions may not have shown up in the boxscore, Walton was still impressed by what he saw from the young guard — perhaps a sign that Simpson is hitting an upward curve in his development.

“I know for a fact, being that young and getting thrown to that spot, you can be kinda nervous, but (Simpson) did more than well,” Walton said. “He ran our sets, he called some stuff on his own. It was just great for him. I think going forward, that’s something he can build his confidence off of, and that’s always a game he can look back to and see how well he played.”