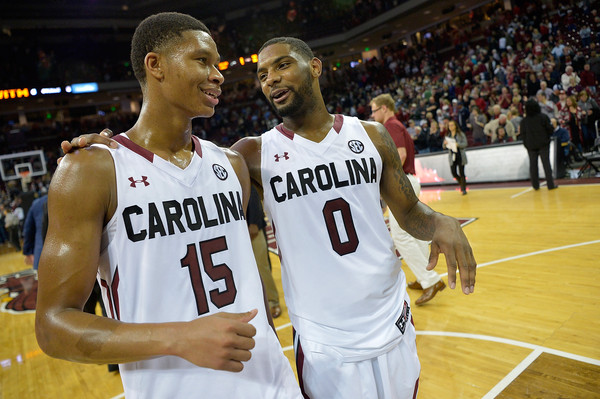 Michigan didn’t have much time to pat itself on the back after an impressive weekend in New York City. John Beilein didn’t even give the Wolverines a day off on Saturday when they returned to Ann Arbor and now they are back on the road today to face South Carolina.

Michigan didn’t have much time to pat itself on the back after an impressive weekend in New York City. John Beilein didn’t even give the Wolverines a day off on Saturday when they returned to Ann Arbor and now they are back on the road today to face South Carolina.

South Carolina (4-0) has beat up on some fairly lackluster competition at home early on with its best win coming over Monmouth (87th KP) in overtime. The Gamecocks started last season 15-0 and just missed out on the NCAA Tournament, making them the second team that Michigan will face this year that it just beat out for a NCAA Tournament bid.

South Carolina didn’t lose a home game until February 13th last year (to Kentucky) so Frank Martin’s team can certainly be dangerous on its home floor. The timing of this game — 5 p.m. on the Wednesday night before Thanksgiving — should negate some of the student enthusiasm in Columbia.

South Carolina’s offense is good at many of the same things that Michigan just saw from SMU. The Gamecocks are terrific on the offensive glass, rebounding 41.6% of their misses (12th nationally), and are also a solid shooting team. Several USC players are on pace for career years from long distance and, as a team, South Carolina is shooting 52% on twos and 40% on threes for a 55.5 eFG% (52nd).

There is at least a chance that South Carolina’s offense has been padding its stats against lackluster competition. USC scored an impressive 1.19 points per possession combined against La Tech (157th), Holy Cross (258th) and SC St (319th), but just managed just .85 points per possession against Monmouth (86th).

Defensively, Frank Martin’s group has been tough to score against. Opponents have managed just a 40.8 eFG% through four games against the Gamecocks, shooting just 40% (30th) on twos and 28% on threes (60th) — those numbers are a ringing endorsement of South Carolina’s length and athleticism around the basket.

South Carolina has been good on the defensive glass, but doesn’t force many turnovers and has struggled to stay out of foul trouble. Teams have attempted 42.9 free throws per 100 field goal attempts (251st) early on this season. Frank Martin isn’t afraid of sprinkling in a bit of zone, generally a 2-3 out of baseline out-of-bounds sets or some token pressure before falling back into a 2-3. USC plays zone defense on 18% of its possessions, per Synergy, but is better in its man-to-man looks.

Senior guard Sindarius Thornwell has been a heavy minute, high usage player for four seasons now in South Carolina. Seniors tend to reach another gear — something Michigan is banking on this season as well — and Thornwell has been very efficient early on this season. He’s shooting 48% from three-point range, he’s blocked 6 shots in 4 games, he’s getting after it on the offensive glass and he’s getting to the line. There’s not much that the 6-foot-5 guard can’t do, especially if the three is falling. He’s averaging 21 points, 7 rebounds and 3 assists per game.

Another senior, 6-foot-2 guard Duane Notice, mans the point guard position. Notice has been an on-and-off starter over the last four years and, similar to Derrick Walton, he’s a more effective perimeter shooter than two-point scorer. Notice shoots 37.7% from long distance for his career compared to just 38.5% inside the arc. His assist numbers have fluctuated, but he’s handed out a solid 17 assists in four games. The drawback? He’s turned the ball over three times in every game this season.

6-foot-6 sophomore PJ Dozier was a non-shooter last year, but the versatile playmaking guard has expanded his range. Dozier shot just 42% on twos and 23% on threes (10-of-43) last year, but is 7-of-18 on twos and 7-of-15 on threes this year. He’s one of South Carolina’s better setup men, but turnovers have plagued him over his first season and change in Columbia. Beilein compared Dozier’s playmaking ability to Caris LeVert with his ability to slash and see the entire floor.

Silva has put up elite offensive rebounding numbers (11 offensive boards in 71 minutes) and blocks (9) through the opening four games. He’s an elite athlete and should provide another big time test for the new and improved DJ Wilson.  Kotsar is a solid finisher (13-of-16 2P), plus-offensive rebounder and a legit shot blocking threat. Both players have had early success with their back to the basket in limited opportunities — Silva has scored 11 points on 8 post ups, Kotsar has scored 7 points on 5 post ups

6-foot-4 senior Justin McKie is one of the first players off the bench and he’s finished well inside the arc (10-of-14), but is a career 23% three-point shooter.

This one has all of the makings of a trap game from the first road game to the classic coach speak of ‘handling success’. Look no further than Indiana dropping a game at IPFW last night despite controlling ticket sales and having a majority Hoosier crowd.

KenPom projects a 69-67 Michigan win, giving the Wolverines a 55% shot at advancing to Thanksgiving with an undefeated record. Vegas likes the Wolverines even more, calling the Wolverines 4.5 point favorites. A third win over a high-major team away from the Crisler Center would be a big step for the Wolverines and provide a solid resume foundation moving forward, but this one isn’t going to be straightforward.