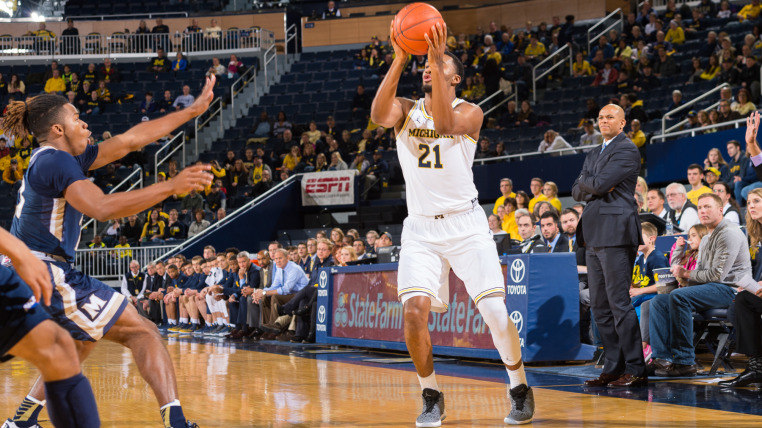 Michigan bounced back from its first loss of the season with a comfortable win over Mount St. Mary’s.

Michigan sports fans will not remember this day fondly, but not because of the men’s basketball team. The Wolverines beat Mount St. Mary’s 64-47 at Crisler Center on Saturday night.

Michigan (5-1) bounced back from its first loss of the season with a less-than-dominant performance against a Mount St. Mary’s team that fell to 1-6. The Wolverines went on a 25-4 run to close the first half and led 33-16 at the break. And while they pushed the lead to 19 halfway through the second, five minutes later the margin was just eight. Michigan ended the game on an 11-2 run.

“All the sudden you go to the bench…as you can see [the deficit] can go to eight [points] like that,” Beilein said. He praised Watson’s and Simpson’s effort in practice and said he’ll continue to “bring them along.” He said he hopes not to have a similar minute distribution in January or February.

The Thanksgiving break crowd was sparse at Crisler. On television, you could hear the players and coaches much more than typical. That’s no excuse for Michigan’s slow start.

“The Mount,” a Northeast Conference school in Emmitsburg, Maryland, played loose throughout, attempting several shots you’d more commonly see on the playground. Junior Robinson was the star for the Mountaineers. The smallest player in Division I at 5-foot-5, Robinson’s quickness and long-range shooting gave Michigan problems. He finished with 21 points, shooting 3-of-8 from two and 5-of-6 from three, including one from right in front of where the head coach sits on the bench.

“It was shades of New Jersey Tech where one guy can just make miraculous shots and keep them in the game,” Beilein said. “They were a bigger challenge for us than you’d think.”

Beilein said he thinks being 5-foot-5 and not, say, six inches taller, is beneficial, as you have a low dribble and can get underneath defenders. Michigan needed to adapt to seeing Robinson, who Beilein compared to Spud Webb, live.

Offensively, the Wolverines shot well from beyond the arc (11 for 27; 40 percent) but it is somewhat troubling they only attempted six free throws — and two of those were because of a late technical foul. Granted, the Mountaineers shot just five free throws. The Wolverines grabbed 11 offensive rebounds (they missed 31 shots) and allowed the Mountaineers to grab just three of their 30 misses.

Duncan Robinson played 23 minutes off the bench and used his shot fake more than we’ve typically seen. He hit 2-of-5 from deep and 1-of-4 from inside the arc, finishing with eight points. Wagner hit three triples and took his man off the bounce a few times. DJ Wilson wasn’t as big a factor as he’s been previously this season; he played just 17 minutes, partly because he picked up two fouls in the game’s first five minutes.

Michigan faces what figures to be a much stiffer test on Wednesday, when it hosts Virginia Tech in the Big Ten-ACC Challenge.