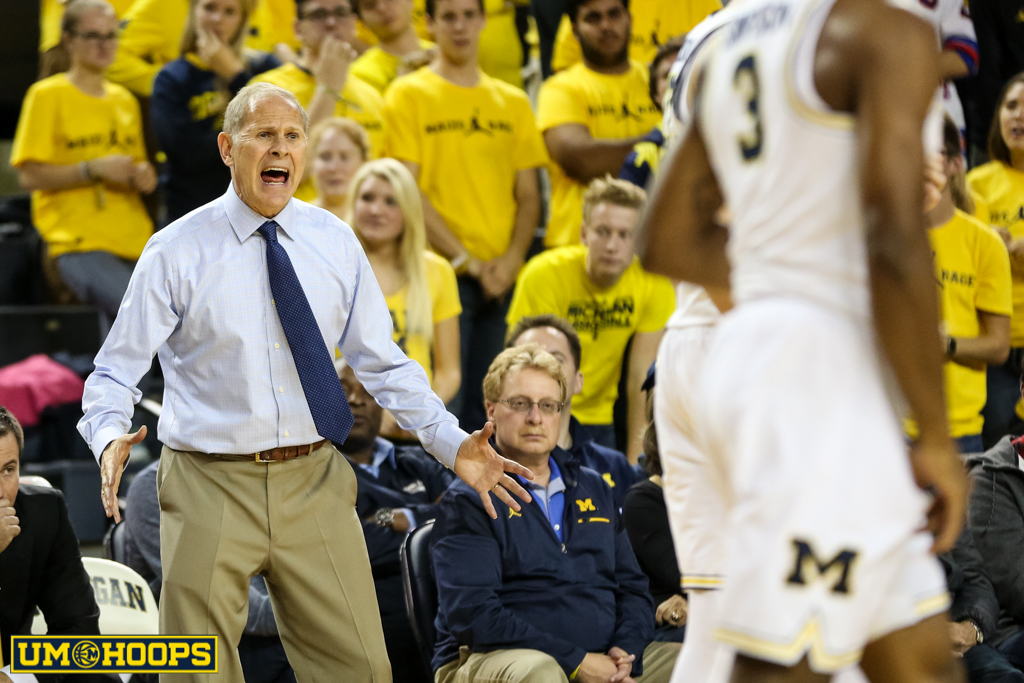 When Michigan plays Virginia Tech Wednesday in the ACC-Big Ten Challenge, transition defense will be critical. Offensively, look for the Wolverines to feed the post more.

Michigan plays Virginia Tech Wednesday night at Crisler Center (7 p.m. ET, ESPN2). The Wolverines bounced back from a loss to South Carolina with a win Saturday, but the Hokies will provide a much stiffer test than Mount St. Mary’s.

“The ball will come through the basket and be pushed up the floor right down our throat,” John Beilein said. “If our transition defense isn’t good, they’ll get 80 [points] on us. Whether we score or miss, we’ll have to get back.”

While he said it’s the first time this season Michigan has played a team that runs like this, Indiana has similar tendencies, so at least the veteran players will be familiar. Writing for the Virginia Tech blog The Key Play, Brian Marcolini highlighted the team’s ability to run even after a made basket. “Keep your eye on [sophomore point guard Justin] Robinson as he gathers an inbounds pass off his own baseline. His head is immediately up and looking for anyone he can quickly toss it to in transition.”

Chris Clarke is often the beneficiary of those passes, and Beilein singled out the 6’6”, 210-pound sophomore as someone with both power and finesse. Beilein said he may be a difficult match-up for anyone on Michigan’s roster other than DJ Wilson.

The Hokies push the ball on 23% of their offensive possessions, per Synergy, and junior forward Ahmed Hill also needs to be accounted for as a transition threat both at the rim and the three-point line.

Look for Michigan to get the ball to its bigs in the post more often in the next few games. After watching tape, the coaches have pointed out the times when post players are wide open and don’t receive the ball.

“We’ve always talked about it but it hasn’t really gotten done,” Zak Irvin said in regards to feeding the post. “There’s more of an emphasis on it this year. Our bigs are playing well for us right now so why not feed them the ball?”

Irvin noted the many advantages of doing so besides the recipient scoring, such as drawing fouls that get Michigan to the bonus quicker and the bigs kicking the ball back out for threes.

Virginia Tech ranks 127th in two-point defense, allowing opponents to shoot 46.7 percent from inside the arc. Expect Michigan to take more chances getting the ball inside tomorrow and beyond.

It doesn’t appear the ACC-Big Ten Challenge, which started in 1999, means all that much to the players, at least not to seniors Irvin or Derrick Walton. There is some conference pride, but they’re not closely following the results.

The games still provide quality non-conference games, but because of league expansion they lack some of the excitement of earlier Challenges. The fact that Maryland has played on both sides of the Challenge says a lot.

Anyway, the ACC won the first 10 Challenges but none since (2012 and 2013 were ties). In other words, the Big Ten is “hot.” The leagues split the first two games, on Monday. There are six more games tonight, including Syracuse at Wisconsin and Michigan State at Duke, before it concludes tomorrow night (Purdue at Louisville and North Carolina at Indiana are two of the juicier match-ups).

Michigan is 7-8 all time in the Challenge and has won its last two games (at NC State and vs. Syracuse). The Wolverines have never faced Virginia Tech in the Big Ten-ACC Challenge.