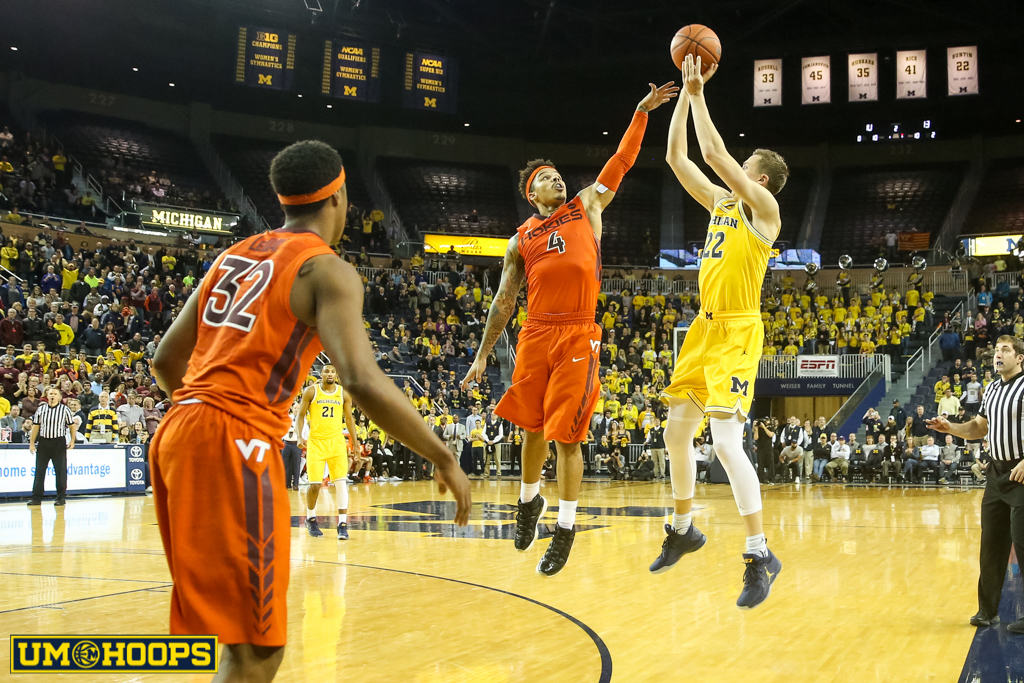 Michigan fell apart down the stretch in a tough loss to Virginia Tech. What happened?

“Thank goodness in the time I’ve been coaching I haven’t seen too many games like that where we lead the whole game and can’t make enough stops or finishes offensively to win the game.”

Michigan led by as many as 15 in the first half and by 10 with eight minutes left, at which point KenPom.com gave the Wolverines a 96 percent chance of winning. Virginia Tech’s first lead came with 1:50 left in the game. Final score: Virginia Tech 73, Michigan 70.

There was not one obvious blunder that cost Michigan the game. It was a combination of little things. DJ Wilson picked up his fourth foul and, with three minutes left, his fifth, which hurt Michigan defensively. Derrick Walton missed the front end of a one-and-one (which led to Wilson’s fourth foul). Beilein was out of timeouts when he could have used one.

Defensively, Beilein said Michigan was doing some “strange things” down the stretch. The Hokies first lead, 68-67, came on Seth Allen’s coast-to-coast drive in which he snuck past Muhammad-Ali Abdur-Rahkman. Beilein called Michigan’s second-to-last timeout after the basket, and Abdur-Rahkman got a good look but missed a jumper just inside the foul line. On Tech’s ensuing possession, miscommunication on the defensive end allowed an open three for Allen.

“It was a dribble hand-off, some guy assumed there was a switch coming. We just stopped on the play,” Beilein said. “Another time in the post, I don’t know what we were doing. They just threw it in and scored. We didn’t even know where our post was. It’s stuff we need to get better at. Sometimes we just lose that edge, where you’ve got to get a stop. We lose that edge to get a stop. We’ve got to be a better defensive team than that.”

It’s exactly what Michigan preached in the offseason and, before last night, it seemed like the transformation was real. Virginia Tech coach Buzz Williams said the defensive numbers he looked at prove Michigan has improved on that end and praised Billy Donlon’s addition to the staff.

But Michigan had defensive breakdowns when it counted the most. “We weren’t hard to play against down the stretch,” Duncan Robinson said. Added Zak Irvin: “They were doing anything they wanted, especially late in the game.”

Irvin scored a game-high 23 points (7-of-12 from two; 3-of-8 from deep) but missed his two attempts in the final minute. He tried to answer Allen’s three but shot an air-ball. Abdur-Rahkman saved it and Robinson canned a triple to cut the deficit to one, after which Michigan took its final timeout.

The Wolverines got the ball back with 30 seconds, still down 71-70. Irvin got the ball with 18 seconds left and never took his eyes off the basket, dribbling around the perimeter, denying a screen from Moritz Wagner before using one to get a switch. He tried a fade-away jumper that missed short and was knocked out of bounds with 4.9 seconds left.

“We know what to do when they take him away and we didn’t do it. It’s that simple.”

“I didn’t get to call timeout there,” Beilein said. “We were trying to isolate [Irvin], and they took him away a little bit, and we know what to do when they take him away and we didn’t do it. It’s that simple. So now we got isolated, we got all gumped up there, we couldn’t call a timeout, and we got a bad shot. And we wanted to get some other action on that play. They took a little bit away, but not enough. We have a great counter for that, and we didn’t do it…I wish we had a timeout to put something together.”

There was little doubt in Crisler that Irvin would take the shot. Irvin said he initially tried to drive, in the hopes of drawing a foul, but was cut off. He was asked if he made up his mind, while dribbling, that he was going to shoot.

“Yeah. My teammates believe in me. I like to take the big shot. I’ve proven that in the past that I want the ball in my hands at the end of the game.”

While the deep, contested two is not en vogue, Irvin likes the shot. And again, he was a big-time scorer for Michigan on Wednesday night.

“That’s part of my game. I showed throughout the game I was able to make that shot. It was there all night. Late shot clock or end of game, you’re going to go to what you know. That’s my bread and butter.”

The day before the game, Beilein had said he is fine with Irvin having the ball in key moments but making the right play doesn’t always mean taking the shot. “I love Zak’s courage but that can also be your enemy,” he’d said.

Michigan received two “free” timeouts on replay reviews and got one final chance, with 3.7 seconds left, taking the ball out from midcourt down three. Abdur-Rahkman floated a pass to Wagner, who made a nice touch-pass to Robinson. The sharpshooter pump-faked but, not realizing how much time he had, didn’t allow the defender to land before hoisting the three.

Robinson said the loss would be “tough to stomach.” Irvin said, “This one’s going to haunt us.” Beilein was more direct: “We didn’t deserve to win the game the way we played in those last ten minutes.”