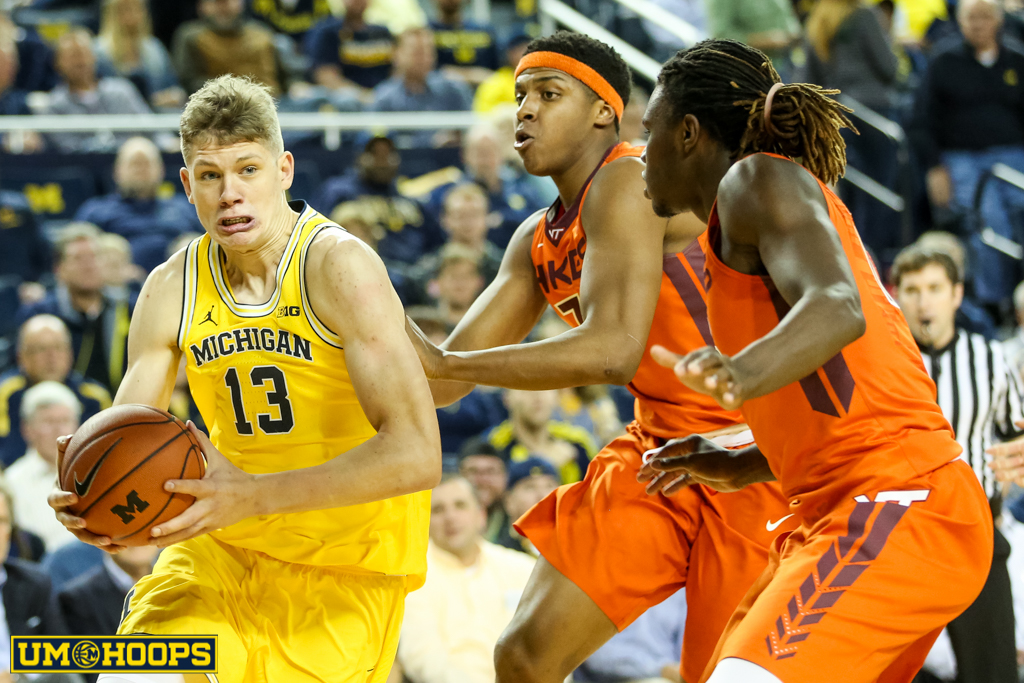 Without the early second-half efforts of Moritz Wagner, it was entirely possible the Wolverines would’ve been trailing much earlier.

After leading for more than 38 minutes, the Michigan basketball team coughed up its lead late in the second half to lose in heart-breaking fashion against Virginia Tech, 73-70.

Without the early second-half efforts of Moritz Wagner, though, it was entirely possible the Wolverines would’ve been trailing much earlier.

The sophomore forward was the only source of Michigan offense for the first six minutes of the second half. After the Wolverines jumped out to a nine-point halftime lead behind hot shooting — in particular from Zak Irvin — it was Wagner who took his turn carrying the load.

Wagner’s first basket came after a two quick baskets by the Hokies cut Michigan’s lead to five. He received the ball with his back to the basket, before pivoting quickly and spinning past his defender to lay it in with his left hand.

A minute-and-a-half later, the Wolverines’ lead had shrunk to two, but Wagner was there to respond. In what has become a common sight, the sophomore ripped through the lane, blowing past defenders for another off-hand layup.

Then, after Virginia Tech’s Zach LeDay cut the Michigan lead to two once again, Wagner countered, laying it in after diving to the basket and receiving a pass from Derrick Walton.

Michigan coach John Beilein said recently that Wagner’s improved perimeter shooting has opened things up for him on the court, and that sure seemed to be the case against the Hokies.

“(Wagner) was actually surprising off the bounce,” LeDay said after the game. “We knew he was a shooter, we knew he could roll to the basket and finish but we didn’t know he was off the bounce like that.”

“We knew he was a shooter, we knew he could roll to the basket and finish but we didn’t know he was off the bounce like that.”

But despite the success in attacking the Virginia Tech big men during that personal 6-0 run, Wagner was quiet the rest of the way, going scoreless after a free throw with 12:24 left. He would finish the game with 11 points on 5-6 shooting, his third-highest point total this season.

It was yet another game in which Michigan’s starting ‘5’ failed to play over 20 minutes — he’s only gone over that mark once, against Mount St. Mary’s last Saturday — though the reasoning this time may have been impacted by factors beyond his control.

Wagner has been subbed out early and often this season, usually after committing a quick foul to start the game, but there was no such case against the Hokies. Wednesday, the starter in foul trouble just so happened to be DJ Wilson, who played just 11 minutes and eventually fouled out.

Wilson’s length, athleticism and instincts help make up for any of Wagner’s shortcomings on defense, part of the reason why the two have seen the floor together often this year.

Without his normal frontcourt partner, though, Wagner was left to defend against the quicker and smaller Hokies with mostly Duncan Robinson at the ‘4’ and the trio of Walton, Irvin and Muhammad-Ali Abdur-Rahkman in the backcourt.

And with Michigan simply looking for stops against Virginia Tech in the second half, that may have been the nail in the coffin for Wagner’s playing time (it certainly didn’t help that Wagner was dealing with an illness all day, either).

“Scoring points wasn’t as big as trying to stop them,” Beilein said after the game. “Right now, Mark’s a better defender. In defense of Mo, Mo’s been sick all day, didn’t feel good. He was doing alright taking the ball to the basket.

“We drew him up (a play) at the end, that’s where the walk call was … Huge call in the game, when he walked (while) driving down the lane. We were trying to drive their big right to the basket like we did a couple of times. Unfortunately, that was a walk call and a huge turnover in the game.”

Wagner should have no trouble recovering from his illness. The harder task will be earning the trust of his coach on defense, in addition to cutting out the quick foul problems that have plagued him early in games this year. But if Wagner improves quickly enough in those areas, his playing time could spike.

After all, the Wolverines — and now LeDay and Virginia Tech — already know just how dangerous their ‘5’ can be on offense.