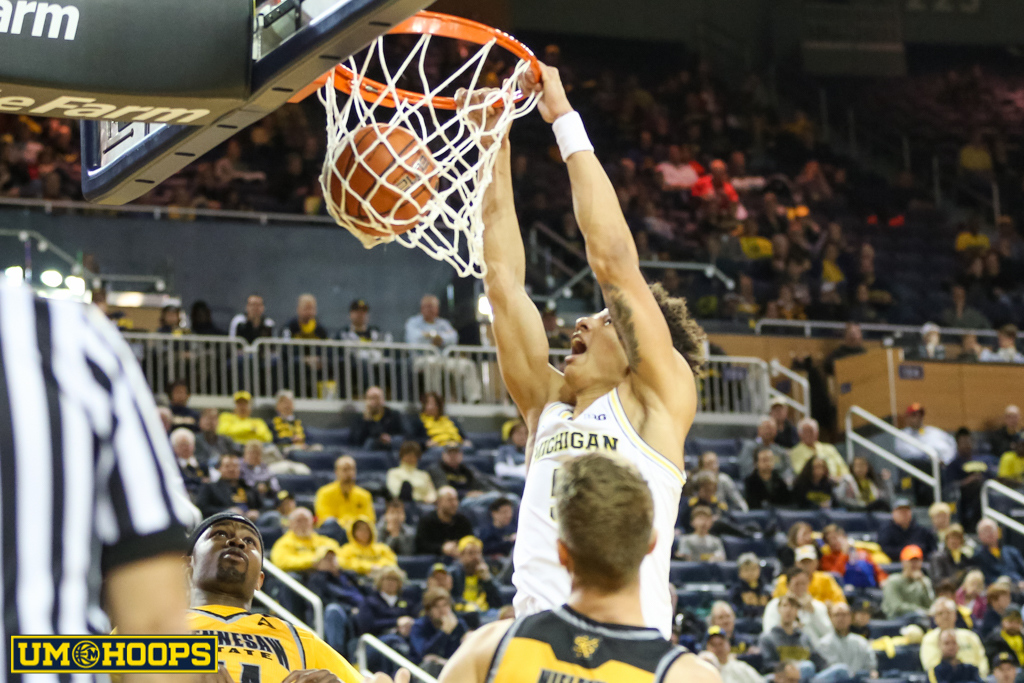 The dunk put the exclamation point on what was a triumphant bounce-back game for Wilson — he tallied a double-double with 15 points on 7-11 shooting and 11 rebounds while displaying his tantalizing potential as a season-changing ‘4’ for the Wolverines.

DJ Wilson had made a concerted effort in the first half to be careful on the offensive glass. Picking up early fouls, after all, is the easiest way to find the bench under John Beilein, and he had fouled out in 11 minutes of playing time against Virginia Tech just three days earlier.

But with Michigan leading Kennesaw State by 23 points near the midway point of the second half, Wilson threw caution to the wind. As a shot from Muhammad-Ali Abdur-Rahkman clanged off the glass, Wilson slipped past any and all box-out attempts, timed his jump and rose above the floor for a vicious putback slam.

The dunk put the exclamation point on what was a triumphant bounce-back game for Wilson — he tallied a double-double with 15 points on 7-11 shooting and 11 rebounds while displaying his tantalizing potential as a season-changing ‘4’ for the Wolverines.

After back-to-back breakout games at Madison Square Garden against Marquette and Southern Methodist, Wilson struggled through three consecutive rocky outings, dimming some of the luster from his New York performance. South Carolina’s length and athleticism proved to be a difficult challenge, while Wilson simply couldn’t stay on the floor against Mount St. Mary’s and Virginia Tech — he played as much against Kennesaw State (28 minutes) as he did against the Mountaineers and Hokies combined.

So Saturday’s game, in which Wilson combined with frontcourt partner Moritz Wagner for a lethally efficient 35 points, was a step back in the right direction, both for Wilson and Michigan.

“With our skillsets and how versatile we are and our length on defense, I think that we really have a big impact on the game,” Wilson said. “And these past few games, either one of us has been in foul trouble, so we haven’t able to be on the court at the same time. So I think it was a big help for us today.”

After his team’s demoralizing loss to the Hokies, Wilson went right back to work in the gym, playing most of a 40-minute scrimmage that Michigan dubs the ‘All-Star Game.’ It was a move that Beilein saw as necessary.

“He needed to go out there and go through the ups and downs and feel good about himself … He’s never had it,” Beilein said. “It’s been basically, ‘I want a chance, I want a chance. When am I going to get my chance?’ Every chance is not going to be a bowl of cherries. And you have to be able to deal with it.

“I think that foul trouble really bothered him the other day, and it affected our team. I think it’s a different game if maybe he’s out there defensively in the last four minutes of each half … It’s about the whole team. We can play differently (with Wilson on the floor).The ebbs and flows are still going to be difficult for him. He’s going to miss big shots, he’s going to miss foul shots. It’s all part of it.”

Defense has been a point of emphasis for this Michigan team — perhaps more so than in previous years. And while that process is clearly still in a transitory period, one thing is apparent: Wilson’s development will be crucial to just how well the Wolverines can defend other teams. The 6-foot-11 forward has the ability to alter shots in ways that most, if not all, of his teammates cannot, and after taking his bumps and bruises through his first two seasons in Ann Arbor, Wilson has also emerged as a dependable and tenacious rebounder.

There are still areas of improvement. Developing a more consistent 3-point shot — Wilson is shooting 29 percent from behind the arc — would allow Michigan to space the floor even better and open up more possibilities for the offense, and there is still that nagging problem of avoiding early foul trouble.

But this version of Wilson is still one that Michigan will gladly take, and Wilson has happily accepted the added responsibility placed upon him.

“I’d rather have this than what happened last year as far as my role on the team,” Wilson said. “I can’t complain. I try to bring as much energy as I can.”

Added Beilein: “We’re going to play a lot better teams than Kennesaw is right now. At the same time, for him to go in there to get whatever double-double he had there, it’s just good that he’s mixing it up. That was not happening a couple years ago, he was just drifting to the (3-point line). There’s this great body that we’re working at, and fundamentally, he’s just working to have great balance in what he does.”