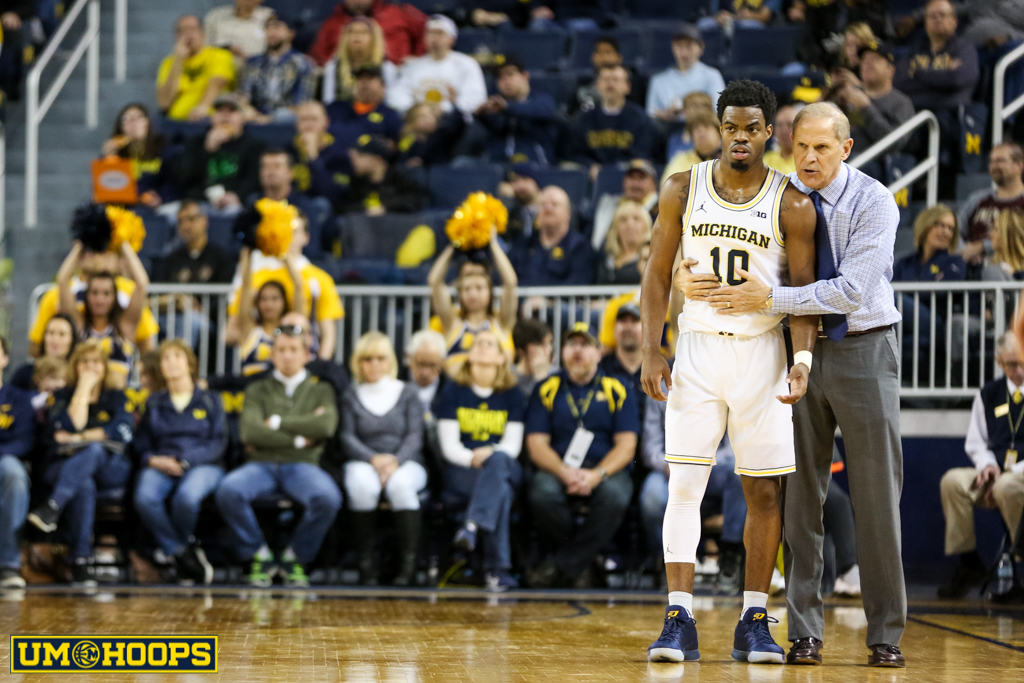 Even considering the opponent, it was encouraging to see Michigan lock down defensively after an opposing guard got hot.

After a dispiriting loss to Virginia Tech, this was the kind of performance Michigan needed. Yes, Kennesaw State was picked to finish near the bottom of a one-bid league. If the Wolverines had struggled, particularly on defense, it would have been a bad sign. They didn’t, winning 82-55.

Redshirt senior Kendrick Ray was on fire to start the game. This was nothing new. In Michigan’s four games against low/mid-major competition this season, an opposing guard has put up big numbers in three of them: IUPUI’s Darrell Combs (scored 22 of his team’s 65 points), Mount St. Mary’s Junior Robinson (21 of 47), and now Ray, who poured in 24 of Kennesaw’s 55.

The difference yesterday was that Michigan clamped down on Ray after the first 15 minutes. He drained his third three, in four attempts, with 5:38 left in the first half, upping his total at the time to 15 points. Michigan didn’t allow him to take another shot the rest of the half and forced him into three turnovers as the Wolverines went on a 17-2 run. In the second half, Ray was 1/3 from deep and 3/7 inside the arc, with one of those baskets coming in transition after a steal and two more after Michigan’s starters had been pulled. He finished with seven turnovers and just one assist.

John Beilein said after the Virginia Tech loss he wanted to see more edge, more determination, more grit on the defensive end. Derrick Walton showed it over the final 25 minutes. Realizing that Ray was hitting everything — deep threes, contested step-backs — he locked in even more, saying after the game he takes such challenges personally.

It would be easy, and perhaps not wrong, to lose team defensive principles when one guy is lighting it up. Walton said that was not the case on Saturday. He upped his aggressiveness and Michigan pressured Ray higher outside the three-point line and gapped him when he drove.

Beilein is hoping Walton is not the only potential stopper on this team. He singled out Muhammad-Ali Abdur-Rahkman as well.

“The best thing that he can do right now is become a really good defender; just an outstanding defender. With his athleticism he can, we’ve just got to get that mindset so that is how he identifies himself.”

Abdur-Rahkman struggled with his shot (0/5 from the field) but tallied three assists and two boards while playing effective defense.

It will take a team effort this coming week. Texas, which comes to Crisler on Tuesday, will present a much bigger challenge in the paint than Kennesaw. Saturday’s opponent, UCLA, is currently ranked fifth in KenPom.com’s adjusted offensive efficiency and first in effective field goal percentage. The Bruins dropped 97 points on Kentucky at Rupp Arena yesterday. The Wolverines will have to play hard and smart defense for much closer to 40 minutes if they want the same result as Saturday.

Through eight games, seniors Walton and Zak Irvin are leading Michigan with 33.4 minutes per game. Don’t expect that to change. In the pre-season, there was a lot of talk about limiting their minutes. For what it’s worth, Walton missed time the last two seasons because of foot/ankle injuries and Irvin had back surgery in the summer of 2015.

Beilein’s take on minutes has varied throughout the season. He has said he prefers his top guys stay within the 32-35 minutes range. Yesterday, Walton played 31 and Irvin 32. Given the score margin, they could have played less. But will a few minutes less in this game better allow them to be pushed in a future game? It’s an inexact science.

Walton and Irvin say they are fine playing as much as needed, but no player has ever said he prefers fewer minutes. Beilein, at times, has said he favors an eight-man rotation because it allows players breathers but also keeps them in rhythm. The best teams he’s coached and faced have used eight guys. Yesterday, he referenced Duke and Notre Dame as teams that, over the years, have had guys play 38-40 minutes.

In the end, it is fairly simple, regardless of what anyone says: Walton and Irvin are critical to this team and will play as much as needed, especially if freshmen back-ups Xavier Simpson and Ibi Watson are not ready for serious game action.

“As you know, I don’t trust many leads,” Beilein said when asked about yesterday’s minutes distribution. “It ain’t over till it’s over.”