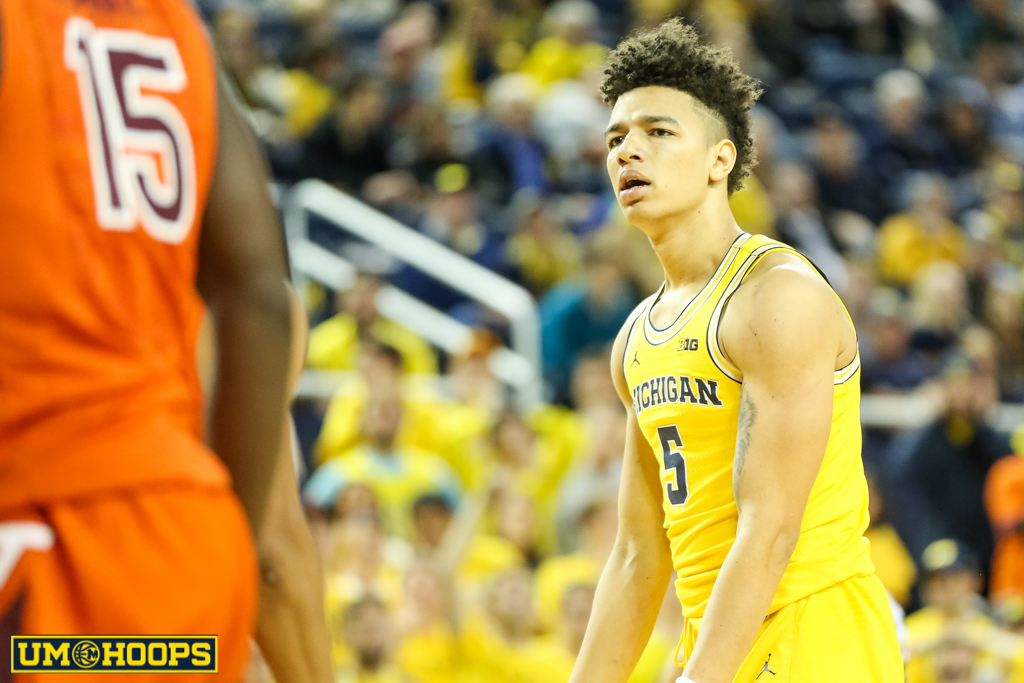 With preseason tournaments and the Big Ten/ACC Challenge in the books, here’s non-conference version of our Big Ten Power Rankings.

Wisconsin has dropped a couple of games, but the Badgers had a great week with wins over Syracuse and Oklahoma. Ethan Happ has been dominant, Nigel Hayes has been more efficient than his junior season and Bronson Koenig is also off to a hot start.

Hayes flirted with a triple-double against Syracuse, putting together a clinic on how to pick apart Jim Boeheim’s 2-3 zone. Hayes finished with 9 points, 10 assists and 11 rebounds, missing a late free throw that would have secured the triple double. Watch Hayes go to work in the middle of the zone en route to all 10 assists here.

Indiana might have lost at IPFW, but the Hoosiers also have two of the Big Ten’s best wins: Kansas in Hawaii and North Carolina in Assembly Hall. The Hoosiers shoot the ball like an elite team and are the fourth-best offensive rebounding team in the country, but turnovers are becoming a major red flag.

Indiana turns the ball over too often and it doesn’t force many turnovers. Only Michigan State has given up more possessions due to turnovers on both sides of the ball than the Hoosiers to this point.

We’ve spent so much time touting Purdue’s ability to play in the low post over the last few years, but now we have a Boilermaker team that can still post you up, but also hit the three. To this point, this is Matt Painter’s most three-point happy team ever in West Lafayette.

The Boilermakers are attempting 42.5% of their shots from three-point range, well above the previous high of 37.7% under Painter. The good news? Purdue isn’t just taking more threes, it is making them. The Boilermakers’ 43.3% three-point shooting percentage ranks 5th nationally and leads the Big Ten.

According to data from Synergy Sports, Ohio State has one of the best transition offenses in the Big Ten. The Buckeyes don’t run quite as often as some Big Ten teams, but they are also much more effective than those transition-heavy groups.

With so many versatile and athletic wings, it makes sense that the Buckeyes are a good transition team and I’d expect Thad Matta’s team to continue to push the pace moving forward.

December should tell us more about a Virginia team that let a win slip away at Virginia and hasn’t played many other quality opponents. The Buckeyes will have a big game against UCLA on December 17th in Las Vegas.

Michigan continues to ride the roller coaster that is Zak Irvin. In his best moments he can win the Wolverines game with his scoring power, but his consistency continues to confound.

Irvin has attempted more off-the-dribble jump shots than anyone else in the Big Ten, but has just a 41 eFG% on those shots. He’s shown new dimensions of his game — including the ability to attack the basket — but the Wolverines need him to be more consistent to contend near the top of the Big Ten.

Tom Izzo has turned around his fair share of teams with November and December struggles, but this Michigan State team has a long way to go. Yes, the travel schedule was ridiculous and Michigan State has faced a difficult schedule (the 8th toughest per KenPom). But the Spartans are just 5-4 and only beat Oral Roberts by 4 points at home on Saturday night in a game that was neck-and-neck. That’s the same Oral Roberts team that lost by almost 30 points at Oakland and hasn’t beaten a Division I team.

I think the Miles Bridges injury — he’s out a couple weeks — really hurts the Spartans because the next month or so is when this team will come together.  Tom Izzo’s best players are his freshmen and he needs them to mature and gel. Nick Ward is one of the best post-up scorers in the Big Ten, Cassius Winston has the No. 3 assist rate in the country (but turns the ball over too often) and Josh Langford oozes raw talent.

Of the freshmen, Bridges is in street clothes and the other four are still coming off the bench. I’d expect to see most of them in the starting lineup by the time conference play rolls around and a few December tune ups should be critical.

6-foot-7 sophomore Vic Law has been a breakout player for the Wildcats this season. Law has more than doubled his scoring average from 7 to 16.1 points per game and he’s shooting 53% on twos and 54% on threes out of the gate. Law entered Northwestern as a top-100 recruit, was solid as a freshman and then lost his sophomore season to a torn labrum. He’s not going to shoot 54% on threes all season, but he has the ability to elevate Northwestern’s ceiling.

The Terps are 8-1, but it hasn’t come without some teeth gnashing. Maryland has already won six games by single digits and/or in overtime against good teams (Kansas State, Oklahoma State, Georgetown), bad teams (American) and everything in between (Towson, Richmond). The Terps have only played two Division I games decided by double-digits: a 14-point home loss to Pittsburgh and a 14-point win over Stony Brook.

Richard Pitino appears to have a much-improved team on his hands and the gains have come on the defensive end of the floor. After fielding one of the worst defenses in the Big Ten in back-to-back years, the Gophers now rank in the top-ten nationally in eFG% defense. Teams are shooting just 39.5% on twos and 28.7% on threes against Minnesota this season.

Illinois State transfer Reggie Lynch has made a significant difference in the middle. The 6-foot-10, 260 pound junior posted the best block rate in the country in his first two seasons at Illinois State and and is ranked 2nd in that metric this season, blocking 25 shots in 7 games.

Illinois had a great week and knocked off NC State at home and VCU in Miami to bounce back from a tough Thanksgiving week that featured losses to Winthrop, West Virginia and Florida State. It’s hard to tell what to make of the Illini right now as they are ranked 94th or worse in the four factors stats on both sides of the ball. They might not have any glaring weaknesses, but where are they going to excel?

I think most had pretty much written off Nebraska after losing Andrew White III to Syracuse, but the Cornhuskers have exceeded expectations early on. They dropped three in a row to UCLA, Virginia Tech and Clemson — all away from home — but did manage to knock off Dayton in California. The Nebraska schedule isn’t going to lighten up either with Creighton and Kansas on the schedule this week.

The Nittany Lions dropped a disappointing game at home to open the season against Albany, but have held serve since then in terms of expected wins. They’ve beaten who they should beat and lost games to Duke and Cincinnati on neutral floors. The last chance for Pat Chambers’ team to pick up a quality win will be against Pittsburgh on Saturday.

Iowa has lost 4 in a row with its most recent loss at home to Nebraska Omaha. Peter Jok can score 30 every night but it won’t matter if the Hawkeyes can’t defend. Iowa is ranked 180th nationally and last in the Big Ten in adjusted defensive efficiency.

Rutgers hasn’t beaten a team ranked better than 191st in KenPom (DePaul), but it does have 7 wins or as many as it managed last season. The Scarlet Knights are still one of the worst shooting teams in the country (they’ve only made 26% of their threes), but they are the best offensive rebounding team in the country and grab 46% of their missed shots.