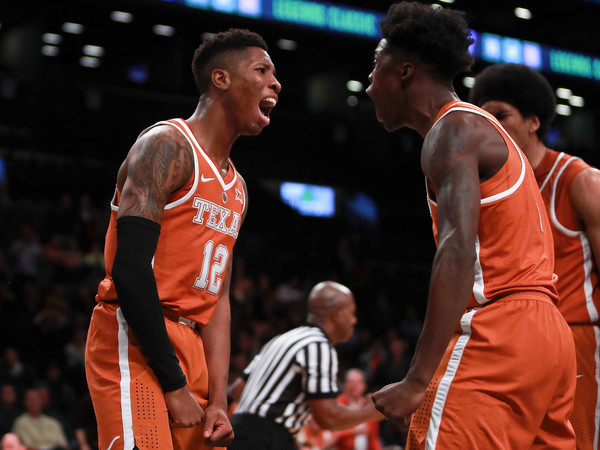 There’s no such thing as a must win game in December, but after dropping two games in November and with a trip to No. 2 ranked UCLA on the horizon it sure feels like Michigan needs to defend home court against a slumping Texas team tonight.

There’s no such thing as a must win game in December, but after dropping two games in November and with a trip to No. 2 ranked UCLA on the horizon it sure feels like Michigan needs to defend home court against a slumping Texas team tonight.

The Longhorns opened the season in the top-25, but lost three consecutive games to Northwestern (44 KenPom), Colorado (52 KenPom) and Texas Arlington (73 KenPom) before putting together a come back win against Alabama (79 KenPom) at home last Friday. Texas is now the lowest ranked team in a loaded Big 12, a conference that can make strong a case for being the best league in basketball, and will be desperate to turn its season around at Michigan.

John Beilein has had great success against Shaka Smart over the years as the Wolverines blew out Smart’s VCU team in the 2013 NCAA Tournament and handled Texas in the Battle 4 Atlantis last season.

Manufacturing points has been a struggle for Texas this season as Shaka Smart’s team has searched for steady point guard play. In its three game November losing streak, the Longhorns only managed .87 points per possession before bouncing back with a better showing in a comeback win over Alabama.

Only one high-major team (Miami) has assisted on a smaller portion of its made field goals this season. The Texas offense hasn’t moved the ball well and just can’t shoot it very well, especially from distance. Texas is shooting just 27% from three (340th) and 52.3% from two (87th) for a 48.1 eFG% (244th). Per Synergy, the Longhorns rank in the bottom 20% of Division I teams in both catch-and-shoot and off the dribble shooting this season.

This isn’t a vintage Shaka Smart defense either. The Longhorns are forcing turnovers on just 18.1% of their opponents’ possessions (235th). That’s a long way from Smart’s vintage ‘Havoc’ teams which ranked first nationally in forced turnover rate for three consecutive seasons at VCU. Knowing that he might not have the personnel for his favored defensive approach, Texas has played man-to-man defense for 91% of its possessions this season and has only pressed on 9%. (Smart’s 2013 VCU team pressed on 31.4% of its defensive possessions).

While this might not be a typical Smart defense, it still has some formidable strengths. Texas does a great job of keeping teams off the free throw line, defending the three-point line and preventing assisted baskets. Only 40.8% of made field goals against Texas have been assisted, the 11th lowest rate in the country, and teams are shooting just 29.8% from long distance. The Longhorns also grade out in the 93rd percentile defending the pick-and-roll according to Synergy Sports. The Longhorns are also a good shot blocking team, but are a below average defensive rebounding team.

6-foot-7 sophomore Tevin Mack leads the Longhorns in scoring at 14 points per game and earned his first start on Friday. He’s the best three-point shooter on the Texas roster (14-of-32) and he also shoots 55% inside the arc. He’ll split time between the three and four positions and is basically a catch-and-shoot guy from the perimeter who can attack close outs and get to the rim, lacking much of a mid-range or off the dribble game.

6-foot-11 freshman Jarrett Allen was a five-star prospect coming out of high school, but he’s struggled to find his footing early on. Starting every game, Allen does a great job of drawing fouls, finishing around the basket, hitting the offensive glass and blocking shots. The down side? He’s just a 53% shooter at the free throw line.

Shaquille Cleare is a 6-foot-8, 275 pound senior who can bang around, play with his back to the basket and block shots. He’s Allen’s backup, but the two will also play together for stretches. There’s nothing fancy about his game, but he scored 11 points against Alabama, most of which came from a simple half hook on the block.

Freshman point guard Andrew Jones was also a five-star prospect out of high school. He started the season in the starting lineup for the first two games, then was dropped to the bench before recently earning his spot back. He has as many turnovers as assists this season and shoots just 26% from three, but he’s a good athlete who can finish (58% inside the arc) and get to the free throw line.

6-foot-4 guard Kerwin Roach has had to take on additional point guard duties as Jones has taken time to adjust. is also trying to grow into those playmaker roles, but he’s an elite athlete who can get to the rim. He can’t shoot the three (2-of-13), but it’s important to keep him off the free throw line. He attempted 16 free throws in the Longhorns’ comeback win over Alabama last week.

Michigan native Eric Davis has struggled with his shot early on this season. He’s only 6-of-37 (16%) from long distance and also struggling to finish at the rim. Davis scored 12 points on 6 shots against Michigan last year and is excited to face the Wolverines back in his home state.

6-foot-3 senior Kendal Yancy appears to be more of a glue guy who can defend and hit open shots, but doesn’t use a high volume of UT’s possessions. Yancy is one of only two seniors in the UT rotation, which features 7 freshmen and sophomores.

Freshman guard Jacob Young came off the bench against Alabama and knocked in three triples, but he’s just 7-of-26 from three even after that 3-of-6 night.

The Longhorns have fallen to #71 in KenPom and his metrics have moved Michigan to a 10 point favorite and an 11 point favorite in Las Vegas. KenPom projects a final score of 69-59, giving the Wolverines an 81% chance of moving to 7-2. This feels like one the Wolverines just need to have, but it will be interesting to see how they react to that pressure, especially given last week’s collapse against Virginia Tech.