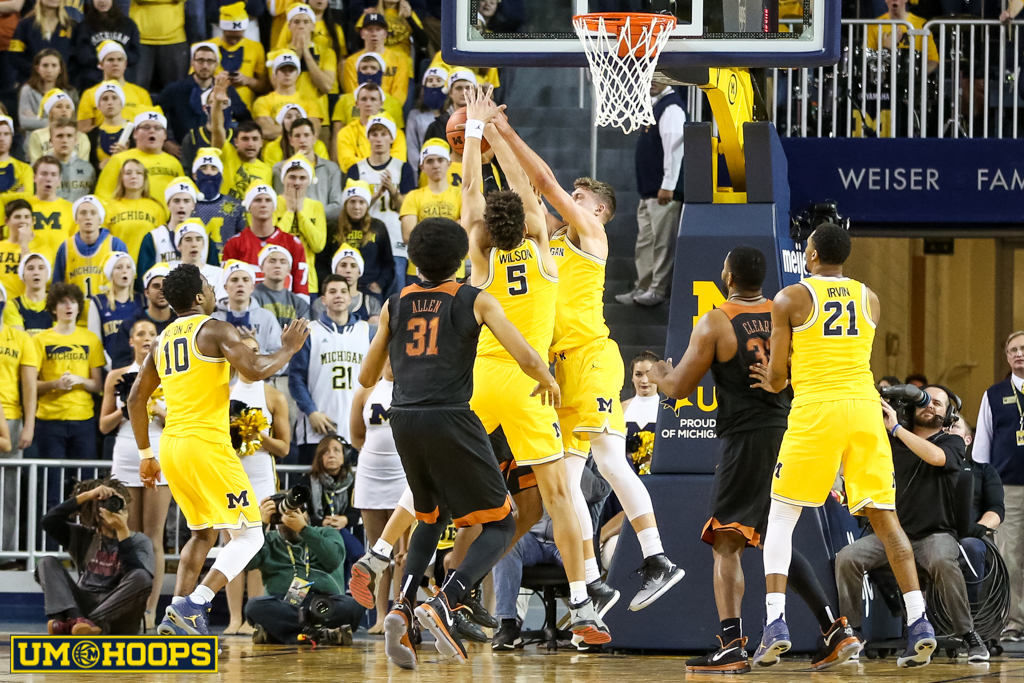 For much of this season, Michigan’s big men have been the stars. That was especially true against Texas, as the backcourt struggled mightily.

When was the last time Michigan regularly played through a big man? Maybe in the 2009-10 season, when forward DeShawn Sims was a senior, but that team ran through Manny Harris.

This year, Michigan is starting to realize that it needs to play through its 6’11” center, Moritz Wagner. Forward DJ Wilson has also been critical. John Beilein’s typical guard-oriented approach has not disappeared, but didn’t work at all last night in a 53-50 win over Texas.

“I was thinking about that today of where we are,” John Beilein said as he acknowledged the shift in playing style.  “Rebuilding, retooling, remodeling, re-everything, with Moe’s emergence right now — he’s a long ways away — but it gives us another way to play.”

“I thought Wagner was terrific,” Texas head coach Shaka Smart said after the game. “I thought he was the best player on the floor today.”

Praise from opposing coaches has been a running theme for Wagner this season. One lost sleep after seeing on tape how well Wagner had played in a previous game. Another said he could be a pro.

“I thought he was the best player on the floor today.”

Wagner was a point guard when he first started playing basketball, and those skills showed against Texas. He got the vibe that his teammates weren’t attacking offensively, so he did, often catching the ball on the perimeter and driving past his man. He converted 7-of-10 two-point shots. His put-back after an offensive rebound with 20 seconds left was the game-winning basket.

While Wagner couldn’t find his outside shooting touch (0-of-3 from deep to bring his season mark down to 50 percent), Wilson did, burying two corner threes. Both played well on the other end of the floor, too. With Michigan up one in the final seconds, Wilson funneled Texas’ Eric Davis, Jr. towards Wagner, who blocked Davis’ shot.

Beilein said the block, as well as an earlier defensive play by Wagner, would have been fouls on the big man last season, but he’s learning when to leave his feet. A week ago, Wagner found himself on the bench for critical stretches of Michigan’s loss to Virginia Tech because of defensive issues. Now, despite some translation issues in between the coaches and the German-born Wagner in the huddle, Beilein is pleased with his defensive development.

“I was shocked,” Beilein said of Wagner’s defense. “When I wanted to make a defensive substitution at the end and put Mark in for Moe, Billy said ‘No, Moe is really hedging the ball screen well.’ So we stayed with him down the stretch.”

The move paid off as Wagner came through with the winning plays.

“Most of the time I know where I am, but the coaches want me to be somewhere else,” Wagner said with a smile when asked about his defensive court awareness.

The frontcourt play was critical given the guards’ struggles.

Speaking of Walton and Irvin, the senior captains, Beilein said, “They’re so much better than that. Derrick’s trying to shoot over length when he can [instead] drive and find people. Zak, there was nothing about his game except that three-pointer.” It was Irvin’s lone basket on eight shot attempts.

Abdur-Rahkman hasn’t made a field goal the past two games and has cracked double-digits scoring just once in the past five.

“He’s got to be a better player than he’s playing,” Beilein said. “He’s lost a little confidence right now.” Beilein said Abdur-Rahkman can’t let his offense affect his defense. Regardless, Michigan will continue to explore a bigger lineup with Robinson in his place.

Given their inexperience and skill sets, it’s fair to assume players like Wagner and Wilson have more room to grow than the upperclassmen guard trio of Walton, Irvin, and Abdur-Rahkman. The potential is exciting for the bigs; you pretty much know what you’re going to get from the backcourt.

That doesn’t mean the guards can’t give Michigan more than they have much of this season. They almost certainly will. Walton and Irvin are both capable of efficient, 20-point games. For stretches last year, especially late in the season, Abdur-Rahkman was the guy to score off the dribble when Michigan needed a basket.

Michigan is relying on its big men more so than in the recent past. When that’s not, like last night, out of necessity, the Wolverines will become a more dangerous team.