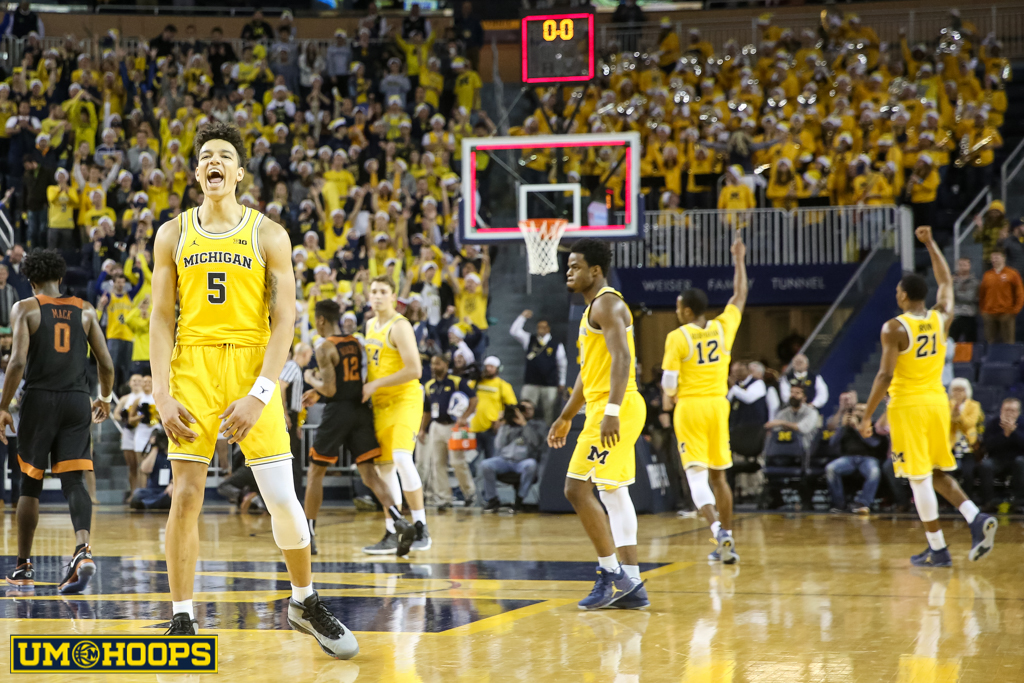 As the Longhorns turned the ball over again and again, it seemed the Wolverines were equally determined to give Texas every chance to walk out of Crisler Center with a win.

Everyone in the building was likely thinking the same thing.

How was Michigan, only one week after a crushing loss against Virginia Tech, going to blow another game? And, especially, how was it going to happen against a Texas team that couldn’t stop shooting itself in the foot?

As the Longhorns turned the ball over again and again, it seemed the Wolverines were equally determined to give Texas every chance to walk out of Crisler Center with a win.

An early 10-point lead was erased after Michigan’s careless play to end the half gave Texas forward Tevin Mack space to shoot. Then, the Wolverine offense went cold in the second half. There were four stretches of three minutes or more where they went without a single point. It was ugly, even cringe-worthy, basketball — the type that will be broken down and analyzed in film session as an example of what not to do.

A loss Tuesday night would’ve erased the last of the goodwill the Wolverines had built up earlier in the season with dominating victories over Marquette and Southern Methodist. And with the way this team has wilted late in games in the past — some might remember how last year’s season ended when Michigan couldn’t hold onto a lead against Notre Dame in March — many in the crowd were probably expecting more of the same.

After all, despite John Beilein stressing that he needed better play from his team at the end of each half, Michigan allowed Texas to go on a 12-5 run to end the first half and claw itself back into the game. The message, it appeared, had yet to get through to his team.

Fast forward to the endgame, and all of a sudden, Michigan was staring at a 2-point deficit with 1:56 left. The Wolverines had managed to retake the lead and tie the game multiple times, only to allow the Longhorns to do the same.

So what was it going to be? More of the same, or something new?

Michigan, behind as clutch a late game performance as you’ll see from Moritz Wagner, chose the latter.

The sophomore forward started off by splitting a one-and-one. Then, with just 16 seconds left and his team still down by one, he swooped in behind Zak Irvin’s missed layup, plucked the ball out of the air and laid it gently off the backboard and into the net to give his team the lead and send the crowd into a frenzy.

But his most impressive play down the stretch came on the other end of the floor. Texas got the look it wanted, forcing a switch from Michigan so that DJ Wilson was guarding Eric Davis Jr. as he received the ball off an inbounds play.

Davis thought he was open. Wilson scrambled to get in position as Davis drove into the lane. And then Wagner left his man to help. He blocked off Davis’s path into the paint, and when the Texas guard threw up a shot in desperation, Wagner was there to swat it into the hands of his teammate .

It was unexpected that the game-clinching defensive play came from Wagner, whose defense has been just about the only thing his coach has criticized early in the season. While Wagner has developed into a dangerous option on offense, his defense has lagged behind, with a slew of mental mistakes and foul trouble following him throughout almost every game.

He was much improved, though, against the Longhorns, so much so that Shaka Smart commended his post defense after the game and called him the “best player on the floor.”

Maybe that’s a sign that this team still has room to grow, still has potential to reach. The emergence of Wagner and Wilson would appear to be proof of that. Behind the play of those two, Michigan survived uncharacteristically poor performances from Irvin and Derrick Walton Jr.

Beilein certainly recognized what his team had done down the stretch.

“So you haven’t seen us win many games like that,” Beilein said. “ … Our defense was gritty, it was tough in the last two minutes, it was everything it wasn’t against Virginia Tech in the last two or three minutes … our kids just sat down and guarded. Nobody could make a shot — it wasn’t a pretty offensive game. But we got done what we had to get done.”

Texas is no powerhouse team, having lost three straight games by nine or more points to Northwestern, Colorado and UT-Arlington, and Michigan’s clutch play at the end doesn’t erase all the bad play from the rest of the game. Even Beilein himself thinks his team is “just okay” and “not that good yet.”

But with last week’s collapse against the Hokies still fresh, the win over Texas is a small step in the right direction.