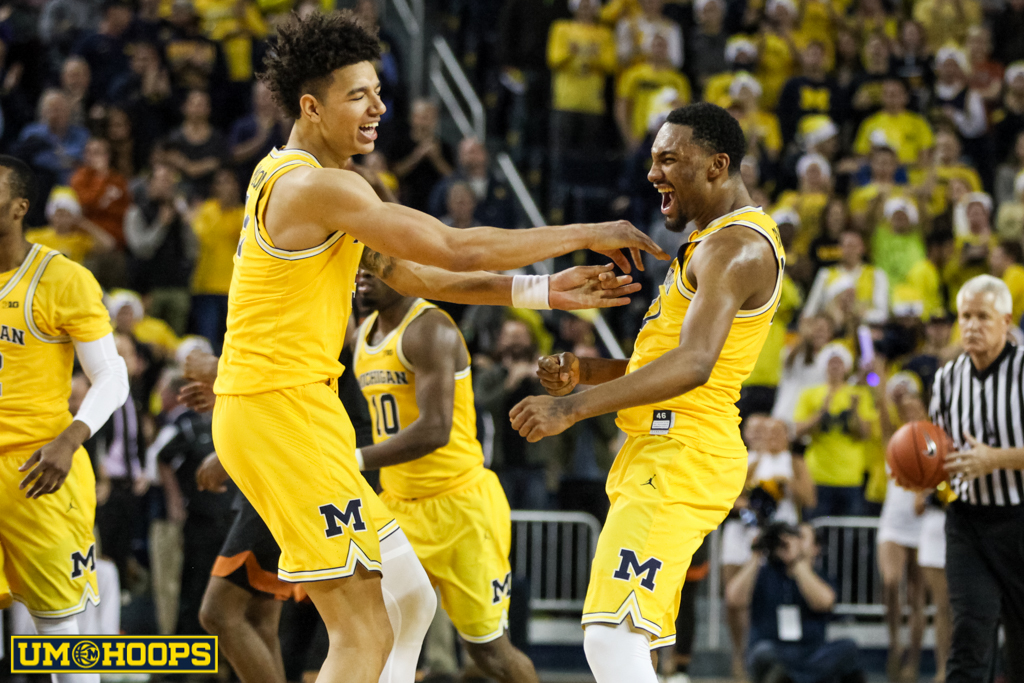 The Wolverines have talked about running more, but will they actually do it against UCLA?

At the start of November, before Michigan had played a game, John Beilein said he wanted his team to run more. He repeated that message today, in advance of Saturday’s game against UCLA.

Most all players, coming out of high school, say they want to play at a school where they can fast break often. Of course, that takes work. Running is not getting down the court in six or seven seconds, according to Beilein. It’s getting down in four.

“If you had Muhammad-Ali Abdur-Rahkman on one wing and DJ Wilson on the other sprinting end to end, what a different team we’d become,” Beilein said more than a month ago.

On Thursday, he said the Wolverines have been running at just a “comfortable” speed. “I think we have to get tired running our fast break sometimes.” Derrick Walton and Wilson agreed.

Beilein wants multiple “push men,” as he calls them — players who can grab a rebound or receive a quick outlet pass and push the ball up the floor. Right now, Walton is the only push man. And perhaps because of that, Michigan has taken a shot in transition on just 11 percent of its possessions, per Synergy, compared to 16 percent over the course of last season.

You don’t need to be a coach to know that a well-executed fast break is a great way to get easy baskets and take pressure off the half-court offense. That will be important against a UCLA team with so much length. The Bruins rank sixth in KenPom.com’s “effective height” metric, and they’re blocking shots and defending twos at a high level.

“We’re certainly going to run when we can,” Beilein said on Thursday. “But at the same time, we have to make sure we take good shots and make them take guarded shots.”

UCLA will run — almost a fifth of the Bruins’ possessions come in transition — and Michigan might need to try it themselves if they want to keep up.

Beilein is very familiar with one of UCLA’s star freshman, TJ Leaf. The versatile 6’10” forward has Midwest ties — his parents are from Indiana and his dad played at Evansville — and Beilein recruited him hard.

“We saw him a lot, I went out there three times I think,” the Michigan head coach remarked. “He is not just a 6-foot-10 forward, he shoots, he passes. Look at his stats right now for a freshman with a 225 pound body — the way he’s rebounding is really impressive.”

Leaf is averaging 17 points and nine rebounds and has made 9-of-18 threes.

Beilein is impressed by the impact that Leaf and freshman Lonzo Ball (9.3 assists per game) have made to a team that missed the NCAA Tournament last season and finished a game under .500. Now the Bruins are the No. 2 team in the country and just beat Kentucky at Rupp Arena, despite only losing one player from last year’s team.

Beilein, as he should, believes in the importance of home-and-home series with marquee programs. Neutral floor tournaments make filling out a schedule easier, but fans want to see top-ranked teams in person.

UCLA is especially enticing since Michigan has so many alums in California. The Bruins make the return trip to Crisler next December.

In an effort to minimize the effects of jet lag, Michigan will fly to Los Angeles tonight and, after a 5:00 pm local tip on Saturday, stay overnight before returning home. The Wolverines play again on Tuesday night at 9:00 p.m.

The trip out west will be a return home for Wilson, a Sacramento native who wanted to get away from home for college to force himself to be more independent.

The redshirt sophomore estimated he’d only been home four or five times since coming to college and while he is excited for family to be able to see him play in person on Saturday, he’ll treat it as just another game. UCLA did not recruit Wilson and the Bruins never “caught [his] eye” growing up. He followed the Cal and Stanford programs more closely.