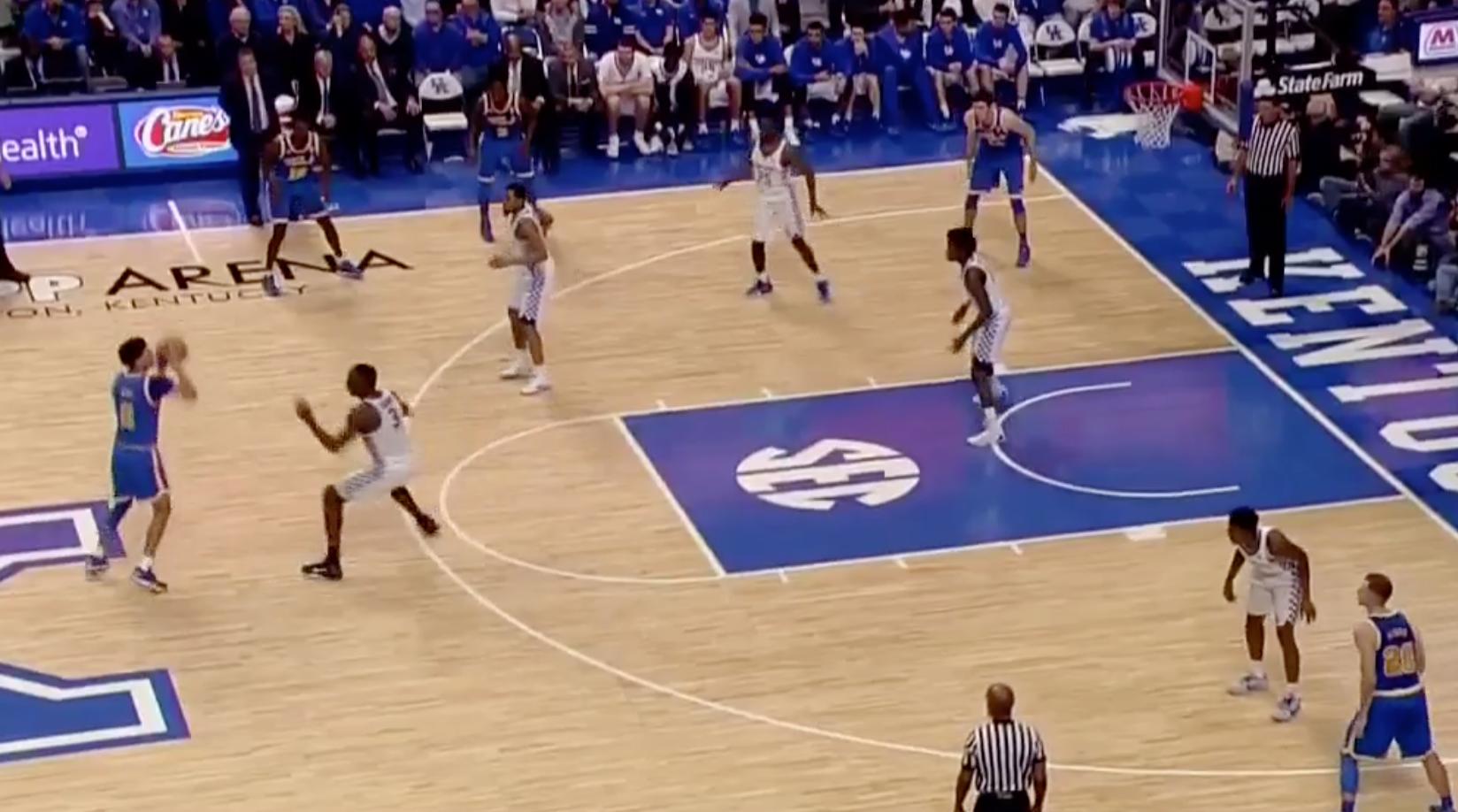 Michigan heads to Los Angeles this weekend to face one of the best offensive teams in the country, the UCLA Bruins.

In its sixth game this season against a high-major opponent, Michigan will travel to UCLA to take on the No. 2 ranked Bruins this weekend.

UCLA has cruised to its 9-0 record by knocking off an array of smaller West Coast schools (Pacific, Cal St. Northridge, San Diego, Long Beach St., Portland and UC Riverside), winning the Wooden Legacy tournament (Nebraska and Texas A&M) and then traveling to Lexington to beat Kentucky, 97-92, at Rupp Arena.

UCLA is averaging 97 (!) points per game thanks to its incredible offensive efficiency (117.7 pts per 100 possessions), fast tempo (76.1 possessions per game) and NCAA-leading shooting (63.5 eFG%). If those numbers sound ridiculous, it’s because they are. This UCLA team — to this point — looks like a group that plays with the ruthless offensive efficiency of Michigan’s 2012-13 or 2014-14 teams, but at a 15-20% faster tempo.

UCLA can give you buckets just about anywhere on the floor and the roster is stocked with shooters and scorers and has a lottery pick to distribute the ball.  Perhaps the most impressive thing about UCLA’s offense isn’t how well it shoots or how fast it plays, but that 67.3% of its shots are assisted — the 8th highest rate in the country.

The Bruins haven’t turned the ball over much this season with a turnover rate of 16.3%, but did give the ball away on over 20% of their possessions in their two most difficult games against Texas A&M and Kentucky. Because of how fast they run — the average UCLA offensive possession takes just 14 seconds, per KenPom, compared to Michigan’s 20.1 seconds — the Bruins don’t crash the offensive glass much (224th in offensive rebounding) or get to the free throw line (277th in free throw rate).

Defensively, UCLA is good, but not nearly as good as it is on the offensive side of the ball. The Bruins are ranked 58th nationally in adjusted defensive efficiency and that’s an important distinction compared to their top-10 offense. This isn’t a group that dominates defensively with size and athleticism on the glass, not a team like South Carolina or a vintage Purdue team that is going to pressure the ball at 35 feet and take you out of your offense.

UCLA is, in so many ways, a hyper-speed version of some of the best Michigan teams — the defense will be good enough because the offense is going to score so many points that it’s impossible for the other team to keep up.

The Bruin defense is built inside out with great rim protection (44% allowed within 5 feet, 41.9% allowed on all twos) and shot blocking (29th in block rate). The weakness is on the perimeter where they don’t force many turnovers (303rd nationally) and allow opponents to shoot 35.7% from three-point range (212th).

UCLA games have been low free throw affairs as well as the Bruins are ranked 277th in getting to the free throw line and 23rd in preventing free throws.

6-foot-6 freshman Lonzo Ball is projected 4th in this year’s NBA Draft according to Draft Express. He can dish it (9 assists per game), drive it (70 2P%) and shoot the three (44%). He’ll shoot from anywhere on the floor with any amount of time on the clock — just watch the video — but he’s also an elite finisher at the rim. His one problem has been turnovers at times, he had 6 giveaways against Kentucky and 5 against Texas A&M.

Michigan fans will remember the name TJ Leaf, a 6-foot-10 freshman who drew plenty of recruiting interest from John Beilein and his staff. Leaf eventually committed to Arizona before flipping to UCLA later in the process. Now he’s averaging just shy of a double-double with 17 points and 9.4 rebounds per game. He’s made 9-of-18 threes on the season and is a pick-and-pop threat from deep, but his athleticism is underrated around the hoop. He’s active on the offensive glass, cutting to the rim and in transition and is shooting 71% inside the arc.

Watching Leaf on film, his positioning and cutting really stands out. He gets to the right spaces on the floor and the ball finds him for easy baskets.

The beauty of UCLA’s roster is that Steve Alford doesn’t just have a bunch of talented freshmen to rely on, he has an array of talented upperclassmen to surround them with. The scariest thing for opposing defenses might be that anyone who will see time at the 1, 2, 3 or 4 position is shooting 40% or better from three-point range.

6-foot-3 senior Bryce Alford was UCLA’s primary playmaker last season, but has settled into more of a specialist role shooting the ball this year. His assist rate is down from 25% to 10.9% with the addition of Ball to the rotation, but he’s 22-of-53 (41.5%) from three-point range and has made 235 threes for his career.

6-foot-5 senior Isaac Hamilton has developed into a reliable floor spacer who can attack close outs. Hamilton is 8-of-11 on three-pointers from the left corner and is shooting 45% from three for the season. He’s shot more threes than twos this season, but last year he was more of a slasher with nearly two-thirds of his action inside the arc. He still appears to have that ability, shooting 59% inside the arc in 2016.

7-foot junior Thomas Welsh does what you expect from a 7-foot, 245 pound big man — block shots, grab defensive rebounds — and then some. Where he really thrives is along the baselines and in the mid-range. He’s consistently been one of the most reliable mid-range jump shooters in the country and he shoots over 50% from both baselines and the left elbow.

Here’s his shot chart from Krossover:

UCLA isn’t a deep team with just 23.4% of available minutes going to the bench (an even lower ratio than Michigan), but the pieces who will see the floor are talented.

6-foot-1 sophomore Aaron Holiday started every game last year and now plays around 20 minutes per game off the bench as really UCLA’s only reserve guard. Holiday shoots 52% inside the arc and 53% from outside. He’s also the second-best setup man on the roster and has the ability to get to the free throw line.

6-foot-10 freshman Ike Anigbogu was out for a month after undergoing knee surgery, but he’s back in the lineup and has seen an increased workload over the last four games.  The 6-foot-10, 250 pound sophomore rebounds, blocks shots and finishes around the rim in limited time. He had 6 points, 6 rebounds and two blocks in 17 minutes at Kentucky last weekend and is ranked 23rd in DraftExpress’ Top-100 prospects list.

KenPom projects a 78-71 UCLA win, giving the Wolverines a 27% chance of the upset. When the Vegas spreads roll out this morning I’d expect to see something even higher than that 7 point gap.

If you are searching for narratives or some reason to be optimistic, there are plenty of angles that you can try to convince yourself of.

Maybe Michigan will play better without the pressure of a ‘supposed to win’ game at home. Maybe UCLA will start believing its hype and have a mental lapse after picking up a monumental win at Kentucky last week. Maybe the Wolverines match-up better against an offense-first team like UCLA than dominant defensive team like South Carolina. Maybe Michigan should have been running more all along and will fare better in an uptempo game with average defense.

Take your pick, but at the end of the day this is a UCLA roster with an incredible amount of talent and shooting and it’s hard to imagine the Wolverines have the horses to keep up for 40 minutes.