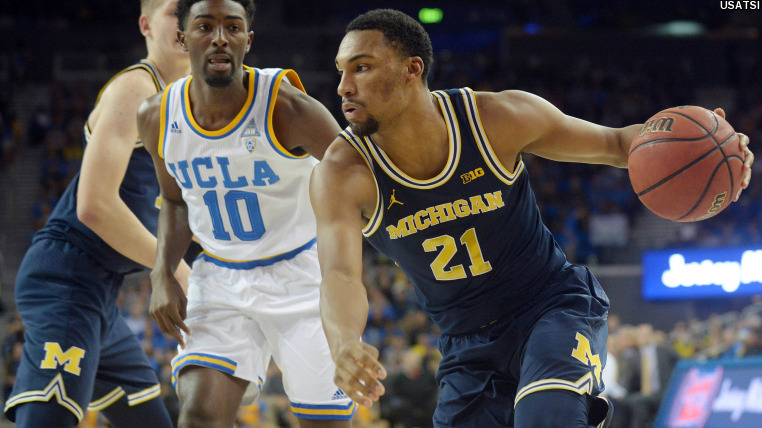 Both teams scored 50 points and combined to make 22-of-30 threes for an incredible 1.57 points per possession in the first half — that’s over a point and a half every time down the floor.

In the final 20 minutes, UCLA kept up that pace Michigan ran out of steam. The final result was a 102-84 defeat and a long flight home.

Michigan went three for three with UCLA for 20 minutes in a beautiful first half that was an offensive masterpiece.

Both teams scored 50 points and combined to make 22-of-30 threes for an incredible 1.57 points per possession in the first half — that’s over a point and a half every time down the floor.

In the final 20 minutes, UCLA kept up that pace Michigan ran out of steam. The final result was a 102-84 defeat and a long flight home.

In spite of UCLA’s historic offensive performance, there were still critical moments when the game lay in the balance and was right there for the taking by the visitors. The Wolverines just couldn’t make the plays at crucial times and UCLA did.

Leading by 7 with under two minutes to play in the first half, Michigan allowed UCLA to close the first half with three triples and tie the game. The third late first half run that U-M has allowed to a high-major opponent in the last three chances.

With the game tied coming out of the break, the Wolverines missed three shots around the basket and a pair of threes and found themselves down 8 before the under 16 timeout. They’d be playing catch up for the rest of the game.

With the lead back down to 5 points and under 8 minutes left on the clock, UCLA missed a pair of free throws that would have allowed the Wolverines a chance at cutting the deficit to a single possession. Instead Michigan failed to corral the rebound as the ball fell to TJ Leaf for an easy basket.

UCLA went on to finish the game on a 25-12 run and that was that. It sounds crazy given the final score, but those three blips in the game cemented the final result.

Michigan’s defense just wasn’t good enough to get the job done. While the Bruins appear to have a truly elite offense, the Wolverines can’t allow any team to score 1.58 points per possession and hope to win. The game dropped Michigan’s adjusted defensive efficiency from 34th to 60th on KenPom and 1.58 points per possession allowed marks U-M’s worst defensive performance of the KenPom era (2002+).

I thought that there were a few decent moments in the first half for the Wolverines where they they forced UCLA to make a tough shot, but in the second half everything unraveled.

“I thought (in) the first half, we got open looks and they didn’t,” Beilein noted after the game. “And we still shot the same.”

The second half was a much different story as UCLA got to the rim with ease and made 20-of-27 shots in the final period. Steve Alford went primarily with some dribble weave action until he could exploit either Duncan Robinson or Muhammad-Ali Abdur-Rahkman off the drive.

It’s hard to put into words just how dangerous this UCLA offense is. The Bruins are shooting 61.6% on twos and 47.1% on threes for the season and their 80.2 eFG% tonight looks ridiculous because it is, but their average eFG% (65.1%) is closer to the ceiling of a normal team.

On the other hand, this was also UCLA’s best offensive outing of the season and a stern reminder that Michigan’s defense still has some significant vulnerabilities. This team still has to try to hide several individual defensive deficiencies on the perimeter and has big men who get in foul trouble and don’t do a great job of protecting the rim.  UCLA has more tools to exploit those weaknesses than other teams, but that doesn’t mean that other teams can’t and won’t try to do the same thing.

Michigan managed to play its third-best offensive game of the season, hit 14 threes, and still lost by 18. The offense played with the same incredible efficiency as the Bruins in the first half thanks to torrid three-point shooting, but cooled off the second. UCLA has plenty of its own defensive demons to work out, but playing on the road in front of a sold out crowd the Wolverines made shots early and often.

Michigan shot just 47% inside the arc and its inability to finish over length at the rim was perhaps the biggest issue in an otherwise stellar offensive showing.

What’s next? Michigan needs to handle business in three tune-ups before opening the Big Ten in Iowa City against another high-tempo, offense-first group on the road. A 3-loss non-conference performance would probably qualify as a passing ‘B’ grade, but the Big Ten will be the real test.