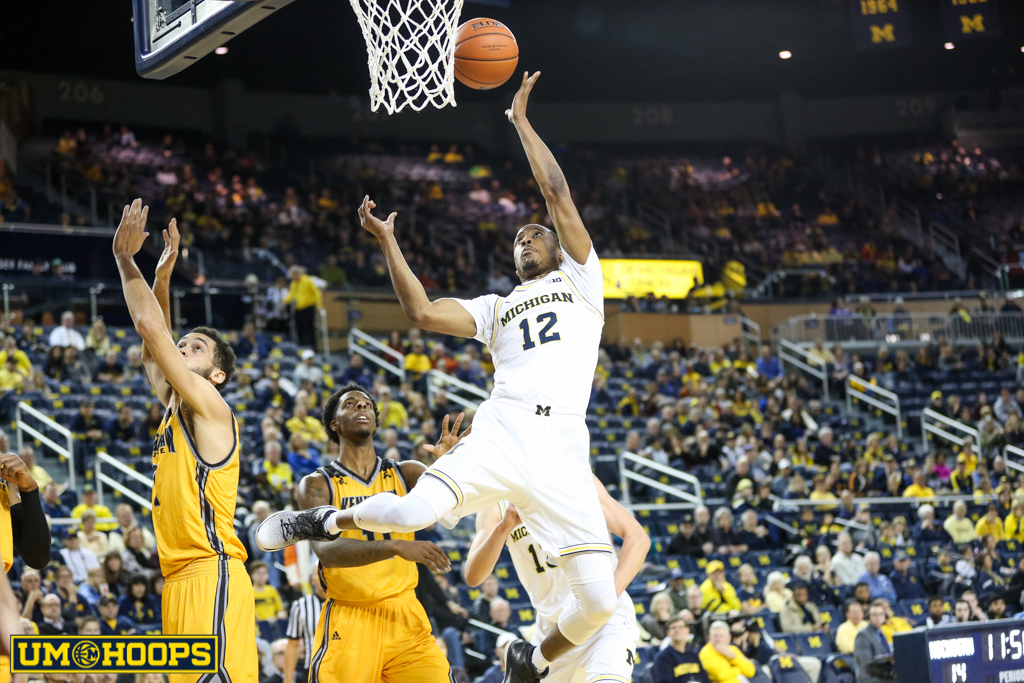 If the Wolverines want to clean up their defensive breakdowns, they need to improve their focus and communication.

UCLA is not the best opponent against which to judge defense. The Bruins (10-0) lead the country in points per possession and have scored at least 97 points in seven of their 10 games. They are loaded with NBA talent and great shooters and certainly made Michigan pay for its defensive mistakes. That’s the thing, though—there were plenty of mistakes. And Michigan has played far less talented offensive teams and had similar miscues.

John Beilein talked a lot about defense today. That he believes many of the issues are about focus as opposed to strategy is either good news or bad news, depending on what you think is easier to fix. He called some of the breakdowns against UCLA “perplexing” and “unexplainable.”

“We’re just standing there watching something happen that we know better of, and we’re just frozen,” he said. He later added that sometimes a player, either after a media timeout or immediately after subbing into the game, has not been fully aware of what’s happening. “We have to do something to increase our processing speed.”

Zak Irvin and Moritz Wagner can be loud at times, but in general this is a soft-spoken team. Beilein said there were times at the sold-out Pauley Pavilion on Saturday that the Wolverines simply didn’t communicate loudly enough with each other. If you’re going to switch a defensive assignment mid-play, you better yell.

“It’s something you have to have growing up—defense has to be important to you,” Muhammad-Ali Abdur-Rahkman said. “A lot of us, even myself sometimes maybe, don’t have that instilled in us. We’re trying to work every day to have that—that one-on-one, guard your yard idea, plus having that team defense mindset too.”

Michigan has lacked a focus and/or energy level on defense too often this season, but it has not reached a crisis level. The Wolverines are a respectable 60th in the country in adjusted deficiency efficiency as measured by KenPom.com, better than their rank at the end of the last three seasons. UCLA aside, they’re doing a good job of preventing three-point attempts (if not makes) and are forcing teams to play slower than they generally prefer. But the on-court “daydreaming,” as Beilein called it, can’t continue.

Abdur-Rahkman’s confidence was not particularly high heading to Los Angeles, but he had some offensive success against the Bruins. While he only shot 4-for-11 (3/8 from two; 1/3 from three), he did make some strong drives to the basket.

“I was in a little slump, settling for threes a little too much,” the junior said today. “Last game I got back to getting to the basket and not settling.”

That mentality will make the coaches happy. Beilein gets the most irritated on the sideline when a player settles for a jump shot instead of attacking the hoop. That’s especially true of Abdur-Rahkman, since dribble penetration is a strength of his.

“You see his speed, his athleticism several times a game,” Beilein said. “We’ve got to see it more.”

Before Michigan’s first regular season game, Beilein felt he had enough depth this season that guys could (1) give max effort and (2) be replaced if they weren’t doing so. As the freshmen are not as developed as he may have liked, that hasn’t exactly been the case.

“We want guys to play with the idea that someone might catch them in a minute—that you’ve got to play for your job every day,” Beilein said today. “That hasn’t necessarily been a motivator for [Abdur-Rahkman] because he looks behind him and there’s nobody there.”

You know the behind-the-back dribble move Wagner has shown off several times this season? Sure you do. He does a hard dribble one way only to quickly bounce the ball behind his back and change direction.

“That’s my move,” Wagner said with a laugh when asked about it. He said he’s been doing it for five years and doesn’t work on it specifically or premeditate its use in games. “It’s just instinct.” His teammates find the move to be funny.

“They always laugh when I do it because it looks so weird and it works almost all the time,” Wagner said. “They say it’s my move so I’ve claimed that move.”

So far this season, when Wagner deploys that move it’s been hard for defenders to stay in front of him without fouling.