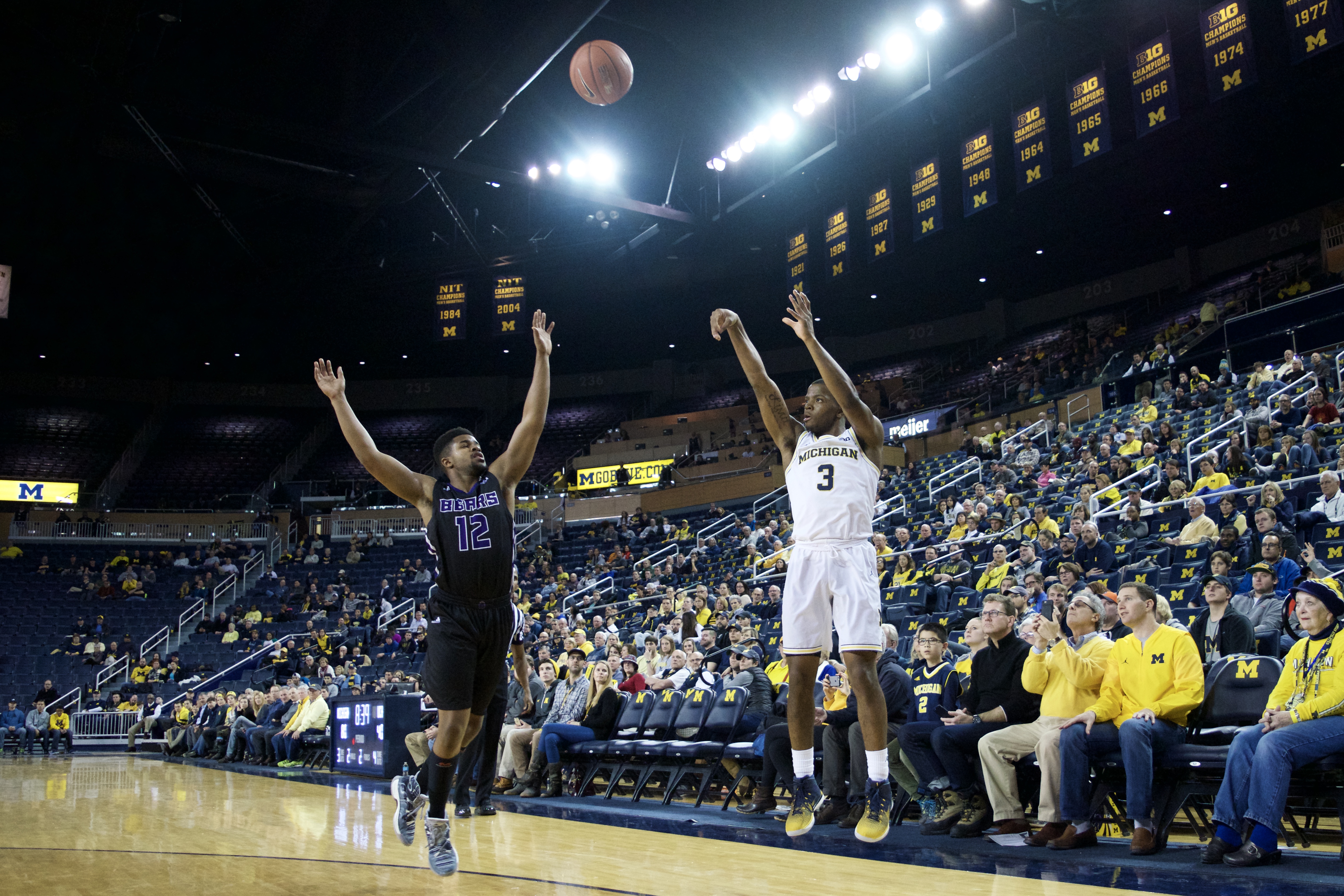 The freshmen saw some action last night and should continue to get minutes in these final two nonconference games in preparation for the Big Ten.

Fans love freshmen. They’re shiny and new and ooze that tantalizing quality: potential. High school highlight videos typically make incoming players look like stars, and recent history—at Michigan and elsewhere—proves that freshmen can be immediate difference-makers. So far for Michigan’s newcomers, that hasn’t been the case.

Only one, Xavier Simpson, has cracked double-digit minutes in a game. It took Ibi Watson 12 three-point attempts before he hit one. Jon Teske is averaging just three minutes a game and Austin Davis is on track for a redshirt.

John Beilein has repeatedly said this is normal. Freshmen almost always take time to develop, to learn the reads on offense and positioning on defense. The language is different at the college level. Angles are more important.

“It’s not fair to put them in [games] when they’re still going through things that are very typical of freshmen,” Beilein said a couple of weeks ago.

The outcome of last night’s game against Central Arkansas, a 97-53 win, was determined very early. And so Simpson played a career-high 18 minutes (tallying seven points, two assists, and three steals) and Watson played eight. Beilein saw some positives in their play.

“They are growing. X had a couple of really good passes where he might have left his feet and charged a month ago. He’s lost some confidence because he’s had to take some steps backwards… There are some things he’s re-working. We’re seeing some carry-over [from seeing to doing].

“Ibi the same thing. I don’t care how that three went in. He can shoot much better than he has, but it went in. Now he’s got that one to his credit and hopefully he’ll grow from that because we do need that off the bench.”

Both players have said the game has slowed down for them considerably the past couple of weeks. The coaches have been patient with them. Despite Beilein’s reputation as an offensive mastermind who runs a complex read-and-react system, Watson said the defense has been harder to pick up.

“The offense [is] a little more natural for me. In high school, defensive schemes might not have been as hard to grasp.” Asked for a specific example, Watson said, “A lot of the off-the-ball defensive schemes—making sure you’re always alert and you always know whether to attack the roller or what.”

Beilein doesn’t believe this Michigan team is good enough defensively to compensate if a player is blowing assignments, and he’s right. Michigan has two more non-conference games, against Maryland Eastern Shore on Saturday and Furman next Thursday.

“I’d like to get them more [minutes] in these next two games,” Beilein said. “We’re not going to do it to sacrifice a win. If they’re getting beat defensively or taking us out of the flow, [I’ll say,] ‘OK, keep practicing.'”

There’s certainly value in throwing a guy into the fire of game action, but the players can earn their coaches’ trust in practice. They’re getting plenty of opportunity, as seniors Derrick Walton and Zak Irvin often sit out of drills and try to mentor the freshmen. Beilein has harped on how much time the freshmen are practicing, from drills to walkthroughs to film study. He’ll use every minute the NCAA permits these next couple of weeks in the hope of preparing them for Big Ten play. They’re also learning during games, even on the bench.

“If Derrick makes a mistake, [Coach Beilein] is going to talk to me,” Simpson said. “So that’s pretty good, to see what he did. If Zak makes a mistake he may talk to Ibi or the bench [in general].” Simpson will also sit next to senior Andrew Dakich. “He’s a pretty good help out there just knowing the plays and reading the offense and defenses.”

Without the freshmen, Michigan only goes seven deep. Beilein sees that as an issue not so much for rest as for potential foul trouble. The Wolverines open Big Ten play at Iowa on Jan. 1. That’s 2.5 weeks of additional development time for the rookies. Let’s see how they progress.