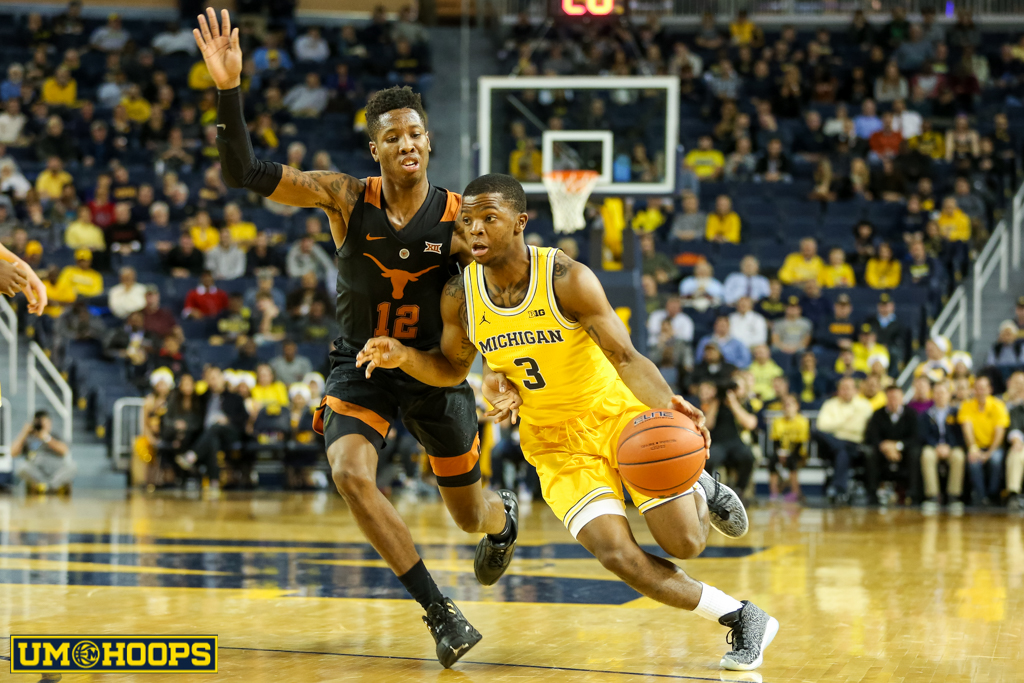 In this week’s mailbag, we look at Michigan’s Big Ten schedule, Xavier Simpson and more.

On a related note, is Michigan running it’s full offense yet with X in the game or are they running more basic sets or iso plays when Simpson’s on the court?

This is an interesting one because we just saw Xavier Simpson play one of his better games of the season against Central Arkansas. He finished with 7 points, 2 assists, 3 steals and 2 rebounds in that easy win in 18 minutes.

Simpson hasn’t shot much — he’s 1-of-5 on twos and 2-of-5 on threes — but he has handed out 12 assists in 105 minutes. One reason he doesn’t shoot as often is because there’s usually some other scorer on the floor with him whether it is Derrick Walton, Zak Irvin, Abdur-Rahkman or Moritz Wagner. Scoring is higher on all of their game plans than Simpson’s. Simpson’s primary responsibility is to run the team, play good defense and get the ball to those guys in the right spots.

The other element of the equation is that he’s a) really small and b) still learning the offense. The combination of those three things leads to a guy who hasn’t really gotten a lot of opportunity and is still thinking the game rather than playing it.

I wouldn’t say Michigan runs an entirely different offense when Simpson is on the floor, in actuality it’s probably the same offense but there are 5, 10, 20 or 50 different reads out of any given set that he might now know yet. There are probably another 50 that only John Beilein knows for any given set yet as well.

buckets12: This kinda goes with @mgobluehoops23‘ question but I’d be curious to see a Rotation power rankings. Meaning of the 8 (or 9 counting Ibi) guys that play, who’s playing the best relative to expectations and whose minutes should be on the rise or downfall?

Let’s give this a shot as the relative to expectations element makes it especially interesting. I’m probably going to go with tiers just to make it a little easier to follow.

@rnoble0540: @umhoops at this current state early in the season…..with both MSU and UM….do we have a change to beat state….

Yes. Both fan bases probably could go on for an hour about the current problems with their own teams, but I don’t see why Michigan can’t beat Michigan State this year. I would buy, and probably make, an argument that the Spartans have the higher ceiling because Miles Bridges is one of the only surefire pros in the mix, but the Spartans might also have more to figure out in the present.

‏@kevdp21: @umhoops why do no fans show up to crisler? Would they ever lower ticket prices for people to show up?

Brendan Quinn wrote a nice piece on Michigan’s declining attendance over at MLive and I think the problem is pretty easy to explain.

At its core, Michigan is a football school. That’s never going to change. Michigan was good to great from 2011 through 2014 and season and student ticket sales went through the roof. It sounds crazy to say that student tickets have dropped from 3,193 to 1,743 over two years, but to me — as someone who went to basically every Michigan basketball game throughout the aughts — it is almost crazier that Michigan sold 3,000 student tickets at all.

So now we’re left in a situation where the Wolverines underachieved for two years in a row — and the football program has undergone a Harbaugh revival — and ticket sales have understandably tanked.

There are other issues at play such as late weeknight games, guarantee games and everything else, but those are a fact of college basketball basically anywhere and are just part of the game.

FL_Wolve What are your thoughts on why the sum of the parts this year appears to be less then the total sum? What I mean by this is that we have two top 50 kids in Walton and Irvin who have played decent throughout their careers. We have two top 100 kids in Wagner and Wilson who are finally playing up to their rankings. And then we have MAAR who was not highly sought after out of high school but who has played fairly well over the past two years. Add in an average center in Donnal who played significant minutes last season and I would have expected a bit more success this season. Why is there so little chemistry with this team?

I’m sure it’s fair to say that Michigan is somehow less than the sum of its parts. It’s not like this is a roster loaded with pros and is underachieving. This is a team that has good players and some experience and looks like it will enter Big Ten play at 10-3 despite playing six high-majors. If Michigan hadn’t blown that game against Virginia Tech I think this would have been a very good non-conference, as it stands it is passable.

That being said, there are obviously some problems with this team. Finishing games and halves has been a problem since last year (Notre Dame in Brooklyn) and we’ve already seen that this year against the Hokies. Either way, we’ll learn much more about this team in Big Ten play.

@J_Schens15: @umhoops For Michigan to be successful in B1G play, who will need to step up their game more? Walton/Irvin/MAAR?

When Zak Irvin plays well, Michigan usually wins. He’s probably going to have the ball in his hands the most often and if I had to pick one player to be on his game every night, I think it would be Irvin.

BleedBlue: Early B1G wins prediction? What improvements/failures are most likely to move the needle? Just how big and bad is our schedule?

KenPom says 10-8, but gives Michigan a 50% chance or better of winning 12 different games. I think that range seems reasonable overall.

Michigan’s schedule is odd because it starts rather manageable — at Iowa, Penn State, Maryland, at Illinois, Nebraska — but then gets difficult in a hurry.

As a reward, Michigan gets to close the season with four of five games on the road — at Minnesota, at Rutgers, Purdue, at Northwestern and at Nebraska.

A hot start will be important because there aren’t many (or any) easy stretches from there on out.