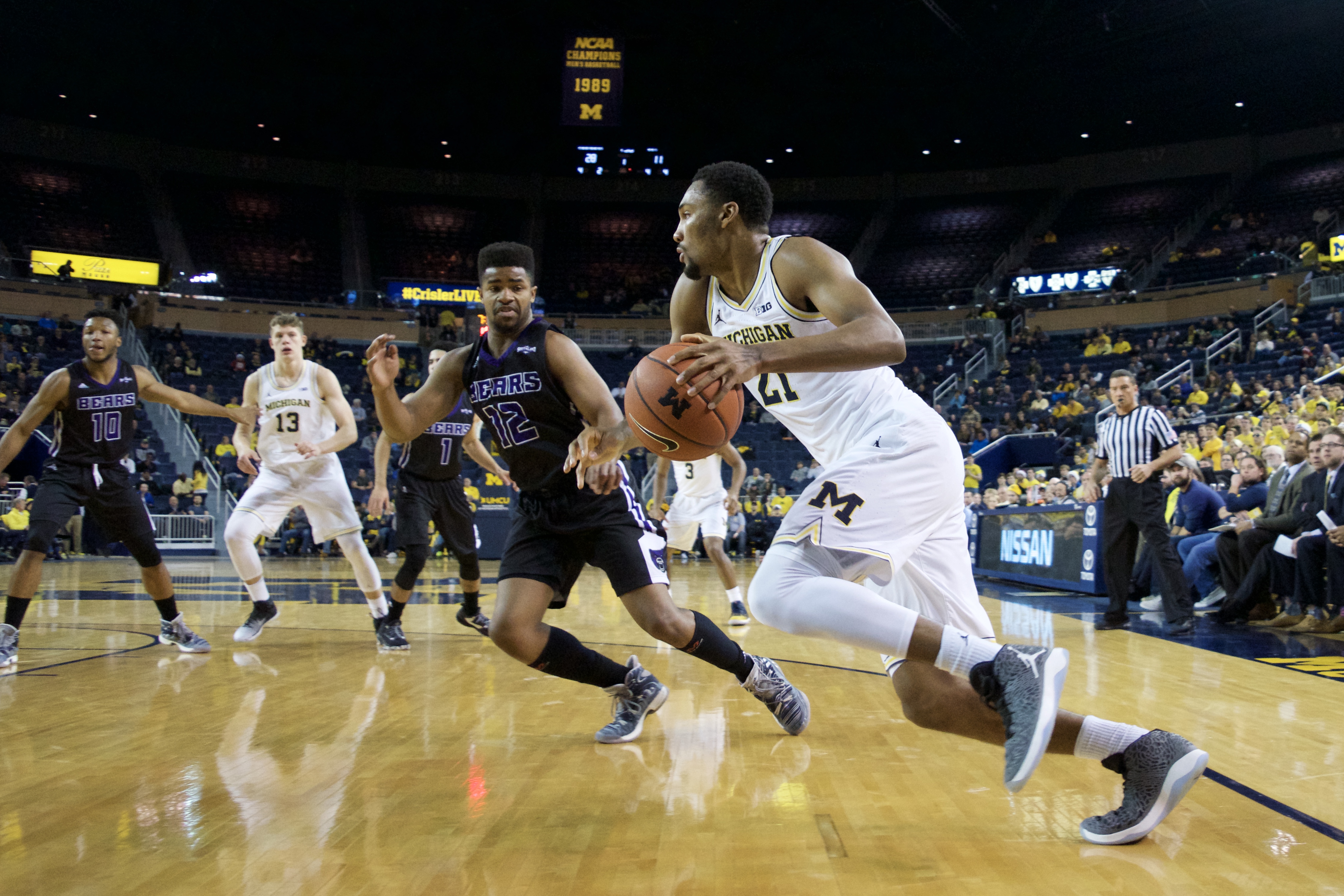 The ball is popping around on offense and it has led to three straight strong offensive performances.

It’s one of the few stats we still can’t measure: How Big the Basket Looks. Right now for the Wolverines, the rim looks like an ocean. The change in perspective happened in California.

Michigan had come off a bad offensive performance against Texas, scoring just 53 points (.87 per possession). Michigan’s guards were particularly out of sync in that game and the three-point shooting was off (6 of 19). Then the Wolverines headed to UCLA and lit up the scoreboard, scoring 50 in the first half and finishing with 84 (1.31 per possession), making 14 of 26 threes. Five different Wolverines drained at least two from deep.

The Texas game was a win. UCLA was a loss. And yet, offensively, much more confidence was gained from the latter. Several Wolverines have said as much since their return from the West Coast, and it has showed in the two games since.

“I’d be lying if I said the confidence didn’t carry over from making those shots in a hostile environment,” Derrick Walton said.

The opponents—Central Arkansas on Tuesday and Maryland Eastern Shore on Saturday—haven’t made it especially difficult, but Michigan has posted its best offensive performances of the season, cracking 1.4 points per possession in both games.

The chemistry on that side of the ball has looked a lot better. Despite a very similar roster to last season, first-year starters Moritz Wagner and DJ Wilson are getting significantly more minutes, and it’s taken this particular group some time to figure out their strengths and preferences. Eleven games in, they’ve found a nice groove.

The Wolverines assisted on a whopping 82 percent of their baskets yesterday (28 of 34). Their assist rate against Central Arkansas was 69 percent. Those were their two best performances in that category since the opener against Howard.

John Beilein had been saying the past couple of weeks that his guards needed to play better, more consistently. He was very pleased that the backcourt of Walton and Muhammad-Ali Abdur-Rahkman combined for 15 assists and no turnovers yesterday against Maryland Eastern Shore.

“That backcourt is developing, they’re getting some chemistry,” Beilein said.

Walton said it was just a matter of time. “We’re learning to play a little bit together,” he said. “We love each other as brothers and we want to see everybody succeed so we share the ball.”

It’s mentioned to Beilein that it doesn’t seem like the ball is sticking as much as earlier in the season.

“It isn’t. [Maryland Eastern Shore] played into that, trying to turn us over by trapping a lot. Our teams have traditionally been good passing teams when [opponents] do that. I was happy with way we saw the extra guy. There’s just this little chemistry forming right now that I can see, that Duncan knows, ‘I’m the hunter coming off the bench.’ And they were looking for him a little better.”

After starting the first two games of the season, Duncan Robinson is becoming more comfortable coming off the bench. (Officially, he started yesterday, but it was a clerical mistake and he checked out at the first dead ball.) He said the other day that he’s not given any additional free reign to shoot with his new role, but that Beilein is always reminding him to hunt shots.

He’s had so many open looks the past few games because his teammates are driving and kicking. Central Arkansas coach Russ Pennell pointed out on Tuesday how dangerous Michigan’s offense is when that happens.

“When they can penetrate and their passers get two feet in the paint, they’re going to make the shot on the weak side.”

Of Michigan’s seven “starters,” as Beilein calls them, five are shooting at least 40 percent from three. After a rough start to the season, Wilson has found his touch from the outside and is 9 for 23 (39 percent). Same with Abdur-Rahkman, who is at 31 percent but is 5 for 10 over the last two games. That allows Michigan to space the floor and pull opposing bigs away from the basket.

That shooting ability, combined with recent tweaks—Abdur-Rahkman (who posted a career-high 10 assists Saturday) making sure his head is up while dribbling, Walton looking at the basket more—equal a high-efficiency offense.