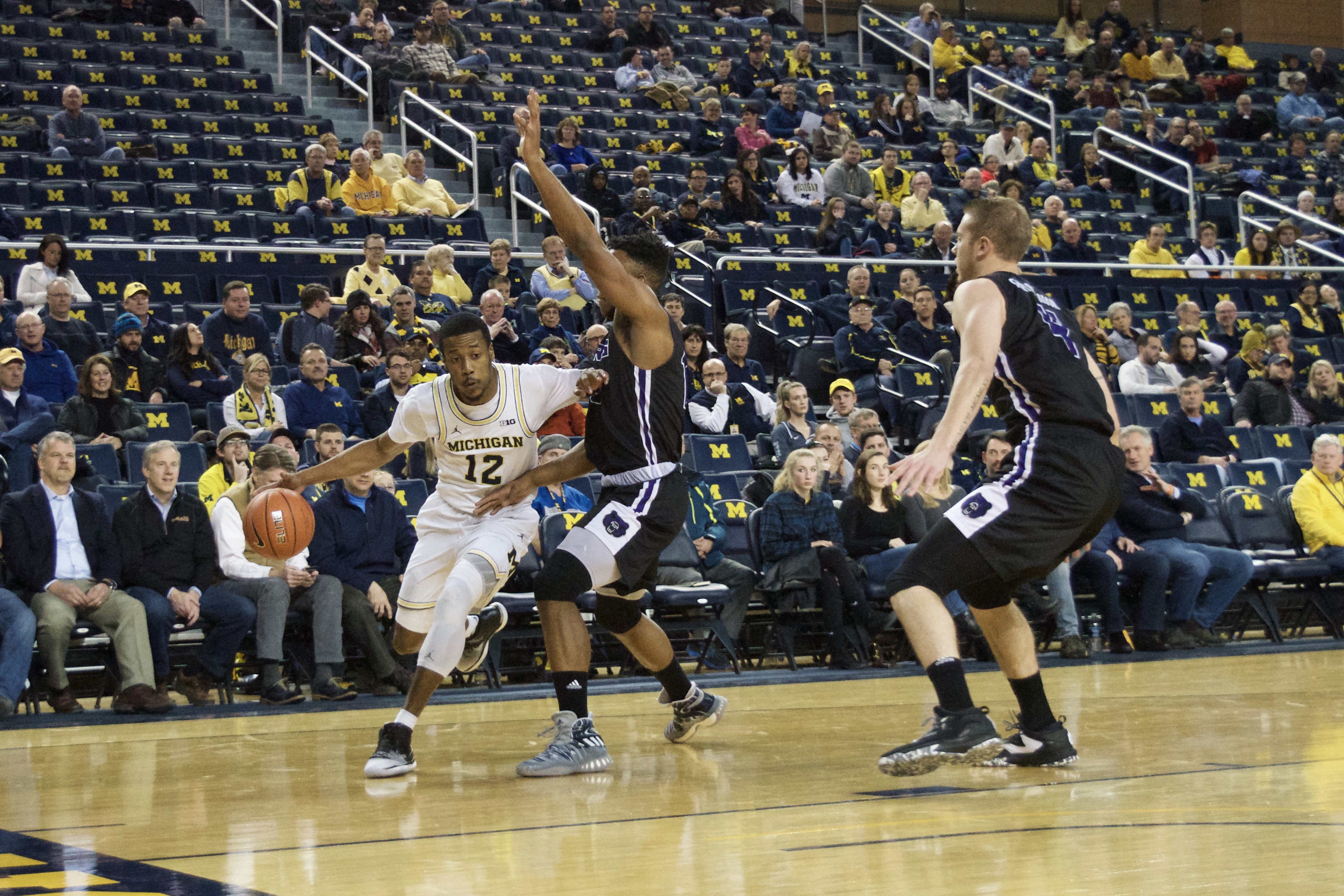 Michigan junior Muhammad-Ali Abdur-Rahkman had one of his best days passing the ball while Michigan coaches urged Derrick Walton to be more aggressive searching for his shot.

Michigan’s game against Maryland Eastern Shore tipped-off without a familiar face on the court.

Junior guard Muhammad-Ali Abdur-Rahkman, who started every game of the season before today, had been replaced by redshirt junior forward Duncan Robinson — though it was no fault of Abdur-Rahkman.

Instead, the starting lineup switch was due to a simple clerical error on Michigan’s part. Robinson, who had moved to the bench in favor of redshirt sophomore forward DJ Wilson earlier in the year, had not usurped Abdur-Rahkman; a staff member had simply checked the wrong name. The snafu was so unexpected that Abdur-Rahkman still ran out onto the floor with the starters.

But starter or not, it was no matter for Abdur-Rahkman. He checked into the game after less than one minute before promptly playing one of his better all-around games of the season.

Michigan coach John Beilein has spoken often this year about the need to unlock Abdur-Rahkman’s full potential as both a distributor and defender, and the junior’s development in both regards was on full display in Michigan’s 98-49 win over the Hawks.

“I just think (Abdur-Rahkman’s) got a whole another level of who he can be as a defender,” Beilein said after the game. “We challenged him with Andino today. A lot of times we’ll take a guy like that and put Derrick Walton on him. But we wanted to challenge (Abdur-Rahkman). “Muhammad has a whole another level of play that we’re trying to get out of him. You can see these baby steps every day of seeing the floor, just becoming a better basketball player. I think we saw maybe a major step today.”

Abdur-Rahkman’s impact on the other end of the floor was even greater — he tallied a career-high 10 assists in 29 minutes of play, feeding his teammates over and over again as they streaked down the court in transition. It was part of an unselfish day from the Wolverines, who assisted on 28 of 34 field goals and ran away with the win.

While it’s clear that Abdur-Rahkman continues to diversify his game, caveats about competition level do still apply. Maryland Eastern Shore is no Wisconsin, and so it remains to be seen whether Abdur-Rahkman’s refined court vision and defense will carry over into conference play.

“(The coaching staff) hadn’t picked put that Derrick was going backwards and didn’t get the rebound, and it was killing our break,” Beilein said. “We’re doing some drills right now that make sure that we’re all busting out and flying. Nobody was busting out at all — everybody was just looking for Derrick —  and it was really slowing us down, so that’s really helped.”

That wasn’t the only aspect of Walton’s offensive performance that stood out the most, however — he also led the team with 21 points on 7-9 shooting, including an efficient 5-7 on 3-pointers. Beilein said after the game that he thought Walton was “affected by the trip to UCLA” and did not like the way Walton “carried himself” against Central Arkansas. So he had a conversation with his point guard about shooting more, instead of less.

“(Walton) was turning down shots, the ball was sticking like crazy,” Beilein said. “We talked about that the last couple of weeks but especially after Central Arkansas — what a talented player he is. He’s scored 1,000 points and he missed 16 games…‘You’re a really good player, and this team needs you to look at the basket.’ That was the message.”