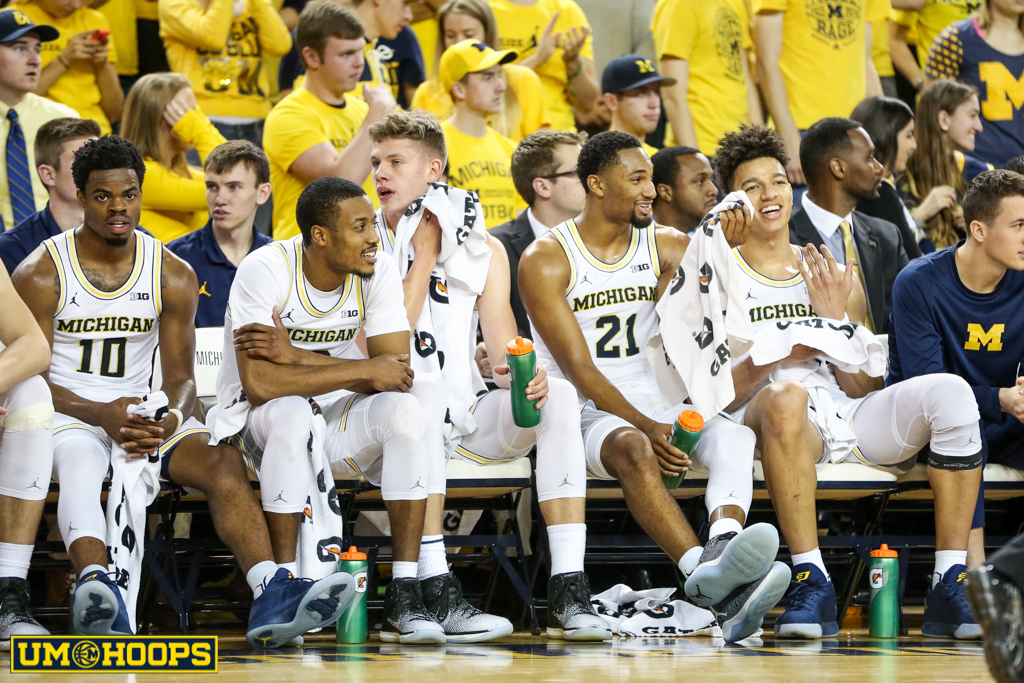 Michigan will wrap up its non-conference season on Thursday night against Furman before an extended holiday break.

John Beilein and his staff have been doing their best to make sure Michigan doesn’t get complacent after two blowout victories.

“When we see our guys get sloppy in practice, [we say], ‘Who have you beaten so far that you can really hang your hat on right now? That you know is going to be in the NCAA Tournament for sure?’”

The answer is nobody. As Beilein mentioned, SMU, Texas, and Marquette can certainly count as quality wins, but it’s too early to tell if they’ll be tournament teams, and that’s not the point. He wants to make sure the Wolverines don’t take any opponent lightly. So far, so good.

“We came to play these last two games after the UCLA loss, and I thought that was encouraging.”

Michigan built big leads early against Central Arkansas and Maryland Eastern Shore and did not let up. They’ll need the same approach against Furman, a clear step up in competition from those two.

“We haven’t played a team in a bit that had four shooters on the court all the time,” Beilein said. “We’ve had some really good individual players that we could key on, but now we’ve got four guys we have to guard from three-point range.”

The Paladins are not UCLA, but four of their starters will shoot from deep and the worst of them shoots 38 percent. If the Wolverines can lock down a third straight opponent, it would give them confidence going into Big Ten play that the defensive improvements from last season are real.

Furman figures to put up some actual resistance defensively as well. When defenders can’t prevent dribble penetration, it’s easy to get kick-outs for open threes. Michigan will have to work harder for its baskets than it has the past couple of games. When things don’t come so easy, the hope is that they don’t revert back to any of the bad habits we saw against South Carolina or Texas.

Michigan is the only Big Ten team not playing a conference game on either December 27, 28, or 30. After tomorrow’s game, the Wolverines don’t play again until January 1 (at Iowa), as one of their in-conference byes seems to come before the conference season even starts.

It’s odd, but it allows for an extended holiday break for the players.

Michigan will hold a workout Friday morning but not gather again until practice on the following Thursday, the 29th. Moritz Wagner will go home to Germany, a rare treat for him during the season.

“They need to get away now,” Beilein said. “We’ve been going since October 1. They need to go back and just be a kid again.”

Beilein said players will be encouraged to go to to a local gym and shoot at least once, but that’s about it.

“It’s a good cleansing time that maybe they need before they come back hungry to play.”

Until the season is over, of course, we won’t know the exact quality of Michigan’s schedule. But as far as RPI is concerned, having more teams like Furman on the schedule and fewer like Central Arkansas would be beneficial. When it comes to these guarantee games, however, Beilein doesn’t seem to care about splitting hairs.

“I don’t think it makes a difference,” Beilein said earlier this season when asked about how he schedules the six or seven guarantee games. “People say you have to play the leaders of each league. It’s never affected us one bit. You’ve got to show you’re willing to go to UCLA, willing to go to South Carolina, and you’ve got to get some of those wins.”

The acronym RPI was never spoken, but that’s what he was getting at. And, presumably, when he said the scheduling has never affected Michigan, he was referring to an NCAA Tournament bid. In that direct sense, he’s right. The Wolverines have been to the NCAA Tournament six times in Beilein’s nine seasons in Ann Arbor. The three years they didn’t make it, their record was not above .500. In other words, they’ve never seen their bubble burst.

But who’s to say that Michigan’s seeding—which is of course very important in the Big Dance—hasn’t been affected by playing teams with 300-level RPI?

The system can be gamed, but Michigan isn’t doing it. Instead the Wolverines have loaded the non-conference schedule with high major opponents (six in total) rather than worrying about the guarantee games.

Will the approach work out? The résumé would look a lot better if some of the underachieving teams on the schedule (namely Texas) can improve in conference play.