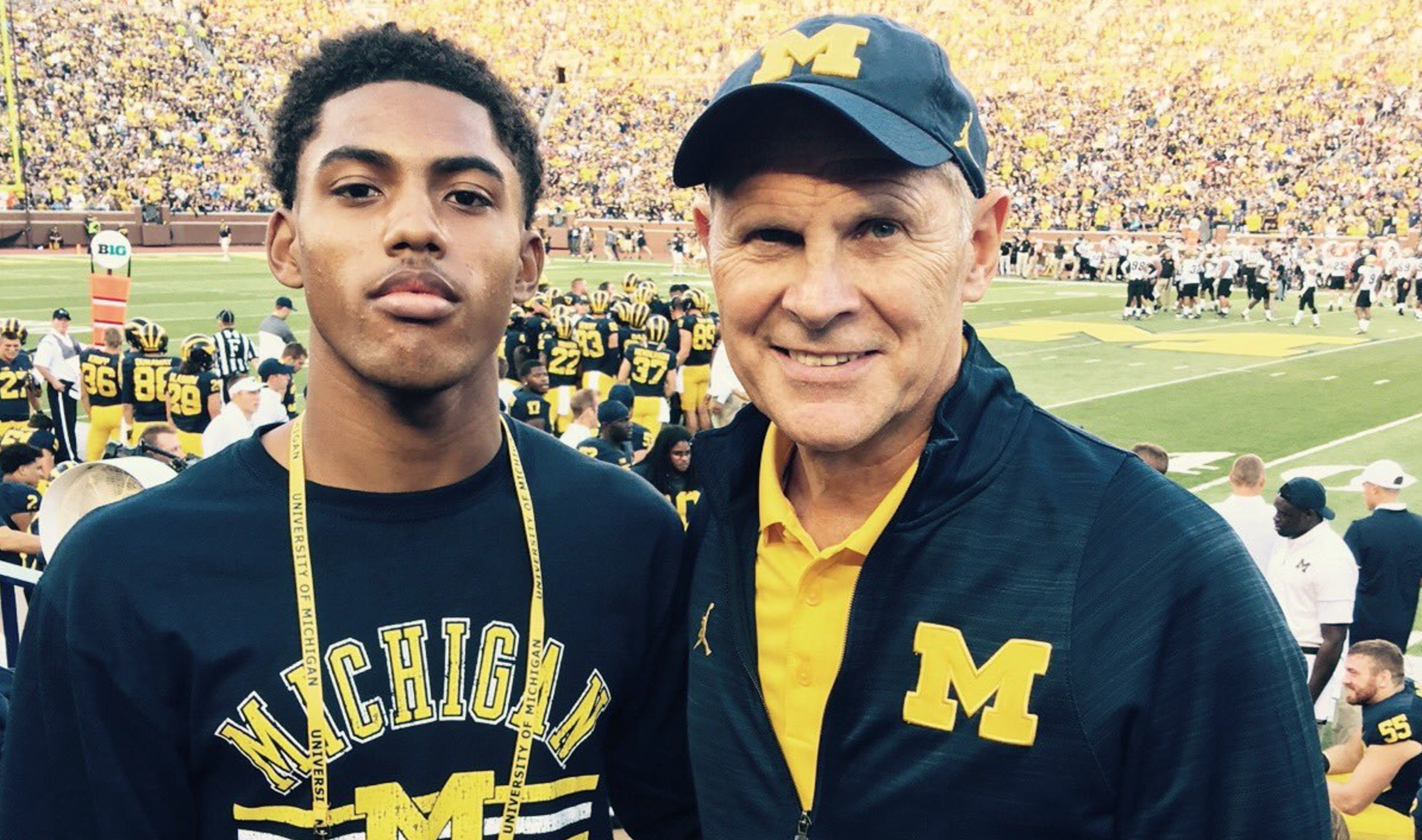 Michigan added its first class of 2018 commitment today as David DeJulius pledged to the Wolverines.

DeJulius transferred up from Detroit Edison (Class C)to East English (Class A) this season and has hit the ground running this season. He’s been putting up gaudy scoring numbers, averaging over 30 points per game, and put on a clinic in front of Michigan head coach John Beilein on Saturday.

DeJulius has been on Michigan’s radar for quite some time. He’s camped in Ann Arbor and he’s taken multiple unofficial visits. The Wolverines have been tracking the 6-foot point guard’s development, but it was his big night in front of Beilein that accelerated their relationship. He scored 46 points against Macomb Dakota and one of the state’s best point guard prospects in Jermaine Jackson Jr and it was an efficient 46. He was on 14-of-19 from the floor and was 9-of-13 from three while handing out 7 assists.

Less than a week later, DeJulius is a Wolverine.

DeJulius held offers from DePaul, Oakland and Detroit before Michigan offered him over the weekend. He had visited Michigan and Michigan State several times and had also garnered recent interest from Butler and Kentucky.

He’s a composite top-200 recruit, but doesn’t appear to have been evaluated by Scout.

DeJulius was measured at the Nike Elite 100 Camp this summer at 5-foot-11 without shoes with a 6-foot-3 wing span and 188 pounds. Generally listed heights are an inch or two above any measurement without shoes, putting DeJulius in the 6-foot to 6-foot-1 range.

In five games this season at East English, DeJulius has been lighting up the score sheet. Facing Flint Beecher, Cornerstone, Lima and Macomb Dakota, the point guard is averaging 33 points per game. He’s shooting 63% on twos and 39% on threes for a 61 eFG% and averaging five assists per contest in his junior season.

Here’s video footage of DeJulius’ big showing in front of John Beilein along with a look at his performance on the Nike EYBL 16U circuit this summer.

DeJulius is a scoring point guard. His jump shot has been improving consistently, but the bread and butter of his game is his ability to power his way to the rim. Standing 6-foot, 188 pounds, he’s got a strong frame and is comfortable finishing in different ways around the rim. DeJulius also plays very well in transition and shows the ability to find his teammates in full court and ball screen situations. He’ll also bring an immediate influx of toughness and strength to the Wolverine backcourt given his size, build and style of play.

Here’s an aggregate shot chart from Krossover of DeJulius’ performances this season and on the Nike EYBL circuit over the summer.

There was a lot of hype around Dejulius pairing with Greg Elliott at EEVP, and they showed us why. The two combined for 76 points, with 31 of those coming from Dejulius. Always known as a driver, Dejulius did that well. He’s 6-1 now, and built like a tank. You won’t stop him from getting anywhere on the court that he wants. His jump-shot as also improved. For a stretch against Flint Beecher, when Elliott wasn’t scoring, Dejulius took over, hitting several long-range shots, keeping the defense honest. The ‘Splash Bros.’ have made their way to Detroit.

A transfer from Class C DEPSA, DeJulius is one of the fastest and toughest PGs you will find. He can get to the rim whenever he wants and uses either hand and a very strong frame to finish inside. He has great top end speed that allows him to get shots off before opponents can reacts. DeJulius is also an underrated playmaker who will find teammates when driving to the hoop as well. He is a regular 20 point scorer who can go for 10 assists on any given night as well. DeJulius is one of the best PGs in the state and could help make East English a legitimate State title contender.

He’s “repeating” the 16U level, and playing against similarly aged players Dejulius’ physical advantages are really apparent. Has some Brent Darby in him with the way he uses his strength to operate when he gets his shoulder into a defender. He’ll get Big Ten interest this summer.

TJ Kelley ranked DeJulius as the No. 8 player in Michigan’s 2018 class and calls him the top scoring guard:

Arguably the top scoring guard in the class, Dejulius has and will score 30+ points while adding 10+ assists to any game.  He’s tough as all get out, tenacious, and holds HM as well as MM offers.

He also has an endorsement from DeShawn Sims.

been watching him and knowing Dave since a kid. 💪🏾💪🏾💪🏾

The first thing that jumps out is that DeJulius is the third player that Michigan has taken in three classes that should be able to play some point guard at the next level. The Wolverines have Xavier Simpson in 2016, Eli Brooks in 2017 and DeJulius in 2018. That could raise some eyebrows, but I don’t see why different combinations of this group can’t play together.

There are legitimate questions to ask about how much offense Simpson can provide and with Michigan’s two-guard look, the offensive firepower that DeJulius and Brooks bring to the table would complement him nicely. Michigan found itself facing significant depth issues at the point guard spot over the last couple of years and this is an important step to make sure that doesn’t happen going forward.

This is also a case where there’s a kid in your backyard, that is willing to ‘run through the doors to Michigan’ so to speak, and is improving by the game. You can only wait so long and if he scores 46 points in front of the head coach, maybe it’s time to offer.

I wouldn’t say that this closes the door on any other 2018 offers — Cormac Ryan, Brandon Johns, Robby Carmody or Jerome Hunter — but it probably does close the door on some of the other combos that Michigan was evaluating like Dwayne Cohill. Going forward, the focus should continue to be on wings and combo forwards to fill out the roster in that regard as the Wolverines look to fill the final 2 spots in the class.